The Panasonic RZ-S500W earphones are for listeners who want the absolute best portable noise cancelling. Its intensity adapts according to your environment, and scales through 50 levels of cancellation, rendering some sounds ¼ to ⅙ as loud as they’d otherwise sound. Other features include Alexa integration and touch controls, but the main selling point is undoubtedly the ANC.

Panasonic is renowned for its grade-A audio equipment, and the Panasonic RZ-S500W demonstrates, yet again, the company’s audio  prowess. These true wireless noise cancelling earbuds cost significantly less than Sony or Apple’s flagship earbuds, and offer even better active noise cancellation (ANC). Let’s see if there’s anything much to love beyond ANC.

Who should get the Panasonic RZ-S500W? The Panasonic RZ-S500W comes in a nice package with a very unique design: each touch panel is encircled by a perforated silver ring, which accents the black matte finish. I’m neutral on the design, but understand its appeal to anyone who prefers a subdued aesthetic. Both buds’ underbellies are branded with the Panasonic logo, which is also embossed on the matching charging case. Said case lacks a sturdy build: the hinge mechanism seems tenuous and ready to snap with an extra bit of force.

Each earbud is decorated with contact points for charging, which may trigger some listeners’ trypophobia. Inserting the earbuds into the case was easy, something worth noting as many earphones required me to be deliberate about placement in order to ensure charging. Medium ear tips come preinstalled on the earbuds and Panasonic provides five pairs of ear tips, ranging from XS to XL—all of which work well with the case’s cutouts. Touch capacitive panels are large and responsive, making them easy to operate even for the clumsy. A voice prompt notifies you when cycling between listening modes (noise cancelling on/off and ambient aware listening), and a tone beeps when adjusting the volume or controlling playback. You’re also afforded direct access to Amazon Alexa, or your default virtual assistant from the left touch panel. It takes a few minutes to commit the commands to memory, but they’re all pretty intuitive and easy to guess when in doubt.

Panasonic’s audio app is unique in that it appears no effort was put into the aesthetics of it. It covers just the basic functionalities: you can choose to prioritize sound quality or connection stability, select your preferred virtual assistant, and equalize the sound. I love the ability to adjust noise cancelling and ambient aware strength. However, for most, the most important thing about the app is the ability to download firmware updates. Props to Panasonic, because the app never crashed as I used it, which can’t be said for all audio applications. 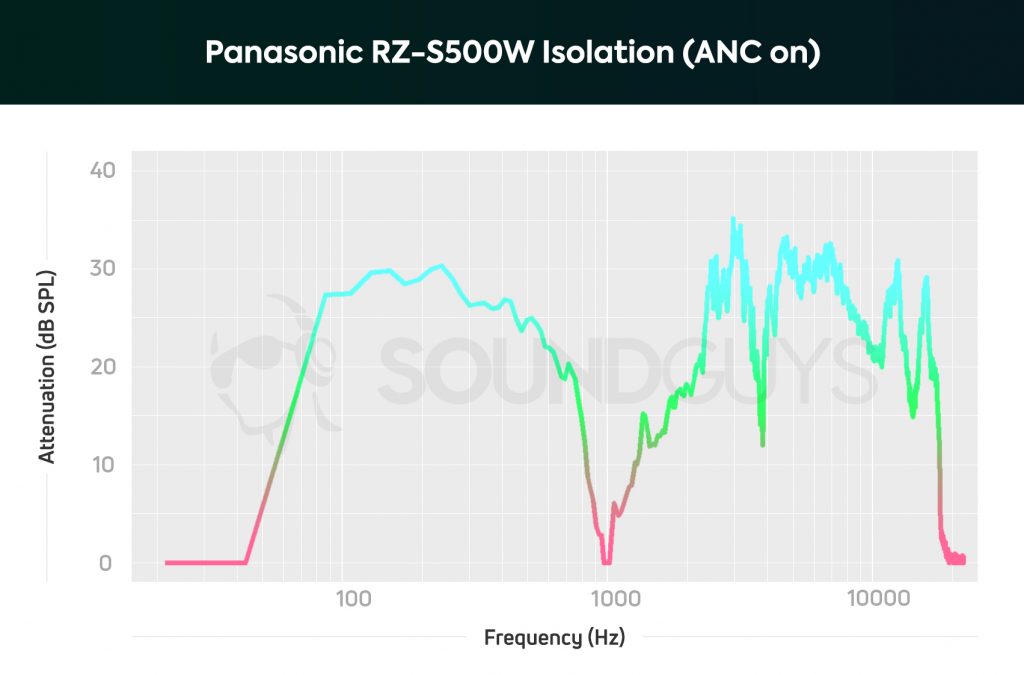 The Panasonic true wireless noise cancelling earbuds have such powerful ANC that I found it disorienting; testing was performed with the small ear tips.

Yes, the noise canceling is superb, and it uses a hybrid of feedforward and feedback ANC technology. ANC scales through 50 levels of intensity to adjust to your environment. The louder your surroundings are, the greater the ANC strength. As depicted in the chart above, upper-bass and midrange noise is effectively combated. In fact, some sounds like air conditioners are rendered up to ¼ to ⅙ as loud as they’d otherwise sound.

It’s actually so effective that, when on the highest setting in the app, I had a hard time using these earbuds for extended periods of time. The noise cancellation made me feel disoriented; worry not, though, as most people should be unaffected by this. Worst case scenario: you can adjust the intensity within the Panasonic app. 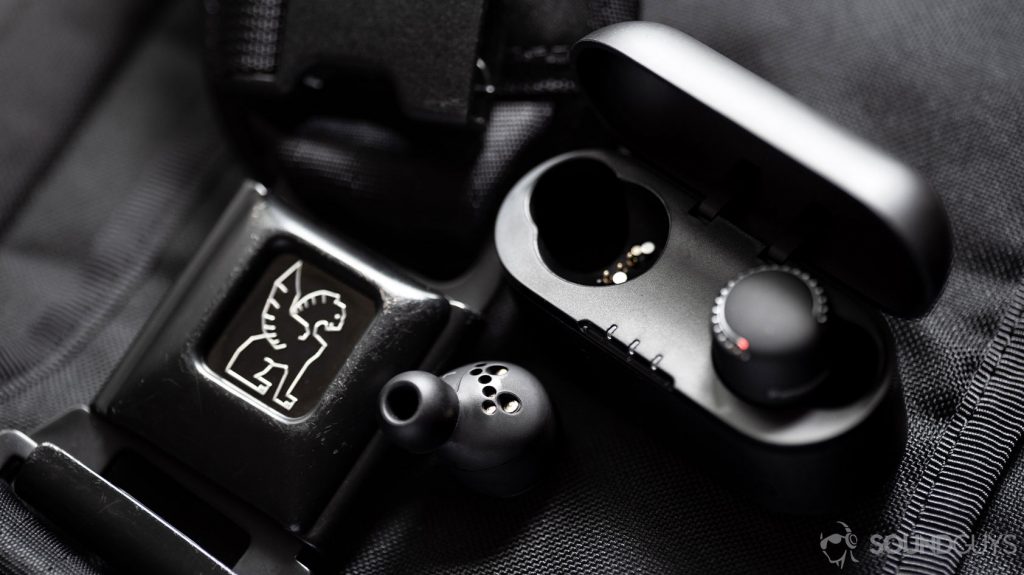 The earbuds support mono listening with either the left or right bud.

Connection strength was consistent with the Panasonic RZ-S500W, whether I listened in my apartment or while on a walk. Each earbud creates an independent connection to the source device, limiting latency and connection stutters. They come with Bluetooth 5.0 firmware and afford a 10-meter wireless range. Bluetooth multipoint isn’t supported, but the headset quickly and reliably re-connected to the most recently used device, which is a huge plus.

Bluetooth codec support is pretty standard for true wireless earphones: AAC and SBC are compatible with the headset, but not aptX. This means that Android users don’t benefit from consistent high-quality audio the same way iPhone users do, because AAC’s performance is unpredictable across Android devices. To add insult to injury, audio-visual lag proved problematic with my Samsung Galaxy S10e. When I watched Last Week Tonight, John Oliver’s words were delayed nearly half a second relative to the video.

In order to pair the Panasonic RZ-S500W:

According to the paperwork, pairing a different device later on requires you to remove the earbuds and tap and hold the left or right touch panel for seven seconds. At this point, the LEDs will alternate between red and blue. When connections are separately formed with multiple devices, the headset will attempt to reconnect to the last-used device when removed from the case. Unfortunately, I was unable to do this, and had to perform a hard reset when I wanted to pair a new device with the Panasonic RZ-S500W.

Our battery testing is consistent across devices; we subject each product to a constant 75dB(SPL) output until its batteries deplete. Under these conditions, the RZ-S500W earbuds lasted 5 hours, 36 minutes, which is a very long time for noise cancelling earphones.

An extra two charge cycles are allotted from the case, and fully charging the earbuds takes two hours; fully charging the case requires nearly 2.5 hours via the included USB-C cable. Some may find the lack of Qi wireless charging disappointing, but the case does support fast charging: 15 minutes in the case yields 70 minutes of playtime.

True wireless battery software has hit an inflection point: Apple announced that its AirPods line of earphones would support battery optimization, meaning the case will limit max charging to 80% until a full top-up is required. Your charging behaviors will be learned by the software, so it may then make calculated decisions on when to fully charge the earbuds, and when to keep them at 80% capacity. While there’s no word on this support for the Panasonic line of true wireless earbuds, it’s entirely possible that users could see this kind of feature with an update.

How do the Panasonic RZ-S500W sound? The RZ-S500W sound signature amplifies sub-bass and upper-midrange notes for a consumer-friendly sound.

The 8mm dynamic drivers relay a consumer-friendly sound by amplifying bass and upper-midrange notes. Although audio purists strive for a neutral frequency response, that’s not necessarily the best for everyone’s tastes. Anyone whose music libraries are brimming with hip-hop and pop hits will enjoy the Panasonic RZ-S500W sound signature. 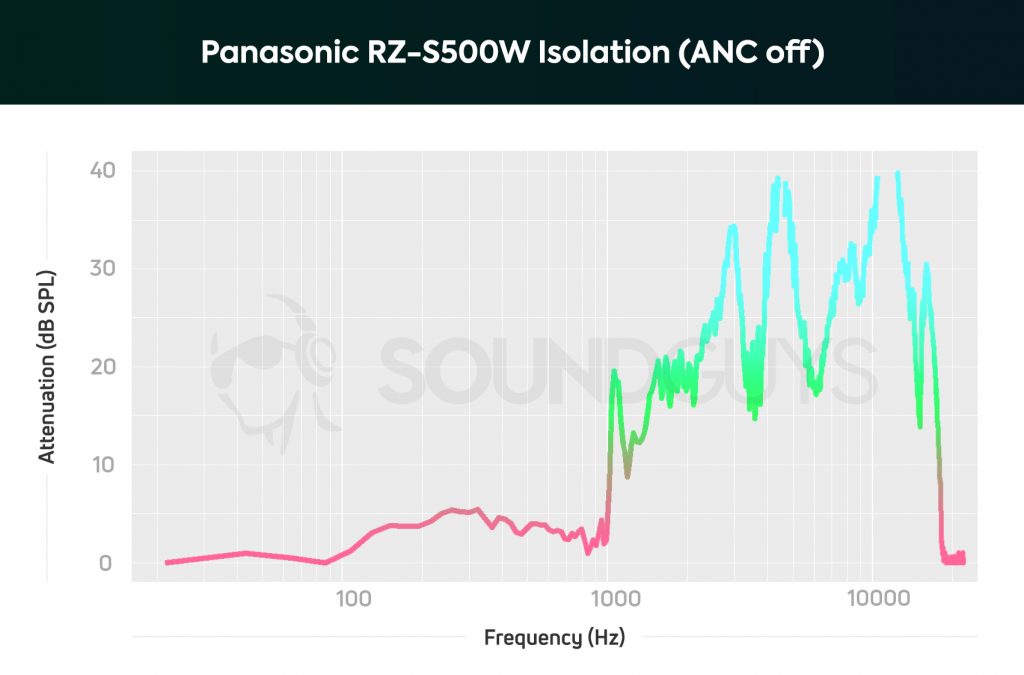 Passive isolation with the small ear tips is normal, and distant chatter is blocked out.

Passive isolation is good, and drastically improves noise cancelling, because the physical barrier between your ear drums and the environment is blocked. Actively blocking out external noise minimizes the effect of auditory masking; your brain isn’t stuck on trying to process distracting sound, and therefore has more bandwidth to detect and interpret sound from your earbuds. As you can see, passive isolation is what expect from in-ear headsets; the active noise cancelling is doing a ton of heavy lifting.

Editor’s note: the frequency response chart was recorded without any EQ processing.

Rainbow Kitten Surprise’s song Painkillers opens with a basic riff on the fifth and fourth frets of the low D and high D strings (drop-D tuning) of an acoustic guitar. A second guitarist plucks higher notes for a few passes until Sam Melo begins the first verse. Audio is reproduced clearly during the intro and initial verse because there aren’t any striking bass elements, yet.

At the beginning of the second verse, a kick drum keeps the beat of the song and makes it difficult to hear Melo sing, “My queen won’t feed on milk and honey…” at 1:19. The cymbals, however, are relayed very clearly thanks to the two emphasized treble crests. This clarity is consistent throughout the song which relies heavily on hi-hats and cymbals to accentuate the song, particularly during its bridges.

Frankly, I expected the auditory masking to be more distracting and prominent but the dynamic drivers do a fine job of reproducing clear audio.

Can I use the Panasonic RZ-S500W for phone calls? 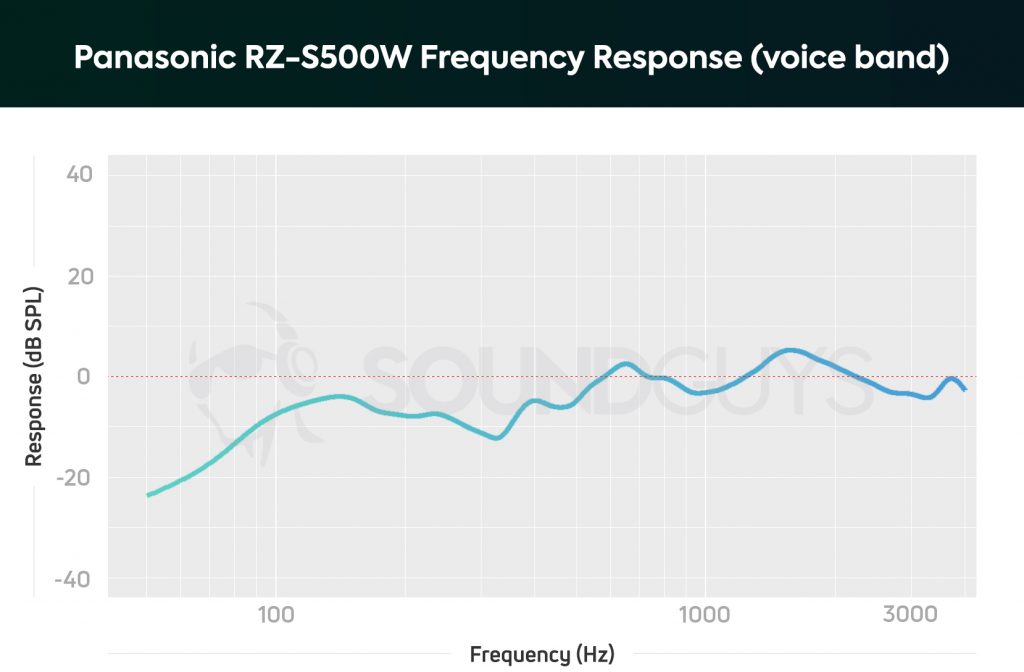 The attenuation below 600Hz is strategically engineered to combat the proximity effect while retaining speech intelligibility.

Much like other embedded microphone systems, the Panasonic RZ-S500W is tuned to de-emphasize low vocal frequencies in order to combat the proximity effect. This phenomenon occurs when a speaker comes too close to the microphone, resulting in a distorted recording with potential audio clipping. Panasonic went about this well and my voice sounds true to form; one thing that the microphones don’t do effectively however: block out background noise. The air conditioner in my apartment and my roommate’s laugh at the end of the recording can be heard below.

The Panasonic RZ-S500W does not have a voice passthrough feature or voice monitoring, so, while you’ll be able to hear the person on the other end crystal clearly, your own voice will sound muffled while you speak. The Panasonic RZ-S500W and Panasonic RZ-S300W are similar true wireless headsets with one main difference: the RZ-S300W lacks noise cancelling technology, which makes it a more affordable product. Larger drivers (8mm) are used in the RZ-S500W compared to the smaller drivers (6mm) in the S300W.

Again, these headsets share more similarities than differences: they both use Bluetooth 5.0 and support just AAC and SBC. Alexa integration is found with both Panasonic earphones as well as fast charging, but charging efficiency is greater with the S300W. Unless you need noise cancelling, the Panasonic RZ-S300W is a great alternative.

Should you buy the Panasonic RZ-S500W? The medium ear tips were the most comfortable for me, but others will be happy with the slew of provisions.

For the best portable noise cancelling experience, the Panasonic RZ-S500W are well worth the price. These earphones handily outperform the Apple AirPods Pro and Sony WF-1000XM3 with regards to noise cancellation. I didn’t find them as comfortable as Sony’s flagship buds, but that’s a highly-subjective matter. Sure, the Panasonic RZ-S500W doesn’t afford cool pairing and audio sharing features like the Apple AirPods Pro, and lacks the same audio processing capabilities found in the WF-1000XM3, but it remains a great option for anyone who puts peace and quiet first.

The Panasonic RZ-S500W scored a spot on our list of the best noise cancelling true wireless earbuds because of the quality of their ANC performance. However, if you’re looking for really great ANC true wireless earbuds overall, you might be better off with the Sony WF-1000XM3 because the app is a lot more user-friendly and the firmware is updated more often. Also, the ANC is still really great.

If you want wired noise cancelling earbuds, go with the Bose QuietComfort 20. They have excellent ANC and sound quality.