If you want a smart speaker with good sound quality, your options are limited. But the Google Home Max is impressive, even if the microphones have trouble picking up your voice when playing music at high volumes. Google probably isn’t the first name you think of when you think about home audio, but they’ve been slowly changing that with their Google Home lineup. Even though they’re technically speakers, it’s hard to say that the Home and Home mini were made for listening to music. They’re more for asking questions to the Google Assistant and maybe controlling your smart home appliances every now and then. That isn’t the case with the Google Home Max. This speaker is big, it’s beautifully designed, and what sets it apart from the rest of the line-up is that it was meant for music listening. But is the Google Home Max worth its price tag?

How to connect the Google Home Max The small lights behind the fabric light up when you speak or adjust playback.

When it comes to setting up a home audio system, it usually requires some confusion and a bunch of cables. That’s been slowly getting better (especially with some of the more expensive options like the LG SK10Y Soundbar), but that’s not an issue at all with the Google Home Max. It only comes with one cable and that’s the power supply. Setting it up is as easy as plugging it in and opening up the Google Home app. From there, the app walks you through step-by-step how to connect the speaker to your wireless router and get it ready for streaming. I’m not sure why you wouldn’t have WiFi, but if you’re getting this as a gift for someone else just know that WiFi is mandatory as there is no ethernet input if you want to connect it directly to a modem.

Once you’ve got it connected to your router then all that you need to do to connect to it is press the cast icon that pops up in the app you’re using. Most of the major streaming services, be it YouTube Music, YouTube, Netflix, Spotify, etc., have built-in functionality that will cause the button to pop up automatically in the app. But what makes the Home Max a smart speaker is that you can speak to it. If you don’t feel like browsing through your phone to find that new Childish Gambino song, you can just ask the Home Max to play Feels Like Summer thanks to tiny built-in microphones. Unfortunately, you can’t say “Yo Google” just yet, but “Okay Google” or “Hey Google” work just fine. 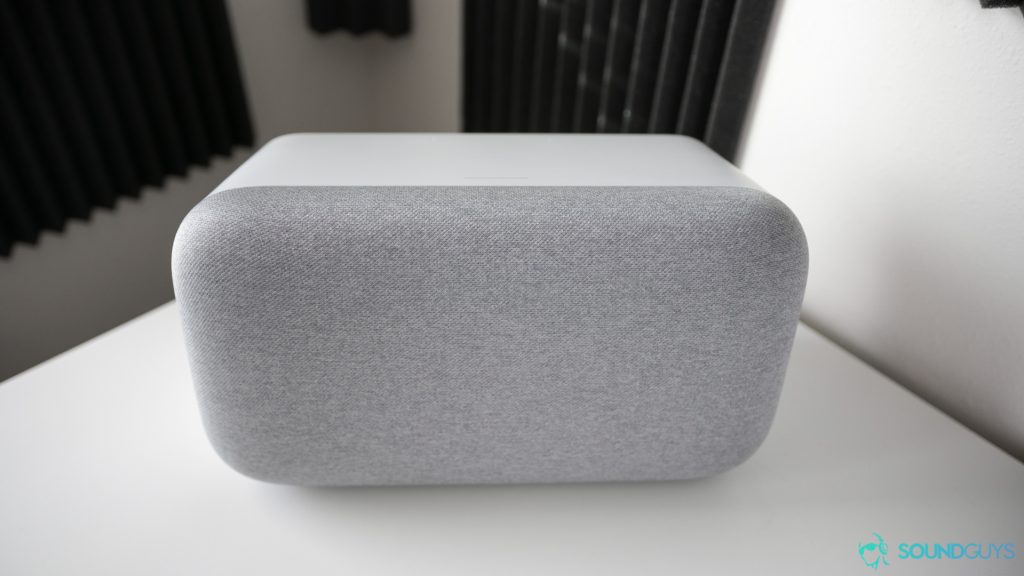 The Google Home Max has an acoustically transparent fabric that won’t get in the way of your music.

I did have some issues with the speaker hearing me when I spoke to it while music was playing, but I’ll get into that later. If you have a Google Chromecast, getting anything to play on your TV is seamless. Even pausing and playing the content is pretty quick and reliable just by telling the speaker to pause or resume playback. That said, browsing is basically impossible because you’re interfacing with your TV through voice. You have to know what you want to watch, and then tell the Google Home Max to cast it. Otherwise, you’ll have to reach for your phone.

Is the Google Home Max well-built?

At first glance, you’ll notice one thing about the Google Home Max: it’s big. Even if you compare it to other smart speakers like the Amazon Echo or Apple Homepod, the Home Max easily overtakes them in size. It measures 33.5 x 18.7 x 15 cm and weighs 5.3 kg, so no, it isn’t portable. This was made to be plugged into a wall and left there. As far as build materials go the housing of the speaker is just a smooth plastic that, surprisingly, doesn’t have any stains or marks on the white version we’ve been testing (it also comes in black). But the impressive part is the fabric used on the front. Google claims it’s “acoustically transparent” and while I’m sure that’s just a fancy way to say it doesn’t mess with the sound, it still at least feels nice to the touch. The fabric is thin enough for the lights to show through clearly and also feels nice to the touch.

Behind the fabric are four lights that only show up when you’re adjusting something on the speaker. They’ll turn off a second after you change the volume or after it’s done listening to what you said to it. Around back you’ll get the power supply input as well as a 3.5mm input and a mute switch. The mute switch doesn’t stop music playback, it just turns off the microphone so it isn’t always listening for the hotword. Speaking of which, I found that the microphones on the Google Home Max aren’t too good at picking up my voice when music was playing around 75% or above. I found myself borderline yelling “Okay Google” and sometimes, even then I would just have to walk over to it and physically lower the volume.

I tested this by playing the song Havana by Camilla Cabelo at four different volumes (25, 50, 75, and 100 percent). Then I played back a recording of myself saying “Hey Google” and played it from a separate speaker at distance of 5, 10, 15, and 20 feet. Sure, this isn’t the most scientific test ever devised but it does highlight how at higher volumes the microphones on the speaker have a hard time picking up voices. On the back are the input and a switch that lets you turn the mic off.

As far as design is concerned, the Google Home Max looks great wherever you decide to put it. Taking a step back from the details in build materials, one of my favorite things about the speaker is its simple and minimal design. Besides the switch on the back (which will probably be facing the wall anyway), the Google Home Max is just one block of plastic. There aren’t are knobs or buttons to take away from the smooth design which makes sense since most of what you do is with your voice. There is a touch sensitive area on one side of the speaker that’s responsible for volume control or pausing/playing music, but that’s it. And because you can orient the speaker vertically or horizontally that touch-sensitive bit can either be on top or on the right side. One helpful feature is that a voice will tell you when you’ve accidentally turned the speaker turned upside-down if you’re moving it. 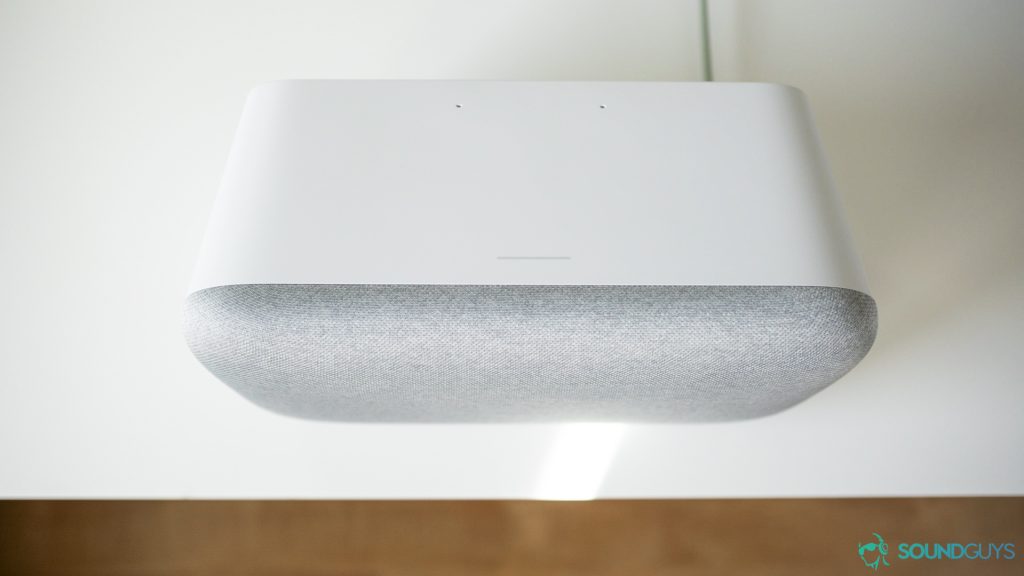 On the top (or the right side if vertical) is a touch-sensitive section for playback and volume.

Sound quality is where the Google Home Max sets itself apart. Google knew that if they were going to make a speaker this size meant for listening to music, that it had to sound good. One way it decided to make that happen was by adding their own algorithms that allow the speaker to self-adjust its EQ depending on where you place it using six internal microphones. The team at Google calls this feature Smart Sound and though I can’t prove it, I can say that whether I put the speaker on top of a marble countertop or on a table in the corner of the room the sound remained consistent enough that I couldn’t tell there was a difference.

Normally, if you place a speaker in the corner the low end sounds amplified, almost like putting your smartphone in a cup. But the Google Home Max self-adjusts in order to make sure the sound stays consistent. This is good if you don’t feel like going through the trouble of EQing your music yourself, but not so good if you do because you won’t have that level of control. All you get is the basic bass and treble sliders in the Google home app.

Because of the large size, the Google Home Max can really push some air so the low end is fairly strong just because of physics. In the song Moon River by Frank Ocean the low E string is a little too strong for my taste, but it gives the song some grittiness and never gets in the way of his vocals in the midrange, which is what counts. The rubber bass pad also keeps the rumbling of the speaker from disturbing anything around it.

The slight emphasis in the lower frequencies will probably be a positive for most people because of its subtlety. It doesn’t overpower the mids at all and when paired with how loud this thing can get, so it’s perfect for powering your parties. That said, it sounded good even at low volumes and I ended up using it to play music in the background throughout the day as well.

Vocals in the song Generator ^ Second Floor by Freelance whales were still plainly audible even with all of the other instruments joining in the during the chorus at around the 2:17 mark which includes plenty of thumping drums and bells ringing throughout. Speaking of the bells, one of my only issues regarding sound quality has to do with the high frequencies. It sounds like Google played it safe here and didn’t give them the same kind of emphasis as it did with the lows, which is understandable. When was the last time you heard someone say “Drop the bells”? There isn’t much noticeable distortion at max volume, but there also isn’t a ton of reverb to hi-hats and cymbals which can really help with the soundstage of your music. The Google Home Max has an acoustically transparent fabric that won’t get in the way of your music. The fabric is thin enough for the lights to show through clearly and also feels nice to the touch. The small lights behind the fabric light up when you speak or adjust playback. On the top (or the right side if vertical) is a touch sensitive section for playback and volume. On the back are the input and a switch that lets you turn the mic off.

It’s hard to recommend a smart speaker over a dedicated home audio setup or any other Bluetooth speakers, but the Google Home Max has weaved its way into my life in a way other products haven’t. I admit, I’m already in the group of people that use a Google Home, but that’s mainly for setting alarms, timers, and asking it questions while I cook. With the Google Home Max I still do all of those things, but all while listening to music or podcasts.

If you’re comparing it to something like the Amazon Echo, don’t bother. The Google Home Max sounds way better. The other major competitor is Apple’s Homepod which sounds good and also self EQ’s itself, but also requires you be an Apple Music subscriber. The Google Home Max is the best option for most people, and even though it’s expensive I think it’s worth it. Just try not to yell too loudly at it.