The mountains are calling.

In a perfect world, everything you record outside would be flawless with rumbling lows and smooth vocals. Unfortunately, it takes a lot of trial and error to feel 100% confident working with audio, even in a controlled environment. In field recording where you can’t control your workspace? Yikes.

Once you step outside, the number of variables increase significantly. Still, as long as you have the right gear and know how to use it you should be able to get perfectly usable audio. If you need some pointers don’t worry: we’ve got you covered.

What types of mics are best for field recording?

You can’t just grab your Rode NT1-A condenser mic off your desk and run outside to start recording. Well, you can, but it won’t sound good. Nothing against that microphone—I personally own one—but it’s just not the right kind of mic for this situation. If you’re going to be field recording, you’ll want either a lav mic, a shotgun mic, a dynamic mic, or even just a digital recorder.

The lav microphone is very commonly used outside because of its portability. Whether you’re a reporter on the go or making a short travel vlog for your YouTube channel, lav mics are small and easy to use. If you’re short on audio engineers and are doing everything yourself, being able to get clean audio from something that fits in your pocket can be powerful. You can plug it right into your camera or voice recorder and get crispy clean audio all by yourself. Lav mics are really good at capturing sound as long as they’re close to the person speaking. 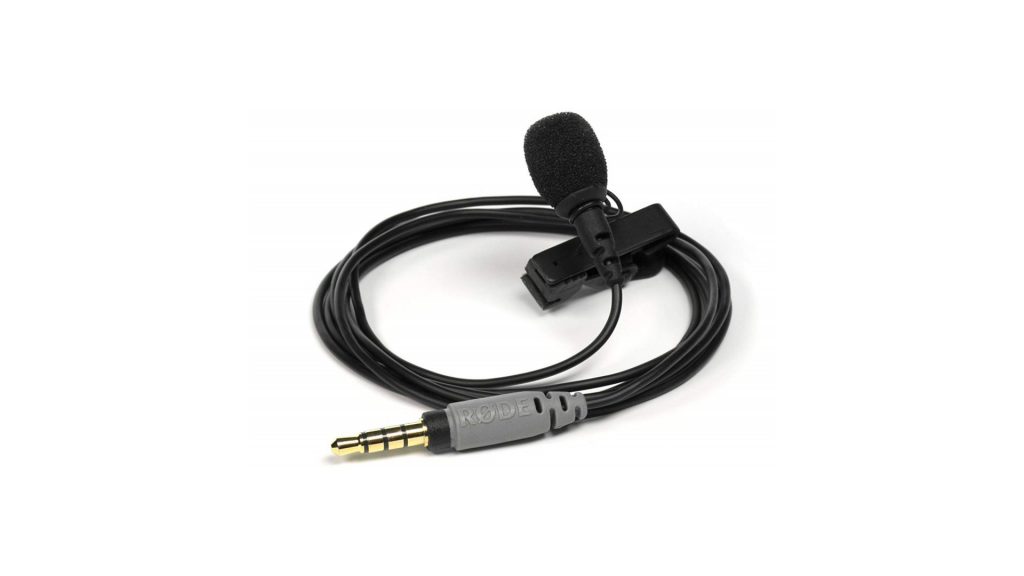 Lavaliers are small and super portable, making them easy to use while on-the-go.

This is why you’ll usually see them clipped to a person’s button-down or collar. One downside to using a lav is that it has little to no padding, so a slight bump will probably clip your audio as you’ll hear in the clip below when our extraordinary podcast producer, Adam Doud, removes the lav from his shirt. Another is that because they have to be so close to the mouth of the person speaking, they basically always show up on camera. This is fine if you’re an on-screen reporter, but not so great if you’re looking to record a film where microphones typically aren’t in the scene.

If you’re able to spare some more room in your kit, one of the most popular mics for recording outside is the shotgun microphone. If you’ve ever seen a behind the scenes shot where some poor soul is holding a long stick with a microphone at the end, that’s a shotgun mic. These have a very forward pick-up pattern, which means it won’t pick up too much sound happening to its sides. This is why shotgun mics are usually pointed directly down at the person speaking. In the case of something like the popular Rode Videomic, it gets attached to the camera and points directly at the person speaking. 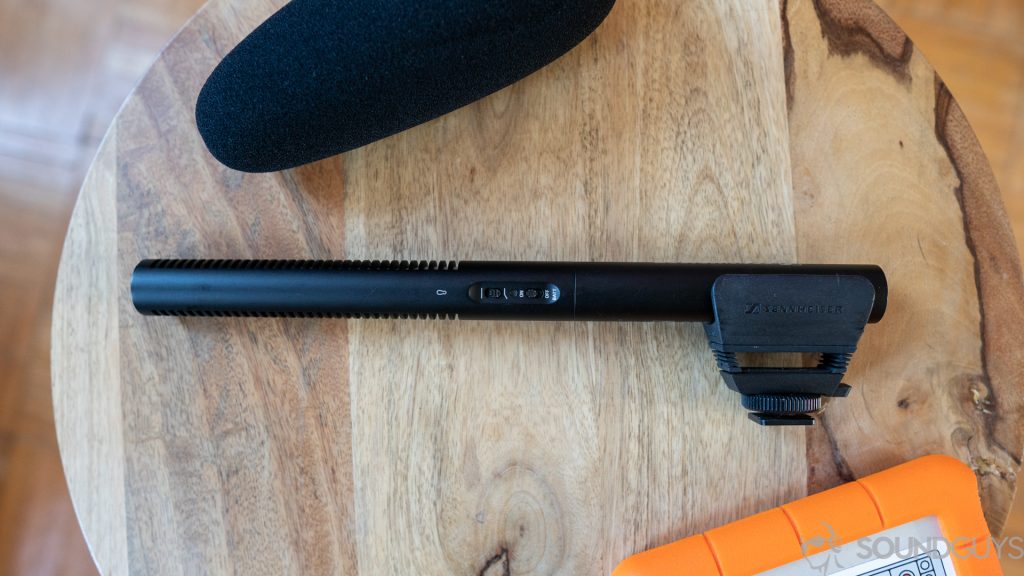 The Sennheiser MKE 600 is a shotgun mic with a supercardioid polar pattern.

The good thing about using a shotgun microphone is that you can usually get very clear sound without the microphone being visible on camera. It’s also extremely good at only picking up sounds that are directly in front of it, and ignoring ambient noise that’s coming from off-axis. Unfortunately, the bad thing about a shotgun mic is that, unless you have it mounted to your camera, you’ll likely need another tripod or second person to make sure it’s always pointed correctly at the audio source. It requires accuracy, and if you’re pointing it a little too far to the left you’re going to record diddly squat. Another con is that these mics are usually fairly large and not the most portable option, not to mention expensive. 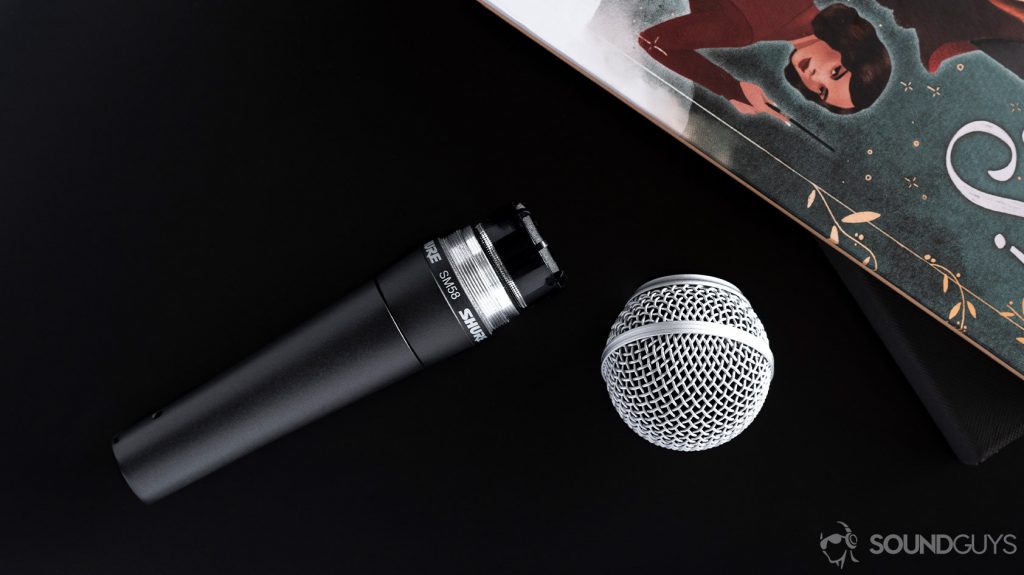 The grille is easy to remove and replace if it becomes damaged.

Dynamic microphones are pretty much just great at recording anywhere, especially if you get one like the Shure SM58, which is basically an industry standard. When you see a reporter interviewing someone and passing the microphone back and forth, this is usually the kind of microphone they’re using. While dynamic microphones are like swiss army knives that can be used almost anywhere, the downside is that they sometimes require some more gear. For example, if you go with the Telefunken M80 or Shure SM7B, you might need a Cloudlifter in order to give it enough power. It’s not the end of the world, but also not as convenient as something like a lav mic for run-and-gun outdoor recording. Still, the improvement in sound quality might be worth it depending on the kind of sound you’re going for. 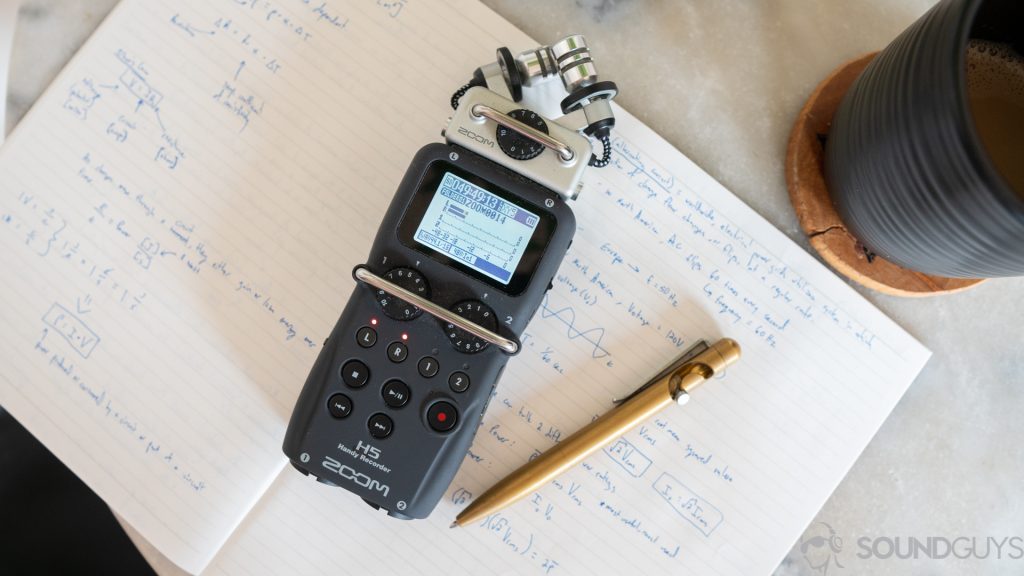 The H5 is one of the most versatile voice recorders around.

The last way to get quality audio outside is just getting a good ol’ fashioned digital recorder. Some, like the Zoom H1n or the Zoom H5, are8 pocketable and super easy to use. Just turn it on and press record. The good thing about recorders is that, just like a lav, they’re usually fairly portable. Even the bulky H5 can squeeze into a jacket pocket if you really need it to. The bad thing is while they work wonderfully in a pinch (like this interview where basically all of my gear failed on me on the spot), you won’t always get the best vocal sound quality when compared to something like a shotgun mic. That said if you’re looking to record ambient sounds to fill out your project these are usually perfect for that. Just drop it on a table, hit record, and voila, perfect ambiance. These are great for capturing sounds to add your own effects into the recordings. You can hear me use the Zoom H5 for exactly this reason in our very first podcast episode at around the 0:37 mark.

How to combat wind when field recording

Nature can be great, but it can also be a nuisance if you’re trying to record outside. Unless you’re reporting live from the eye of a hurricane, it’s unacceptable to have windy audio. Besides crackling and making it harder to hear your subject, it’s also just super annoying to listen to. So how do you fix this? 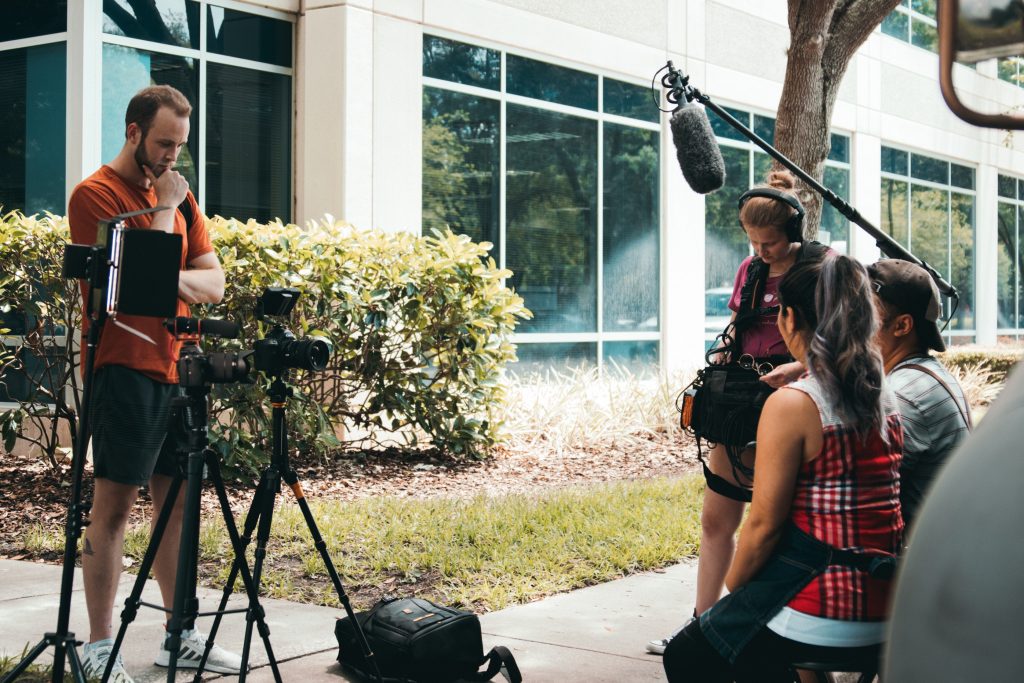 Pexel: A dead cat, like the one seen on the dangling microphone, significantly reduces wind noise.

The most effective way to reduce wind noise is something called a windshield. For regular outdoor use, you can probably get by with just the foam that comes with most microphones. In more intense wind, you’ll have to use something gruesomely referred to as a dead cat.

Thankfully, the name is a bit of a misnomer—it’s actually made of synthetic materials instead of poor ol’ Fluffy. This is that infamous furry cover that you put around your microphone. Not only does it make it look like the tail of a very fluffy cat, but it also helps reduce wind noise. The fur will break up and disperse the wind before it actually gets recorded into your microphone. Using one of these can be the difference between getting usable audio and you needing to go out and re-record (if you’re even able to).

Tips and tricks that you should know for field recording

I already discussed some of the best microphones for field recording, but why do they make the cut when others don’t? Aside from practical reasons like size and portability, one key reason is their polar patterns. A polar pattern is basically a graphical representation of the directions a microphone can pick up sounds in.

The Shure SM58 has a cardioid (heart-shaped) pattern which is perfect for picking up sounds directly in front of it and slightly off to the sides as well. This is great if you’re going to be moving around or constantly holding out the microphone so someone else can speak. In short, your placement doesn’t have to be perfect every time since the microphone can pick it up anyway. In field recording that flexibility is super helpful. 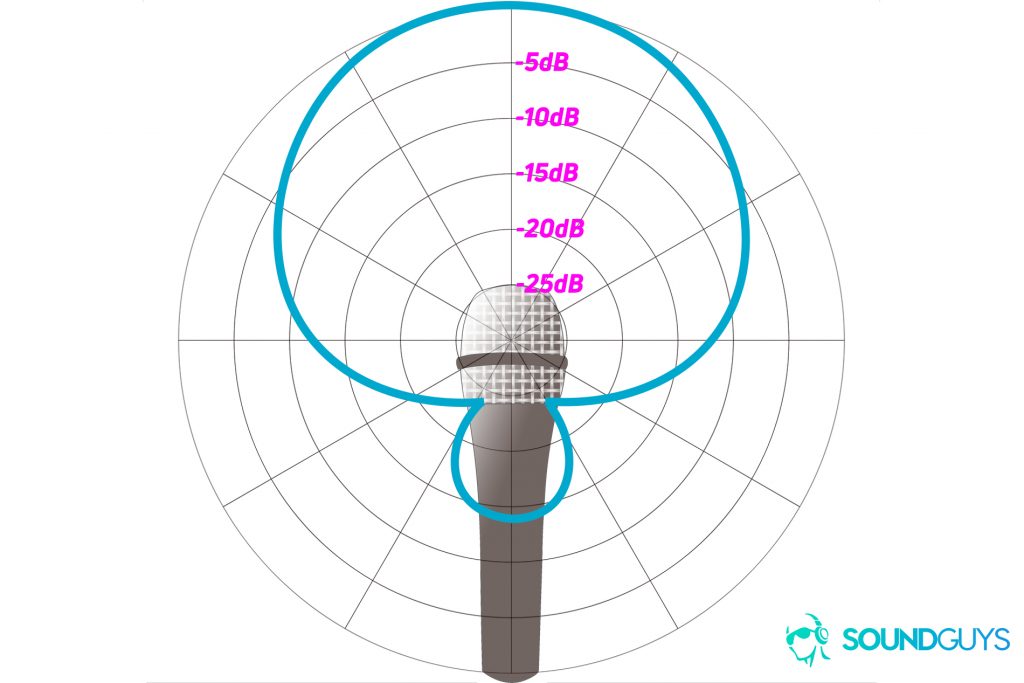 Shotgun microphones are usually supercardioid or hypercardioid. This pattern doesn’t give you much flexibility as you need to be aiming it pretty much perfectly at the audio source at all times, but it does the best at picking up only the sound you want and nothing else.

Unless you’re on a set, keep it light

While field recording, you’re probably going to be moving around a lot. The last thing you want is to have to set up your laptop, audio interface, and tripods at every location. If you’re looking to get in and out, keep it lightweight. While that’s easy to do with lav mics, it’s a little more difficult with something like a shotgun microphone. 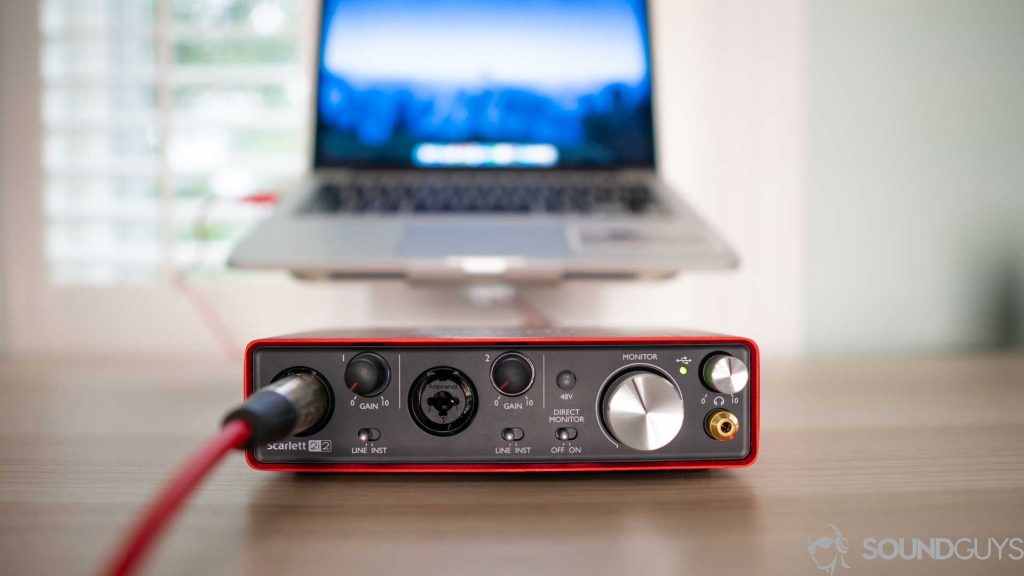 An audio interface and laptop in your bag are going to weigh you down.

In that case it’s probably best to also invest in a digital recorder like the Zoom H5. Not only is it a great outdoor recording option thanks to its built-in mics, but there are also two XLR inputs on the bottom so you can record straight to a memory card without a computer at all.

Have fun with sound effects 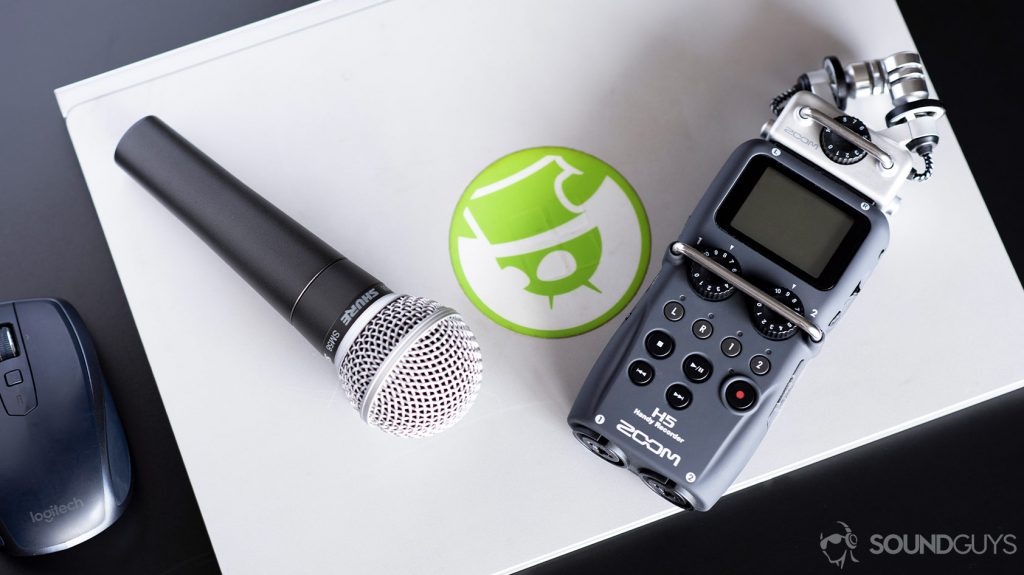 Since the microphone doesn’t require phantom power, it pairs well with handheld recorders.

This might sound cheesy, but if you’re field and experiencing less than ideal conditions, just lean into it! If you’re capturing decent audio, you can turn almost any weird sound into a fun sound effect to add to your final project. A loud crowd walking by may seem like a nuisance at the moment, but instead of throwing that audio in the trash you can save it to use at a later. Just make sure to name it something descriptive like “LoudCrowd.wav” to make it easier to find later.

Using programs like Adobe Audition or Adobe Premier, you can use different audio filters, like high pass and low pass, to clean up some of the sounds of rain or wind. However, adding software filters can make audio sound artificial, which is worse than the occasional noise in the background. Try to follow the steps in this article before going the software route—it will always sound better.

The ultimate guide to audio connections