Push through the bad and you'll find some good.

While the Skullcandy Push might not be the nicest pair of buds on the market, it nails some of the most important aspects of a good pair of buds including battery life and fit.

Editor’s note: This post was updated on August 23, 2021, to add a section on isolation and to reformat the review with a content menu.

Who should get the Skullcandy Push True Wireless? 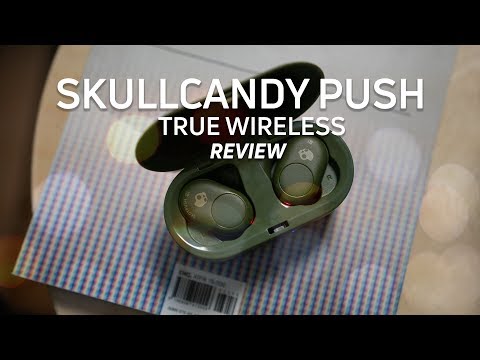 How well built is the Skullcandy Push True Wireless?

The charging case pops open with the push of a button and houses the buds perfectly.

If you were hoping for a premium pair of buds, the Push Wireless is going to disappoint. The charging case doesn’t try to be anything other than just a case. There aren’t even magnets to keep the case shut; instead, it relies on simply clicking shut. On the inside, there’s a perfect cutout for each earbud which holds them nicely and it even magnetically snaps the earbuds into place which is super satisfying.

Unfortunately, the case is also bulky by true wireless earbud standards. Easily not as pocketable as what you’ll get from something like the Beats Studio Buds or even the Anker Soundcore Life A1 true wireless earbuds. In short, this isn’t a well-made case, but it is definitely well designed. It never opens accidentally and there’s no fumbling around to get the earbuds to fit properly thanks to the internal magnets.

The earbuds are bulky like the case, yet they still fit rather well in my ears. The method of inserting them into your ears requires a small twist which helps the tiny wing tips lock these into place. While they might not be great at isolating outside noise, they do a good enough job of blocking out incidental noises from a local cafe. Only occasional noises came through like a loud laugh or the crash of plates. Each earbud also has a single large button on the side. These are for playback controls and for turning each one on or off individually.

The case is made of cheap plastic, but it does feature magnets on the bottom that allow the earbuds to snap in perfectly.

Most important of all, they stay in no matter what I do thanks to Skullcandy’s FitFin wing tips. Whether I’m doing laundry or walking to the local burrito spot, these make a solid everyday companion. Skullcandy says these buds are water-resistant, but they don’t seem to have an official IP rating. So best to be mindful of that if you plan on using these exclusively at the gym or during any kind of strenuous activity.

How do you control the earbuds?

Playback controls all work perfectly as well. A single push of either button pauses or plays music, while double taps on the right and left earbuds to raise and lower the volume, respectively. Then you can hold each one down for two seconds in order to skip between tracks and a triple tap on either ‘bud will access the personal assistant of your device. While they work fine, it’s not the most pleasant experience as you’ll clearly hear the loud, cheap plastic button being pushed right in your ear. But hey, as long as it works right?

Does the Skullcandy Push have noise cancelling?

The Push Wireless isn’t great at isolating much, but they do a decent job with some ambient noises.

With the Skullcandy Push you have to rely solely on passive isolation to block out noise. You won’t find any active noise cancelling, which is good news for your battery life. It’s bad news if you want to eradicate low-pitched hums, like on airplanes. If, however, you want to remain aware of your surroundings, but just dial back the high-pitched ambient sounds, the Push will do that.

Does the Skullcandy Push stay connected?

The earbuds are fairly bulky but also do a great job at staying in your ears.

The Skullcandy Push true wireless earbuds is rocking Bluetooth 4.2 and doesn’t skip a beat when connected to my Pixel 3 smartphone. Only when I was testing range did the music skip, but that’s the point of the test. Anywhere within roughly six meters is fine, and only once you add a wall or two will you encounter problems. Even when watching videos isn’t any noticeable lag or lip-sync issues.

Somehow, Skullcandy seems to have nailed one of the hardest things to get right: the connection. While the Push Wireless doesn’t have any of the convenient auto-connect features of W1/H1 products or the seamless switching between devices, it’s surprisingly on-par with general connectivity. The earbuds don’t auto-pause when you take them out of your ear so that’s something to keep in mind.

How is the battery life of the Skullcandy Push True Wireless?

Learn more: How long do AirPods last, and can you make them last longer?

Once you run them dry, you can pop them in the case which holds one extra charge cycle—not great considering how big the case is, but better than nothing. On the bright side, these charge via USB-C.

Skullcandy Push true wireless earbuds
All prices listed in USD unless otherwise specified. Prices may change over time, and vary by region. Unfortunately, we cannot list Amazon prices on the site, as they vary greatly by currency.

How does the Skullcandy Push True Wireless sound?

As expected, the Skullcandy Push has a slight low-end emphasis but it isn’t overpowering in any way.

As far as sound quality is concerned, the Skullcandy Push true wireless earbuds isn’t bad at all. Of course, there’s the characteristic low-end bump you’ll find in the frequency response of any consumer headphones. The bass response is exactly what I look for in a pair of buds.

Of course, it isn’t as precise as some higher-end pairs of cans and depending on the song there is still some masking of the mids that goes on, but overall it’s better than I was expecting. A good example of this is in the song Far Nearer by Jamie xx where the bass hits are there, but it masks some of the synths in the background.

On the flip side, I don’t have a single complaint about the highs. The fingerpicking squeaks and scratches throughout the song Dirty Paws by Of Monsters and Men have just the right amount of detail without sounding too loud or “shrill.”

Can you use the Skullcandy Push for phone calls?

As far as the microphone is concerned, it isn’t great with these. Microphone quality has a drop off at around 200Hz which means that if you have a lower voice it’s not going to come through as loud as it should be. For a sample of this, you can check the video up above where I have a voice sample but fair warning, it doesn’t sound great. So if you’re looking for a pair of buds for phone calls these might not be for you.

Should you buy the Skullcandy Push True Wireless?

In the end, I was really impressed with the Skullcandy Push. If you can overlook the cheap, plastic, bulky build then this might just be for you. The buds have a great connection strength, sound good, and have decent battery life for a pair of true wireless earbuds. Most importantly for me though, is that they fit amazingly well. So while it’s not the sleekest and prettiest of the true wireless buds, it’s solid.

If you’re thinking of buying the Skullcandy Push True Wireless, keep in mind that the price you’ll pay will depend on the color you pick. This is available for as low as $39 USD in some colors, but can go up to to $62 USD for the grey color.

How does the Skullcandy Push True Wireless compare to the Apple AirPods (2019)?

The Skullcandy Push True Wireless uses ear tips to create a proper seal with your ears, leading to better isolation performance than the Apple AirPods (2019). The Push True Wireless also has a longer-lasting battery than the AirPods, providing a playtime of around 6 hours and 21 minutes. However, the AirPods feature a higher quality build, and deliver more consistent connection performance, thanks to its inclusion of the Apple H1 chip.