Shure BT2 review: A hefty price to pay for versatility

If you're already deeply invested in Shure's products, the BT2 likely makes sense: it lets you take your favorite high-end Shure earphones out and about without sacrificing too much regarding audio quality. For most though, paying nearly $150 for a cable seems unfathomable, irrespective of codec compatibility. 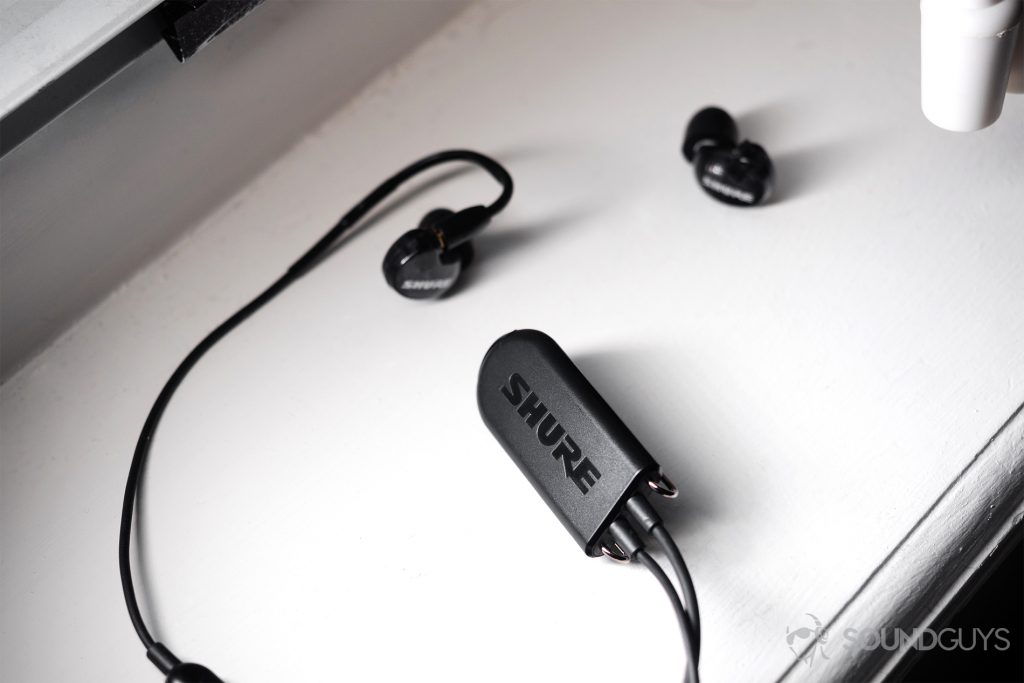 Choosing between wired and wireless earbuds is a pain: yes, wireless ‘buds are convenient but the sound quality is sub-par, and wired ones sound great for the price but tangled cables are aggravating. Shure has remedied this quandary, at least for its customers, thanks to the Shure BT2. This cable transforms the company’s wired into wireless ones with a slew of high-quality codecs supported. For nearly $150, though, the BT2 drives a hard bargain and may not be justifiable for many of us.

Who is the Shure BT2 for?

This cable is highly specialized in that it’s aimed at listeners who already own Shure products like the acclaimed Shure SE215. In theory, the MMCX-terminated cable should work with any MMCX earphones, but Shure advises against swapping cables between varying Shure earphone models, let alone cross-brand interchanging. 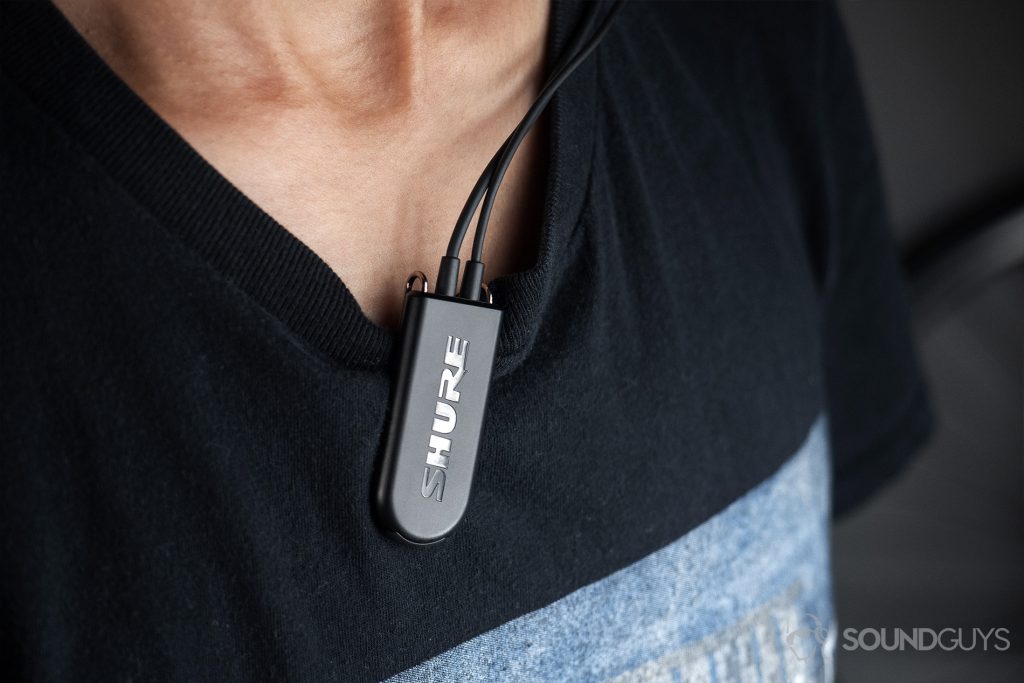 The pendant may be large, but it’s surprisingly lightweight and functional.

Initially, I was put off by the cumbersome pendant dangling from the two cables. After all, it’s pretty unsightly. It only took a day or two for my tune to change, though; the clip pressing against the pendant’s rear effectively tames what could easily have been an unwieldy and unsightly battery brick.

What’s more, it’s not clunky for clunkiness’ sake: the suspended piece contains the battery and a dedicated headphone amplifier. It also houses the wireless components that facilitate Bluetooth 5.0 support, which is backwards compatible with all Bluetooth sources.

If you want to prevent the wires from flailing about, a tough cable management slider is attached to the left side. On the right cable sits an integrated mic and remote, which is easy to use thanks to the separated tactile buttons. The integrated mic and remote work flawlessly, and controls can be made accurately while wearing thin gloves.

About two inches before the MMCX connect the cables transition from flimsy to stiffy, yet pliable. This allows listeners to loop the earbuds in an ear hook fashion, and in turn, it mitigates microphonics and creates a stable fit.

Detaching the Shure earbuds, in my case, the SE215, from the cable is a hit or miss process. Sometimes, the earbuds are removed with minimal effort and other times, I feel ready to wipe sweat away from my brow. I’m sure there’s a trick to it; I just don’t quite know it.

The mic is good

During day-to-day use, the mic is more effective than my LG G6’s microphone. Just be careful that it’s not brushing against a coat collar as there were multiple times where I didn’t realize this was happening and it pained my conversation partner. 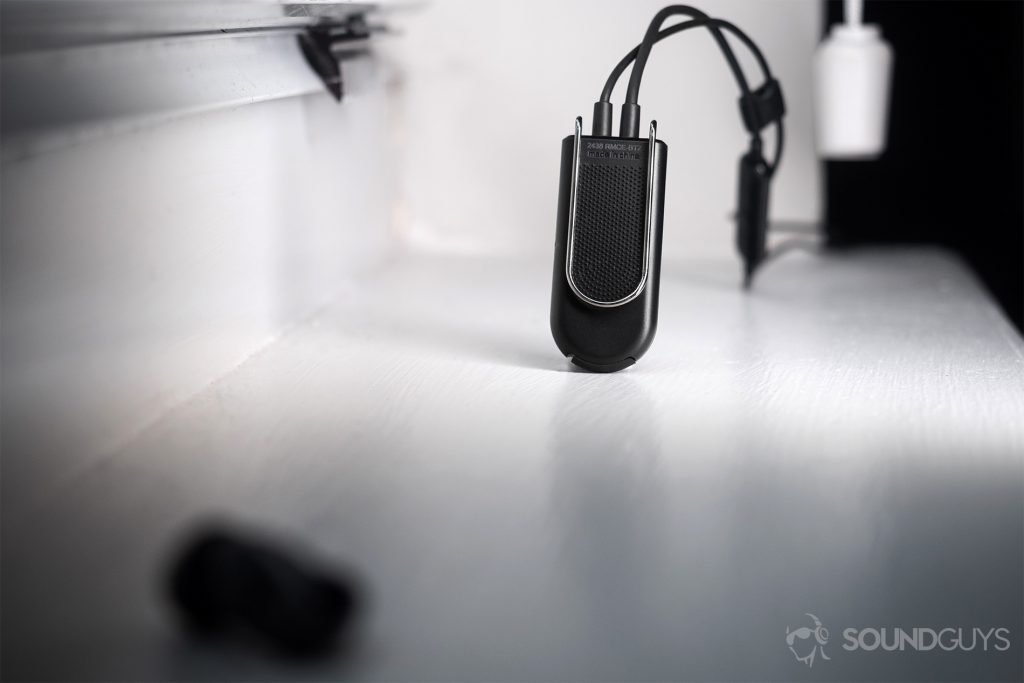 The Shure BT2 allows for just over nine hours of constant playback and charges via micro-USB.

After subjecting the Shure BT2 to a constant 75dB(SPL) output, our testing revealed a 9.13-hour playback time. Although this is shorter than the stated 10 hours of playback time, most of us won’t listen at such loud volumes for nine hours straight. If you listen and varying quieter volumes, you’ll likely pass that 10-hour mark.

Charging the cable takes a few hours via the included micro-USB cable. It’s disappointing and surprising that Shure opted for this older charging method that’s being phased out, especially given that the BT2 supports a plethora of high-quality codecs.

The Bluetooth 5.0 support is a marketable feature, and the BT2 effectively maintains a consistently reliable connection within the given 10-meter range, but the more interesting inclusion is the array of supported codecs.

The Shure BT2 is an upgrade from the BT1 because it offers complete Qualcomm aptX and AAC support, unlike the BT1 which only streams media via SBC.

Although it’s a sad reality that AAC is really best used with iPhones, the option to stream music over aptX, aptX HD, and aptX Low Latency is a welcome feature. If for some reason your phone is having trouble maintaining a connection to any of the codecs, you can force it by enabling your Android phone’s developer settings.

Should you buy the Shure BT2? The MMCX connectors are gold-plated and fit snugly into the SE215 female inputs.

Frankly speaking, a $149 cable is a hard sell no matter what kind of codec support it offers. If you’re a Shure fanboy or just really want to take your SE535 earphones with you sans wires, it’s justifiable, but for $149 you can grab yourself a nice pair of true wireless earbuds instead—or some excellent wireless earbuds.

That said, if you want to ensure that you’ll be compromising as little as possible when listening wirelessly, it’s a solid buy, but maybe wait a few months to see if the price becomes more reasonable.

Shure BT2
9.2
MMCX connectors for most Shure Sound Isolating earphones provide hour after hour of listening enjoyment with the freedom of wireless and simplicity of BluetoothCompatible models include Shure SE215, SE315, SE425, SE535 and SE846Bluetooth version 5 is backward-compatible with all Bluetooth sourcesUp to 10 hours of play time, 350 hours of standby time, and 32.8' of rangeSupport for multiple codecs, including Qualcomm aptX audio, aptX HD, and aptX Low Latency, as well as AAC and SBC