Unless you're after true wireless options now, these are still a solid deal if you can find them on sale.

IPX7 build
Playback buttons
Offers most of what X4 offers, but for $30 less

Though the Jaybird X4 is the better wireless earbuds, it's hard to knock the Tarah's. They offer most of what makes the X4 special, for less money. Unless the few subtle differences between the two are complete deal breakers for you, it's hard to recommend the X4 earbuds over the newer Tarah. 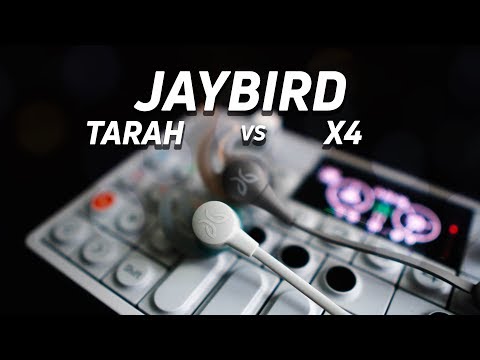 Jaybird has been at the top of the Bluetooth earbuds market basically since the product category was a thing. When the Jaybird X4 buds were first released, we came away fairly impressed. Then almost immediately after the company came out with the Jaybird Tarah earbuds, which provided most of the good things we liked about the X4 at a cheaper price. But how did they hold up over time?

Editor’s note: This post was updated on March 2, 2021, to address an FAQ about the best workout earbuds.

Who are the Jaybird Tarah for?

How do the two compare in terms of build quality? The Jaybird Tarah come with a slightly more rounded shape than the X4 did.

It doesn’t make sense to talk about the new Jaybird Tarah buds in a bubble. We can’t avoid comparing them to the X4, especially since the releases were so close to each other. So what are the differences? Well first, there’s the general look and feel of the headphones. Where the X4 seems more sleek and modern, the Tarah comes across almost whimsical. Even the charging cradle that comes with the Tarah looks more fun compared to the utilitarian design of the one that came with the Jaybird X4. Granted, it’s still a charging cradle which is annoying, but I still think it’s a step in the right direction.

The control module is also slightly bigger and has a slightly more square shape to it, but I actually like it more than the X4 because it gives the buttons more real estate making them easier to find and press when you’re wearing them. Not that it was hard on the X4, but it’s definitely easier on the Tarah. The only other difference physically I can find is the shape of the earbud housings and the ear tip nozzles. The Tarah even has what was arguably the standout feature in the Jaybird X4 which was the IPX7 water-resistance rating. The Jaybird Tarah’s don’t come with a carrying case.

It might be easier to discuss the Tarah in terms of what it doesn’t have. When you open the box, you won’t be greeted with the nifty carrying case that comes with the X4. Or with the memory foam earbuds or any of the other ear tips. Where the Jaybird X4 allows you to mix and match ear tips and ear wings, the Tarah comes with just three hybrid tips (S, M, L). I didn’t have any issues with the fit of these, but it does mean that those with picky ears will have fewer options to play around with to find the perfect match.

As far as I can tell, these are just as good as the X4. In the few days I’ve had them I only had one weird issue with playback that resolved itself as soon as I restarted the headphones, so I’m chalking it up to a random glitch. Besides that, the connection is just another aspect that both Jaybird products have in common. The playback controls also work perfectly and share the same controls as the X4 as well. The plus and minus buttons obviously control volume, but also let you skip between tracks if you hold them down. The middle down acts as a multifunction button for pausing/playing music, answering or ending phone calls, and activating Siri or the Google Assistant. Then there’s the app which is the same across all Jaybird devices. You can customize EQ settings and even find your headphones if you misplace them somewhere.

The Jaybird X4 have better battery life than the Jaybird Tarah The charging cradles are slightly different, but the X4 still beats out the Tarah’s in terms of battery life.

This is probably the biggest difference between the Tarah and the Jaybird X4 buds. Where the X4 promised around eight hours of constant playback, you’ll only get six with the Tarah. It’s not big of a deal in everyday use as I’m sure most people aren’t working out for more than six hours at a time, but you feel notice this difference over the course of a few days. Though it’s worth mentioning that both pairs offer quick charging features, so a few minutes on the charger will get you through a last-minute workout.

Headed to the gym? How long do you typically listen to music while exercising?

If your workouts tend to last an hour (which this poll we ran on Twitter confirms), then you’ll be recharging these two or three times throughout the week compared to just once or twice for the X4. Again, it isn’t a huge deal but it’s one worth mentioning. Especially since it’s the biggest difference between the two headphones.

What’s different about the songs these Jaybird buds sing? The ear tip nozzles on the Tarah’s have more of an angle to them, letting them push sound down directly into your ears.

When it comes to sound quality, this is just one more aspect of the two headphones that’s more or less the same. As far as I can tell, there’s no real difference in sound quality between the two, and even if there was you can still use the Jaybird app to EQ them to your preference just like the X4. It could be because of the lack of memory foam tips, but the low end does seem a little less strong here. That said, it isn’t so different from the X4 that you can’t change it just by picking a different preset.

This is most noticeable in the song Submission by Gorillaz, where the thumping bass sounded lower than it did on the X4’s. If the X4’s were given a slight emphasis in the lows then the Tarah’s were given a little extra in the mids. Bass kicks don’t get in the way of vocals as much in the Tarah’s as they do in the X4’s, but the Tarah’s are also a little less clear so pick your poison.

You can hear this in Generator Second^ Floor by Freelance Whales where it’s hard to differentiate between vocals and instruments at times. Again, this is me just being nitpicky because for all intents and purposes, you’ll get more or less the same experience regardless of which pair you get. The only difference worth noting was that I noticed the Tarah’s sounded louder than the X4’s. Not because they have a greater output, but because the nozzles are angled differently, and seem to shoot sound more directly down my ear-canal.

Should you get the Jaybird Tarah earbuds?

Jaybird seems to know that their target audience is people who exercise, and those people tend to not want to spend upwards of $100 on a pair of earbuds for the gym. In the X4 review I stated that they were the pair to get because of the added IPX7 rating, but not even a month after that initial review it changed because now there really isn’t a reason to get those over the Tarah’s. The Tarah earbuds offer the same IPX7 rating, the same controls, and more or less the same sound quality.

The biggest difference is the battery life which is six hours instead of eight, but I’d say that’s a worthy trade to save around $30. If you don’t mind spending the extra cash then maybe the Jaybird X4 is the one for you, but the Tarah’s still had the same appeal as they did when they first came out. Similar specs, build, and design for less money. Now that the Tarah’s are around $50, they’re still a better deal since the Jaybird X4 will run you around $100.

What about the Jaybird Tarah Pro?

But what about the true wireless options? Both buttons may be remapped to adjust volume or access a designated virtual assistant.

Since the release of the X4 and Tarah earbuds, Jaybird has also released a pair of true wireless earbuds in the Jaybird Vista. They’re rocking an IPX7 build as well (just the earbuds, not the case), a strong connection, auto-connect, decent battery life at around 5.5 hours, and even USB-C charging so no more charging cradles. That said, they’re not without their issues either. They aren’t the most comfortable pair of buds and they’re also not cheap. If you want to experience a true wireless pair of buds from Jaybird, be prepared to spend even more than you would on the original AirPods. If you still don’t like anything you’d like to bring to the gym with you, then you can always check out some of the other pairs that made our best workout earbuds list. The IP57 rating means the Elite Active 75t are resistant to dust and water.

If you wanted something that you could also use casually outside of the gym, then check out the Jabra Elite Active 75t. These true wireless earbuds have Bluetooth 5.0, a transparency mode to hear what’s going on around you, killer battery life, and solid microphones for calls. Sure, they’re sweat-resistant so you can still get good use out of them in the gym but at the same time they’re made to be a constant companion throughout your day. So whether you’re going for an evening run or just commuting home, it’s hard to beat these at any price point.

Are these the best earbuds for working out?

The answer to this question depends on what you personally prioritize in a pair of workout earbuds. If you care a lot about affordability, water-proofing, and the ability to customize the sound signature, then they're definitely a top contender. Many people, however, prefer true wireless earbuds, or want something with a longer battery life or more options for ear tips, in which case we'd recommend exploring other workout earbud options.

Are the BeatsX a good alternative to these?

They were at the time of the release but now the BeatsX are discontinued. Instead you should look at the newer Beats Flex earbuds which are cheaper and have a longer battery life than the BeatsX. Though it's worth mentioning that neither of these have an IP rating that protects against sweat or water damage, while the Jaybird Tarah has a waterproof IPX7 build.

Because we haven't had a chance to run an objective test on the Jaybird Tarah's microphone, all I can provide here is subjective information. The Tarah's microphone isn't going to be winning any awards anytime soon because it does pick up quite a bit of background noise. It's definitely not the best for taking calls in noisy areas.

What are some Jaybird alternatives?

If you want workout earbuds, the Jabra Elite Active 45e have an IP67 rating, a stable fit, and support quick charging so you don't need to worry about getting to the gym only to realize your earbuds are dead. The best sounding workout earbuds out there are the Bose SoundSport Free.