The Jaybird X4 has been discontinued you but you can get it refurbished for a cheap price.

Kind of uncomfortable
Mids are lacking in clarity
Battery life is good, but still falls just short of the claimed 8 hours

The Jaybird X4 dosen't make any drastic changes to the wireless earbud formula that's been working so well for Jaybird. But the addition of an IPX7 waterproof certification makes these a tangible upgrade to the previous models. 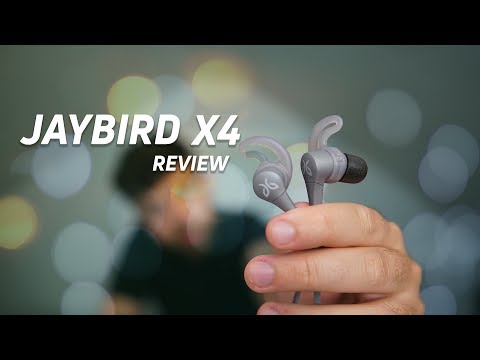 Jaybird was one of the first popular Bluetooth earbuds for fitness. The Jaybird X3 blew the competition away when they came out, and the true wireless Jaybird Run were good, but not mind-blowing. Jaybird plays to its strengths with the Jaybird X4. So are they any better than the previous models or is it the same ‘ol story with a different cover? Let’s find out.

Editor’s note: this review of the Jaybird X4 was updated on July 15, 2021, to address product availability.

Who should buy the Jaybird X4?

Finally, a waterproof build in a Jaybird product The control module on the Jaybird X4 is just as slim and functional as its predecessor.

Let’s jump into the biggest upgrade with the Jaybird X4 earbuds: waterproofing! One of my big complaints with the previous Jaybird X3 earbuds was that they weren’t waterproof, they only had a sweatproof coating. The Jaybird X4 take that sweatproof coating, and raise you an IPX7 waterproof certification which means that you no longer need to be worried should you get caught in torrential rain or drop these in a pool.

An IPX7 rating means you can submerge them for up to 30 minutes in up to a meter of water. These aren’t the first earbuds to have a sweatproof coating and an IPX7 certification, but it’s a welcome addition to the Jaybird line-up even if it is the company playing catch-up. The Jaybird logo is now painted on the earbuds.

Besides that, there really aren’t too many differences in how these look and feel. The story is similar to the last time with emphasis put on refining the line instead of re-defining it. They’re still made of plastic (which is good because it keeps them light at about 14.7 grams), and the control module is still super slim. It’s almost exactly the same as on the Jaybird X3, which isn’t bad considering how slim that control module was as well.

The only other new features I could find had to do more with design than with build quality. The Jaybird logo is now part of the paint job instead of imprinted on a cheap metallic sticker, the wing tips just have one big hole now instead of a ton of smaller ones, and the nozzle on the all-gray model is painted blue, and I’m all for it. No one will know but you whenever you change the ear tips, but that’s why I like it. It’s your little secret. The new Jaybird X4 earbuds have a new wing tip design when compared to the previous version.

The control module has three buttons on it and, just like the previous module, they all work fine and I had no problem reaching for them while running to adjust volume or skip between tracks. Speaking of running, I was a huge fan of the plastic cinch on the cable that lets you adjust the cable. The Jaybird series has always had it, but I was never able to make it work for me and just ended up wearing the earbuds dangling under my chin. These are the first time I was able to wear them comfortably behind my head, without needing to worry about them slipping out of my ears. So yeah, the fit is pretty great. Especially when you swap out the silicone ear tips for the memory foam ones (which also help with isolation).

Unfortunately, everything is a give and take. Although the memory foam tips helped with isolation they were surprisingly uncomfortable, and I picked the smaller of the two pairs that come included in the box. But I’ll gladly trade a slight discomfort for better sound any day of the week.

Bluetooth and the Jaybird app The Jaybird X4 now have an IPX7 waterproof build.

Connection strength was average for what you’d expect for a Jaybird product, which means that it’s better than good enough but not amazing Practically, I had no issues. I didn’t experience any skips while running or when I was wearing them while I was walking around my room, and when I was testing range I didn’t have any dropouts until I reached out 30 or 40 feet. So even by regular Bluetooth standards: it’s pretty legit. Again, practically I had no complaints, but the nerd in me still wishes these had Bluetooth 5.0 to at least help with battery life.

Playback controls were also intuitive, and I didn’t need to look in the instructions to figure it out. You can adjust the volume by tapping the plus or minus buttons and skip between tracks by holding them down. Then there’s the multifunction button in the middle which acts as a pause/play button (or answer/end call button) when tapped, and gives you access to Siri or the Google Assistant on a long press. The memory foam tips help with isolation, but are surprisingly uncomfortable over long periods of time.

Then there’s the Jaybird app that you can connect to with your Spotify account and play music through, though I don’t know why you would. What’s actually useful is the EQ presets that you can sift through to change how your music sounds. And if you don’t find one that you like you can always make your own and save it as a preset.

Then there’s battery life. Jaybird claimed 8 hours on the previous X3 earbuds and pretty much hit the nail on the head. With the Jaybird X4, nothing has changed. They claimed 8 hours of constant playback and in our testing, we got 7.5 hours. So yeah, it’s safe to say that whether you’re going to be commuting to work, or hitting the gym after you won’t have to worry too much about these dying on you. To charge them, just pop them on the charging cradle just like the previous version, and plug them into a USB port. Still annoying, but at least Jaybird is consistent.

How do the Jaybird X4 sound? The nozzle on the Jaybird X4 is a bright blue color (at least on the gray model).

Though you can change the way these sound via the app, I kept these on the “flat” profile which is how they’re set fresh out of the box. Even still, the Jaybird X4 ‘buds seem to have a slight emphasis on lower notes. The thumping bass kicks in the song Generator ^ Second Floor by Freelance Whales wasn’t overpowering at any point, and I’d say that the slight push actually helped me hear the music a little better while I was running outdoors.

The Jaybird X4 have a slight bass bump which means their sound signature will help boost your energy during workouts.

Lower notes are usually the first to go when there’s outside noise and the extra umpf helped nicely, though you might be disappointed if you’re used to the exaggerated bass of something like the Beats Powerbeats. But if you do fall into that category, you can always just pick that sound profile in the app. I wasn’t a huge fan of the mids and it’s probably because these seem to emphasize vocals a little too much over other instruments. This was apparent in the song Street Lights by Kanye West where his already autotuned voice was masking some of the softer elements in the background. Again, not bad if you want to sing along to your music while you’re working out, but not the best for hearing the nuances in your favorite tracks.

Should you get the Jaybird X4?

The Jaybird X4 has been discontinued, but you can still buy it refurbished from Amazon. If you don’t want to go the true wireless route and prefer good ‘ol fashioned earbuds, then yes you should definitely get the Jaybird X4, or look for a newer alternative. These are a solid pair of workout earbuds that can withstand even the toughest workouts. While they’re not perfect, the pros outweigh the cons in this case assuming you can find them for a decent price. If you already have a pair of Jaybird X3 earbuds then you probably don’t need to go rushing to order these. That said, there is one aspect of the headphones that to me, makes them an easy recommendation over the previous versions and that’s the IPX7 waterproof certification.

If you want to go with some less expensive earbuds that will get the job done, we got you covered. But if you’re ready to make the jump to a pair of the internets favorite workout earbuds, then Jaybird X4 earbuds are a solid choice. Even if the X3 earbuds go on sale, I’d still rather have the peace of mind of IPX7 certification plus the sweat proof nano-coating, but that’s just me.

What about the Jaybird Tarah? The Jaybird Tarah’s doesn’t come with a carrying case.

The Jaybird Tarah are essentially the budget Jaybird X4. They have the IP67 rating of the X4 but with a slightly different build. They don’t come with a carrying case or memory foam ear tips, and they have 6 rather than 8 hours of battery. But beyond these small differences they are essentially the same earbuds for cheaper.

The Jaybird Tarah Pro are more expensive, but arguably worth it

What's a good alternative with a better microphone?

The 1MORE Dual Driver ANC Pro are in a similar price range, have an IPX5 rating, and have a much better microphone.

Do the X4 make any noise when you turn them on?

Yes, when you power on the earbuds, a female voice announces that you have powered them on.

How is the microphone quality for calls?

Truthfully, it's not great. The microphone picks up a lot of background noise and the tone of the quality isn't very clear. It will work in a pinch, but you're better off using the microphone on your smartphone.

Can I get the Jaybird X4 on sale?

Are the BeatsX a good alternative to these?

Yes, the BeatsX are a great alternative to these as long as you're okay with the lack of an IP rating that protects against sweat and water damage. That said, the ship has sailed on the BeatsX as they are discontinued. Instead you should check out the newer Beats Flex which do basically all of the same things for half the price.

If you want to stay within the Jaybird realm, the Jaybird Vista are a great choice. With an IPX7 rating, great isolation, and wing tips make these great workout 'buds. Unfortunately, they do not come with adjustable wing tip sizes, and can become uncomfortable during longer workouts. They have a mild bass response. If the Jaybird Vista are too pricey for you and you're worried about comfort, the Tozo T10 are a great budget true wireless option. They have an IPX8 rating and a slightly heavier bass response than the Jaybird Vista. They don't have wing tips, so stability is a little less ensured.