Google has a long way to go with headphones.

Terrible isolation
The charging case is nice, but putting them back in is a mess
Battery life is sub-par
The adjustable loop needs adjusting with basically every use
Sound quality isn't up to snuff with other wireless earbuds

If you're thinking of getting the Pixel Buds, just don't. They're not a bad pair of earbuds, but they're overpriced and imperfect. At this point, you're better off just waiting for Google to hopefully release a new pair at some point.

True wireless earbuds are all the rage now, which is why Google releasing the Pixel Buds were somewhat confusing. After all, they’re just regular wireless earbuds. Not true wireless. But considering I’ve never been a huge fan of the Airpods which are the most popular headphones on the planet, I was all too ready to a Google version that still had a wire connecting the two earbuds. I figured it would solve two of my main concerns when it comes to true wireless earbuds: connectivity and accidentally losing one. Despite negative initial feedback from people who had bought the Pixel Buds, I pulled the trigger and bought myself a pair. So how do they hold up now in 2019? Even after a few weeks of use the plastic build of the earbuds still looks brand new.

One of my biggest issues with the Pixel Buds is the charging case, but oddly enough it’s also one of the best things about the headphones. It’s wrapped in a soft fabric that feels great in the hand. In the same way that I would catch myself mindlessly flicking open and closed the plastic Airpods case, I found myself just mindlessly caressing the case because it feels so smooth. It makes for a great fidget toy, at least until you open it. 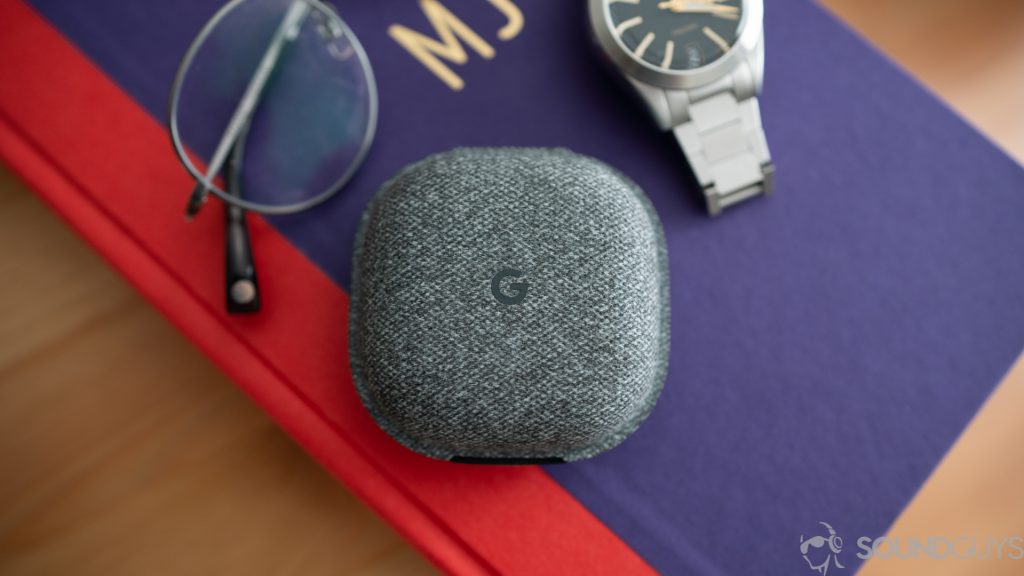 The case is made of a nice fabric that feels great and fits nicely in the pocket.

In the case is where you’ll find the headphones, all wrapped up nicely around a lip holds it in place. Unwrapping them in order to use them was super easy, but placing them back was always a hassle and I’m surprised this is the method Google chose to go with. If you need to put an instruction sticker on your product explaining how to correctly place them back in the case, maybe you should rethink your design. This was by far the most frustrating thing about the Pixel Buds and more than once I found that I messed up putting them back in the case, resulting in one of two things. Either the case wouldn’t close properly and I would need to take them out to try again, or the case would close fine but the earbuds weren’t perfectly in place which meant the ‘buds would never disconnect my phone. In the case are three small LED lights to show you how much battery life is left as well as a Bluetooth pairing button, and that’s it. To get these to fit properly, you have to run the wire through the earbud into a small loop.

This brings us to the actual earbuds themselves which I have mixed feelings about. On one hand, just like the case, I love the build materials Google chose to go with. The earbuds are made of a smooth plastic that isn’t fingerprint-prone at all, and even after a month of everyday usage they still look crispy clean. I’m also a big fan of the braided fabric cable connecting the two earbuds which don’t tangle or look cheap. That same cable loops through the earbuds and can be adjusted to fit your ear better, but that can get annoying for two reasons. Not only is it seriously uncomfortable after a while, but the process of taking them out of the case is basically impossible to do without pulling on said cables to get the earbuds out. But doing that resets the position of the loop, so you’re basically stuck re-adjusting the loop to fit your ears at least every other use.

What’s up with connectivity? 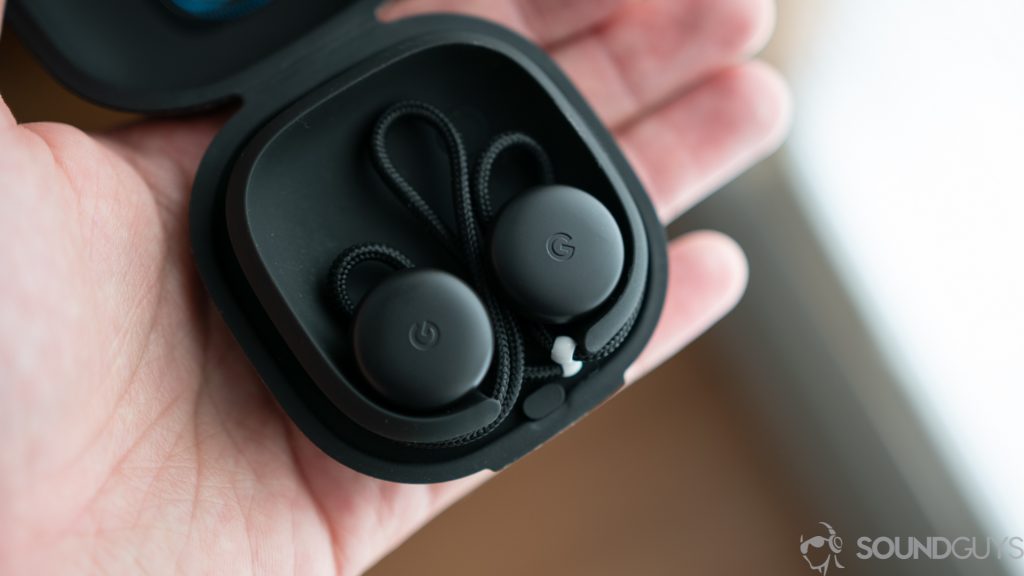 The Google Pixel Buds need to be wrapped up perfectly in the case.

The one thing that the Pixel Buds had to nail was a great connection. The AirPods sound terrible, fit terribly, and look ridiculous, but connecting to them (and staying connected) is basically perfect. Luckily, the Pixel Buds live up to that in my experience somewhat. The initial setup process requires you to hold down the button in the case for three seconds, which led to a small card popping up on my Pixel 3 that made the setup process seamless and super simple. Unfortunately, you’re going to need Android 5.0 or higher on your device for that to occur. For everything else, including iPhones, you just have to go through the regular Bluetooth pairing process.

Another problem is switching between devices, which isn’t easy at all, and is basically only possible by going into Bluetooth settings each time. If you’re looking to seamlessly transition from your phone while commuting to your laptop at your desk, these might not be for you. The Google Pixel Buds randomly decide to pick one device as the main one, and auto-connect as soon as I turn Bluetooth on—but whether that’s my laptop, iPad, or Pixel phone it’s like playing Russian roulette.

Luckily, I basically only use them with my phone and in that respect, the connection is seamless. They auto-connect when I take them out of the case, and automatically disconnect when I put them back in (assuming I placed them in the case properly). Not once did I experience a skip in the music. On the flipside, there is definitely a slight lag when watching YouTube videos so the audio doesn’t perfectly sync up which is a huge miss that annoys me every time I watch a video. The charging case has a small button for Bluetooth pairing, a spot for the earbuds, and three small LED lights for the battery.

One thing you might notice when looking at the Pixel Buds is their lack of buttons, and that’s because everything is controlled via swipe gestures on the right earbud that also work perfectly. A single tap pauses or plays music, while swiping left or right adjusts the volume. Double tapping can be configured to either skip to the next track or have the Google Assistant read your most recent notifications. You can also reply to these notifications as well just by tap and holding the earbud which is useful in a pinch when your phone is out of reach.

How well does the real-time translation work?

Of course, the big feature that Google was pushing with these was instant translation when you use them with the Google Translate app. While I did use it with Spanish-speaking relatives to mild success, I can’t picture a use case where this is preferable to just using the Google Translate app that you need installed on your phone anyway.

When using the feature, it was tough to keep up with the conversation because it’s a lot like having auditory hallucinations. Additionally, it seems quite rude to have earbuds in while you’re talking to someone else, and I’m not convinced this feature is ready for primetime without some rethinking. They charge via USB-C which is good news for anyone looking to only charge their gear with a single cable.

On the bright side, the charging case does give you a few extra charges that will total to 24 hours of playback and also has quick charging. Just ten minutes in the case will get you another hour of listening time. They also charge via USB-C which is great, seeing as I have finally unlocked the one-cable achievement with all of my devices.

How do the Google Pixel Buds sound? The frequency response of the Google Pixel Buds has a slight dip in the mids and just barely emphasizes some of the bass. The Pixel Buds are not great at isolating outside noise at all.

Sound quality on the Pixel Buds is passable at best, and I’d say that’s mainly because of the lack of a proper seal when wearing these. They block almost no outside sound which is good if you need to hear what the conductor on the train is saying, but bad if you want to truly enjoy your music.

They also don’t get loud, and I found myself needing to constantly pause what I was listening to whenever the train I was waiting for approached the station as it would completely drown out my music or whatever podcast I was listening to. The earbuds themselves have promise, as you can see from the frequency response in our testing there is a slight bump in the low end.

The problem is that because of the loose fit of the Pixel Buds, you can’t appreciate that unless you push them deeper in your ears. Due to the slight underemphasis of the mids, vocals really pop which is great when listening to podcasts. But I found that this made the background instruments of the song Nadie Se Meta by Ala Jasa sound almost flat and lacking in detail. Thankfully, that wasn’t a problem with the highs and the shakes and higher synth elements of the song Mirage by Toro y Moi played through nicely. The Google Pixel Buds need to be wrapped up perfectly in the case. 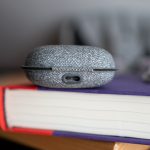 They charge via USB-C which is good news for anyone looking to only charge their gear with a single cable. The case is made of a nice fabric that feels great and fits nicely in the pocket. The charging case has a small button for Bluetooth pairing, a spot for the earbuds, and three small LED lights for the battery. To get these to fit properly, you have to run the wire through the earbud into a small loop. Even after a few weeks of use the plastic build of the earbuds still looks brand new.

If you can’t tell, the Pixel Buds are a giant swing and a miss for Google. As someone who talked myself into buying them despite the bad reviews, I can safely say that these are not worth the asking price. They’re a half-baked product wrapped in premium materials that I would’ve already returned had I not missed my return window date. Don’t get me wrong: they’re not a bad pair of earbuds, they’re just overpriced. There are a few key issues with Bluetooth that Google had to fix, and the Pixel Buds don’t solve any of them.

Considering the price and the company that makes them, I was hoping for something more in line with the brand. Instead, I got a pair of decent sounding ‘buds, with an annoying A/V lag, a sub-par battery life, and basically no isolation. Sure, having access to the Google Assistant is cool and useful, but the Assistant shouldn’t be the main selling point. It can make a good pair of headphones great, but if the headphones are bad to begin with the Assistant isn’t going to change anything.