Is it time to be out with the old and in with the new?

The Bose QuietComfort 35 II is a bit older than the Sennheiser PXC 550-II, but Bose’s old dog can keep up with Sennheiser’s new pup. Shopping for audio products can be overwhelming. We want you to spend less time researching, and more time enjoying your music. Today, we’re comparing two popular noise cancelling headphones from reputable brands, to see which is best for your needs.

Editor’s note: this versus article was updated on November 7, 2021, to address the Bose QuietComfort 45 as an alternative to each headset, and to update the Bose QC 35 II frequency response chart.

Is the Bose QuietComfort 35 II more comfortable than the Sennheiser PXC 550-II?

You can connect the PXC 550-II to two devices at once, and it remembers eight connections for quick re-connecting.

Bespectacled listeners are bound to enjoy either headset, though Bose made its name on comfort, and the QuietComfort 35 II edges out the Sennheiser PXC 550-II in that regard. Each headset has an over-ear design, but the QC 35 II gives you greater clearance for large ears compared to the Sennheiser PXC 550-II. Bose and Sennheiser’s headphones both include removable memory foam ear pads, which makes them easy to clean or replace.

Both headsets are predominantly plastic, with ear cups that rotate flat and fold towards their respective headbands. The QC 35 II relies strictly on tactile buttons to control the headset, while Sennheiser integrates buttons and a touchpad on its headphones. The PXC 550-II is free of a power button because rotating the right ear cup powers the headphones on and off.

With the Sennheiser PXC 550-II, you can toggle between three noise cancelling settings: Mode 1, Mode 2, and off. In the Sennheiser Smart Control app, you can select which kind of ANC you want for Mode 1 (adaptive ANC or adaptive, anti-wind ANC). You can also toggle effects like smart pause, which automatically detects when the headphones are removed and pauses playback. The app also features call enhancement and smart assistant preference settings. Only Sennheiser’s Smart Control app gives you the option to make small adjustments to the sound. The Bose Connect app lacks an in-app EQ and equalizer presets altogether.

The Bose Connect app lets you find your headphones, select your preferred voice assistant, and set up the action button. You can only assign one action to the Action button: either accessing your assistant, or cycling through ANC modes, but not both. If your smartphone has a native Google Assistant, you can access it via the multi-function button on the right ear cup. You can toggle between three levels of ANC: low, high, and off.

The Bose Connect app has a more pleasing UI than the Sennheiser Smart Control app.

Bose’s app also lets you connect two headphones to one device and share audio. This is something iPhones and some Samsung devices already support, but other users will enjoy the streamlined way to share music.

What Bluetooth codecs do you get with the Sennheiser PXC 550-II, Bose QuietComfort 35 II?

Anyone who alternates between iOS and Android devices will get more mileage with the Sennheiser PXC 550-II, because it supports a handful of high-quality Bluetooth codecs: AAC, aptX, and aptX Low Latency. All devices can stream high-quality audio to the Sennheiser headphones, which is in great contrast with the Bose QuietComfort 35 II, which only supports AAC and SBC. As is well documented, AAC performs inconsistently across Android devices, because the operating system struggles to encode the codec properly.

The Bose QuietComfort 35 II uses Bluetooth 4.1, which is a bit dated compared to the PXC 550-II’s Bluetooth 5.0. The main difference between these two versions is power efficiency, which the Sennheiser’s more impressive battery life demonstrates. Both headsets support multipoint connectivity, which is great for keeping an ear on incoming calls and notifications while watching TV.

Rotating the ear cup turns the headset on and off, as indicated by the red (off) circle on the right yoke’s hinge.

The Sennheiser PXC 550-II lasts 21 hours, 58 minutes on a single charge with ANC on its highest setting, which outperforms the Bose QuietComfort 35 II battery measurement of 15 hours, 46 minutes.

See also: Where do batteries come from and where do they go?

Does Bose or Sennheiser have better noise cancelling?

Both headsets do a very good job of attenuating background noise, but neither are at the very top of their class compared to the Apple AirPods Max, or Sony WH-1000XM4.

The Bose QuietComfort 35 II is an excellent set of noise canceling headphones.

The HD 450BT isolation is quite good, and noise cancelling performance is okay.

The Bose QuietComfort 35 II remains one of the best noise cancelling headsets around, years after its release date. Sennheiser’s ANC isn’t quite as good in the bass region, but both are effective and can protect you from noise-induced hearing loss.

You may have noticed that our charts feature different backgrounds, that’s because the ANC and frequency response charts with dark backgrounds were made with our new Bruel & Kjaer 5128 test fixture (and the appropriate support equipment). The Sennheiser PXC 550-II still needs to be retested with this updated setup. We’ll update the charts to this comparison once we’ve made the improved sound quality measurements and ANC performance plots.

Thank you for bearing with us, and we hope to see you again once we’ve sorted everything out.

Both headsets have excellent sound quality

If you came for good sound quality, you’ll get it from either headset. 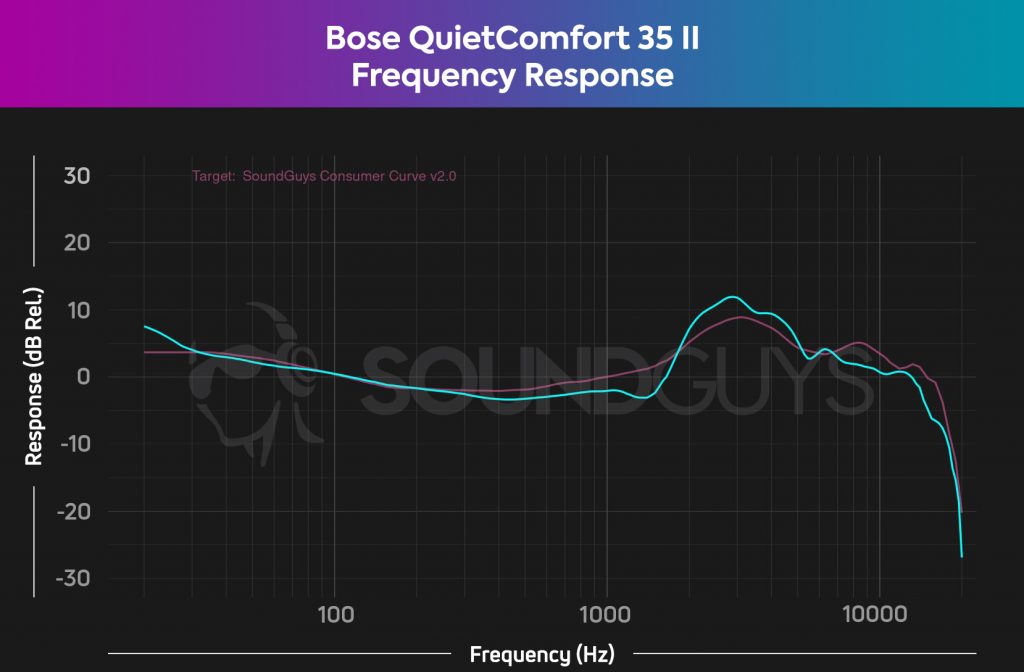 Sennheiser and Bose’s headphones reproduce neutral-leaning frequency responses, but per our objective measurements, the Sennheiser PXC 550-II is a touch more accurate, and reproduces all notes at a more similar loudness than the Bose headset. This is visualized in the frequency charts: Bose’s headset amplifies sub-bass notes to an audible degree, while Sennheiser’s sound signature toes the line of platonic ideal (the dotted red line) until 1kHz.

Again, both headsets do a great job reproducing music as the artists and audio engineers intended, so there’s no wrong choice. Plus, you can equalize either sound profile from your smartphone’s integrated EQ module (most modern phones have this). These neutral sound signatures are great for tinkerers, and make it easy to adjust the output of certain frequencies without introducing distortion.

Should you use the Bose QuietComfort 35 II or Sennheiser PXC 550-II for phone calls?

The microphone systems have very different frequency responses: Bose applies a high-pass filter to its microphone, so that low frequencies are quieter than expected. This may sound strange but it’s strategic: manufacturers do this to reduce the proximity effect, which is when bass notes are amplified too much as a speaker gets close to the microphone.

Sennheiser applies a less intense high-pass filter to the PXC 550-II, which effectively transmits accurate audio without flirting with the proximity effect. Both headsets are well equipped with excellent mics to handle your personal and professional calls.

Give each demo a listen, and vote on your favorite microphone:

Bose QuietComfort 35 II vs Sennheiser PXC 550-II: Which headphones should you buy?

The Bose QuietComfort 35 II remains competitive, thanks to software updates through the proprietary app.

You can’t go wrong with either headset, but there are a few things that may sway you toward one over the other. Operating system-agnostic listeners will find the Sennheiser PXC 550-II to be a better tool, because of the vast high-quality Bluetooth codec support. However, if you want the most comfortable headphones and better ANC, the Bose QuietComfort 35 II makes more sense.

Sennheiser PXC 550-II
All prices listed in USD unless otherwise specified. Prices may change over time, and vary by region. Unfortunately, we cannot list Amazon prices on the site, as they vary greatly by currency.

Another thing to consider: price. Typically both headsets retail for around $300 USD, but prices are constantly in flux. When we originally reviewed the Sennheiser PXC 550-II noise cancelling headphones, it was available for just shy of $200 USD, and that remains true as of November 8, 2021. The Bose QuietComfort 35 II currently retails for about the same price, depending on your preferred vendor. Be sure to consider the costs and benefits of where you buy you headphones from; some vendors have great customer service and warranty coverage while others don’t.

What should you get instead of Sennheiser and Bose’s headphones?

The Sony WH-1000XM4 supports Bluetooth multipoint, and has advanced ANC.

The Sony WH-1000XM4 is also great for listeners willing to up their budgets. It’s also on sale for $299 USD, which is a big price drop for a recent flagship. The sound signature isn’t nearly as neutral-leaning as either headset discussed today, but you can take granular control of the EQ in Sony’s Headphones Connect app.

Sony’s headset has much better noise cancelling performance than the Bose QC 35 II and Sennheiser PXC 550-II, and more software features too. Even simple hardware comforts like a USB-C port is built into the Sony headset. It’s also much cheaper than the infamous AirPods Max but offers a similarly comprehensive feature set.

The ear cups are magnetically attached and can easily pop off to be replaced.

Anyone deep in the Apple ecosystem will appreciate the Apple AirPods Max. This headset has the most effective active noise cancelling performance we’ve ever tested here at SoundGuys, and it also sounds fantastic. What’s more, when paired to an iPhone or other Apple device, it offers an impressive set of features like Spatial Audio and Bluetooth multipoint functionality. It doesn’t have an easy option for wired listening, and its carrying case is pretty useless, but otherwise the AirPods Max is a great pair of headphones if you can foot the $549 bill.

Another great noise cancelling headset is the Shure AONIC 50. If you want some of the best wireless audio quality, with vast Bluetooth codec support and USB-C passthrough audio functionality, get these comfortable headphones. Then again, maybe you want to stick within Bose’s realm. If that’s the case, take a closer look at how the Bose QuietComfort 35 II compares to the Bose QuietComfort 45. The QC 45 has some of the best ANC around, but its default frequency response leaves a lot to be desired.

Next: The best Bose headphones