By Aftershokz
Check Price
These are one of the best that Aftershokz has to offer, and as the company that basically dominates this category that's saying something.
9.0

By Aftershokz
Check Price
The Aftershokz Air are another good option from the company, even though it has slightly less impressive specs than the Aeropex.
8.6

By Aftershokz
Check Price
They're not perfect, but the Aftershokz Titanium are still worth checking out.
8.8

By Aftershokz
Check Price
If you're a swimmer, these are the way to go thanks to full waterproofing and 4GB of onboard storage.
8.0

By Vidonn
Check Price
The only pair that made this list that wasn't from Aftershokz are the Vidonn F1 and even at the low price they're a solid bang for your buck pick.

It might seem like true wireless earbuds are the only innovation to come to headphones in the last few years, but that isn’t the case. There is another type that is much less talked about, and that’s bone conduction headphones. While they’re not for everyone, they do fill a niche and may be exactly what some people are looking for. If that someone is you, then you’ve come to the right place. These are the best bone conduction headphones you can get.

Editor’s note: This article was updated on August 14, 2020, to address a question in the FAQ regarding how music sounds through bone conduction headphones.

Don’t overthink it, just get the Aftershokz Aeropex

If you’ve been browsing your local electronics store, you’ve likely seen some headphones from Aftershokz. The company has been pumping out multiple versions of bone conduction headphones for years, and the best they have to offer are the Aftershokz Aeropex. These have a similar design to some of the previous models, so if you’ve ever used a pair of Aftershokz headphones before you’ll know what to expect. 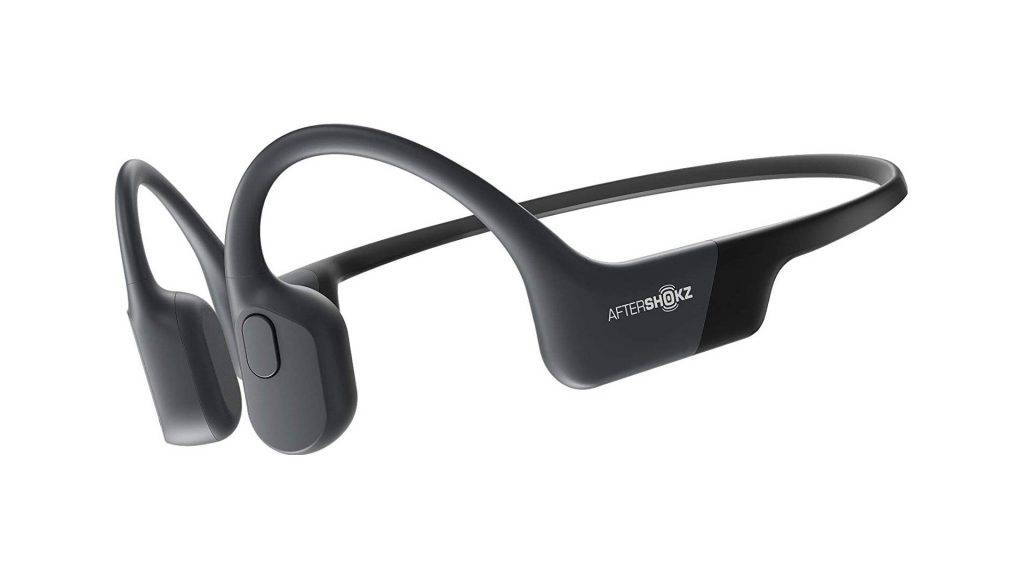 The plastic construction makes for a flexible pair of headphones that should hold up to some heavy usage, especially since these are IP67 rated against water and sweat damage. You’ll also get about eight hours of constant playback, which isn’t too bad considering most people will probably be using these for exercise. These also charge via a magnetic charging cradle so there are no rogue ports. Plus, Aftershokz made these with an emphasis on comfort that has these weighing in at just 26g. On top of that, these are rocking Bluetooth 5.0, and while there is a new version promised to be coming out sometime in the future, it hasn’t found its way into any products yet.

Before throwing your hard-earned cash at something, it’s always good to be even a little informed about what you’re buying. So let’s go over some basic things you should know about bone conduction headphones.

How does bone conduction work? 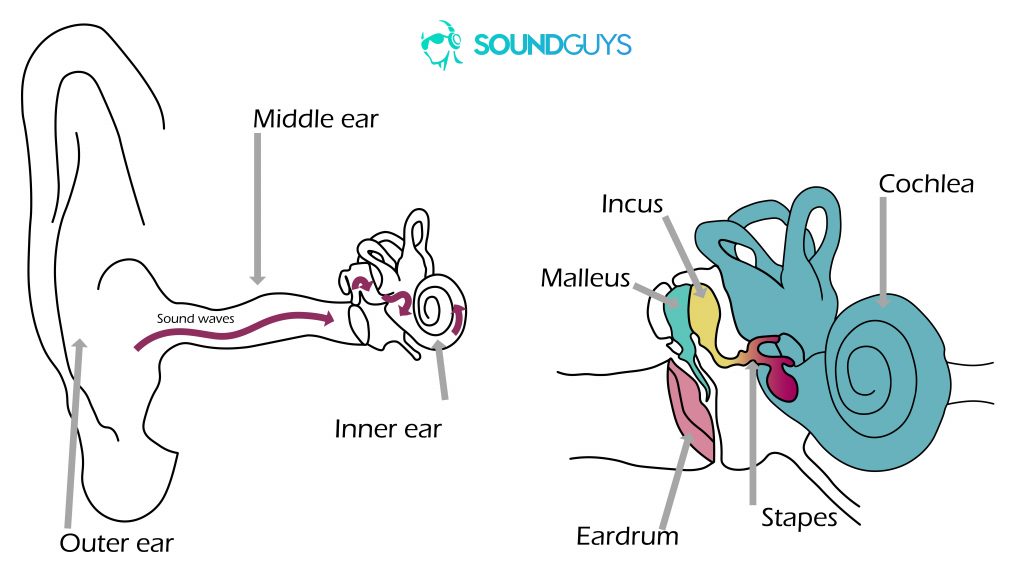 You usually hear by sound waves getting corralled and sent to your inner ear via the outer ear. Bone conduction bypasses the outer ear and ear canal altogether.

Maybe you haven’t stopped to think about it recently, but the fact that we can perceive slight changes in air pressure as sound is a pretty amazing feat. The combination of classical physics and biology meet in an extraordinary way every day right inside your head. Most people are probably familiar with sound waves just being a change in the pressure of air molecules. Once that reaches your ears, they’re reflected into your ear canal thanks to your external ear (pinna). They travel until they reach your eardrum, which then vibrates in response to the air pressure. Those vibrations are passed through to your middle ear which includes the famous malleus, incus, and stapes bones. (Fun fact: those bones evolved from jaw bones). 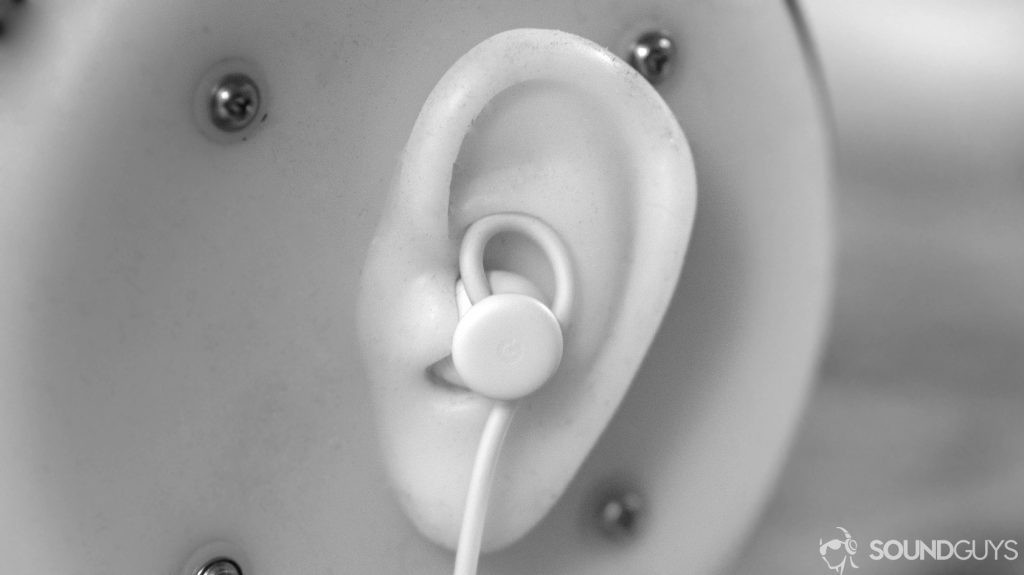 Mashing a rubber cord into your outer ear isn’t exactly the most comfortable means of holding earbuds in.

Those three bones amplify and direct the sound into the cochlea of your inner ear to keep the wave going. For the purposes of this article, we can stop here. Because it is those three middle ear bones that make conduction possible. The headphones you’ll find on this list work by bypassing the eardrum and sending vibrations straight through to the malleus, incus, and stapes bones. From there, the sound waves can just carry on as normal. For this reason, bone conduction headphones don’t have giant ear cups that you wear over your ears, because they don’t need to send sound through your ears. Instead, these rest slightly in front of your ears and send vibrations through the bone. This allows the middle ear bones to register the vibrations without blocking your actual ears, leaving them open to hear what’s going on around you.

Are bone conduction headphones any good?

This depends on the use case. If you’re an audiophile looking for your next pristine pair of headphones, then these aren’t for you. They’re not designed for high fidelity playback; bone conduction headphones are designed to keep your ears free to hear what’s going on around you. And since a big part of how good a pair of headphones sound is how well do they isolate, these are obviously not going to sound great seeing as they don’t isolate at all. For that, you might something like the Plantronics BackBeat Fit 3200 true wireless pictured below. 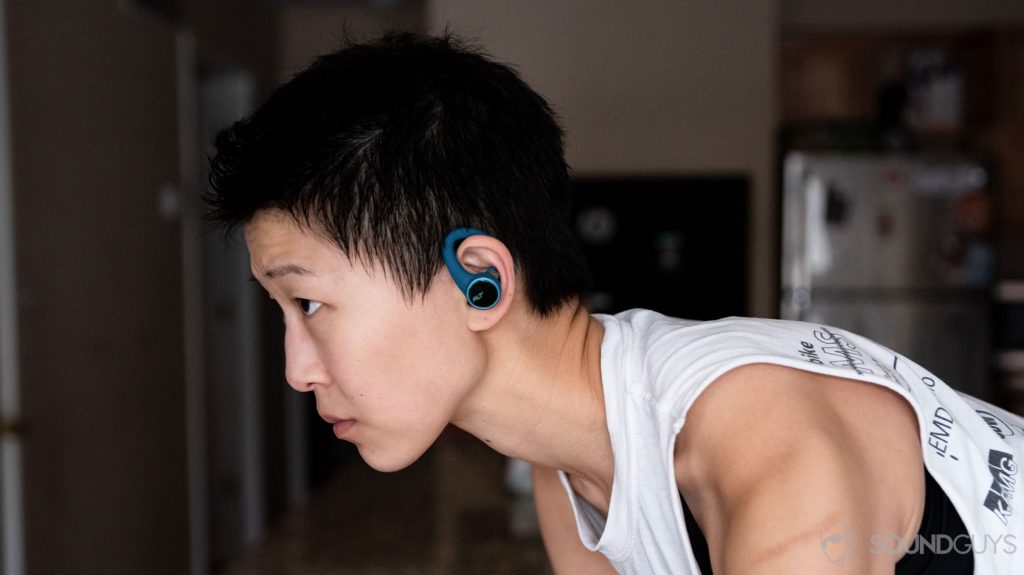 That said, being able to have your ears free and hear what’s going on around you is the whole point of using bone conduction headphones. For runners or cyclists that need to be aware of their surroundings while out and about, bone conduction headphones are a useful way to still enjoy music or podcasts without ever losing awareness of what’s going on around you. 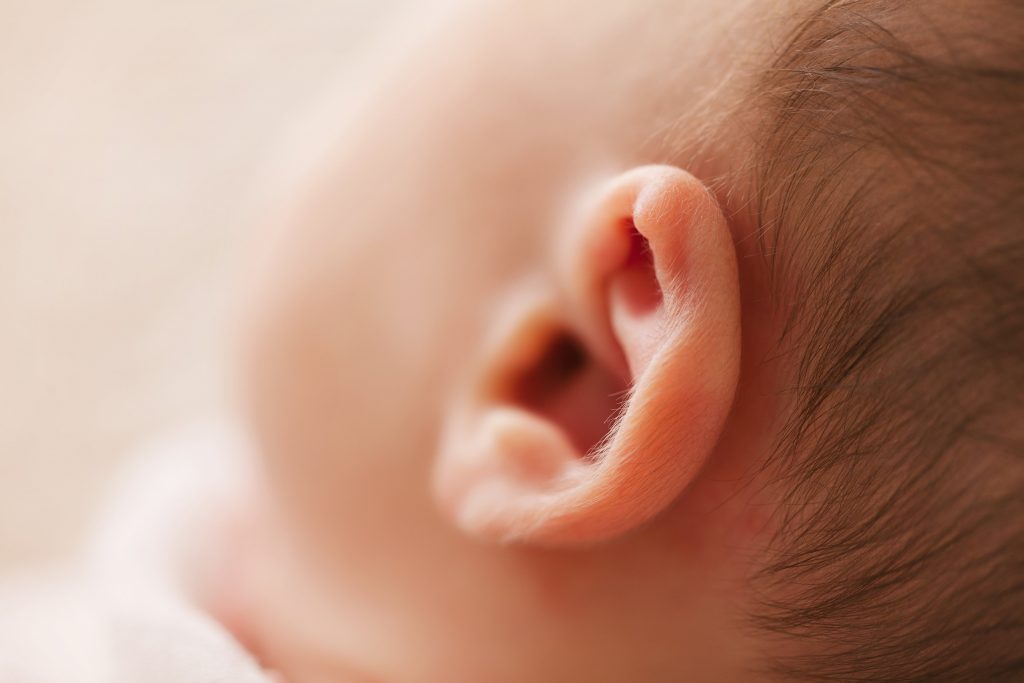 Human hearing is a sensitive topic.

Absolutely. Just because these headphones bypass the eardrum doesn’t mean they can’t cause hearing loss. There are a few different types of hearing loss that you can read all about in our full explainer, but the most common type of hearing loss is called Sensorineural Hearing Loss (SNHL). This is the loss of sensitivity to hearing higher frequencies and occurs because of damage to tiny hairs inside your ears called stereocilia. These are located in the inner ear and along nerve pathways and can still be worn out by constant use or loud sounds just as if you were wearing regular headphones.

What are the pros and cons of bone conduction headphones?

Like anything else in life, there are pros and cons to using bone conduction headphones. Lily did a great job explaining in detail the case for and against these types of headphones, so we’ll go with a shortened version here. 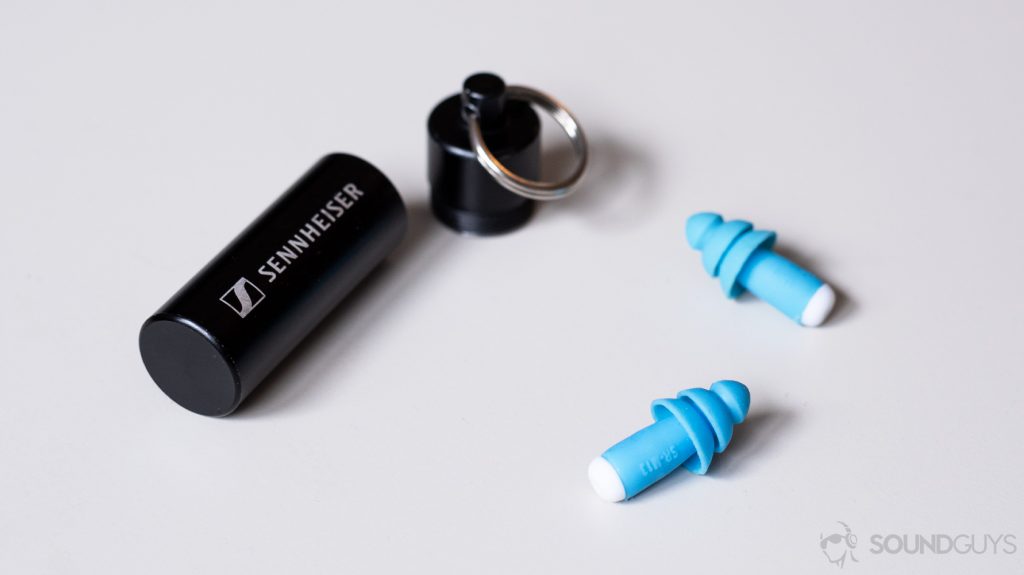 Earplugs are an effective form of hearing loss prevention and a must-have for concert-goers.

Another solid option is the Aftershokz Air

It might seem like Aftershokz has a chokehold on the entire bone conduction market, and that’s because it kind of does. Audio is already a pretty niche category – albeit a growing one, and bone conduction headphones are an even smaller sliver of that. The Aftershokz Air headphones aren’t as impressive spec-wise as the previously mentioned Aeropex, but they should still get the job done.

These are also sweatproof with an IP55 water-resistant build, but they’re a little heavier at 30g. You’ll get Bluetooth 4.2 and a solid six-hour battery life, though it’s worth mentioning that these unfortunately charge via microUSB which is a bit of bummer.

Taking a step down from the Air, you come to the Aftershokz Titanium bone conduction headphones. These are very similar to the Air except with a few minor differences when it come to specifications. These also have an IP55 rating to protect against sweat so athletes don’t need to worry too much about damaging them thankfully. These will also get your roughly six hours of constant playback, but they’re rocking Bluetooth 4.1. They also don’t have as snug a fit as the other options making it a little more of a hassle to keep them where they need to be. Furthermore, they weigh in at 36g which is still super light, just not as light as the newer models.

If you’re a swimmer, then go with the Aftershokz Xtrainerz

One of the benefits of not using traditional earbud drivers is that you can make a pair of headphones that are completely waterproof. Case in point, the Aftershokz Xtrainerz. These have an IP68 rating that makes completely waterproof so you can submerge them no problem. This is obviously great for swimmers, so if you wanted some music while doing your laps then problem solved. 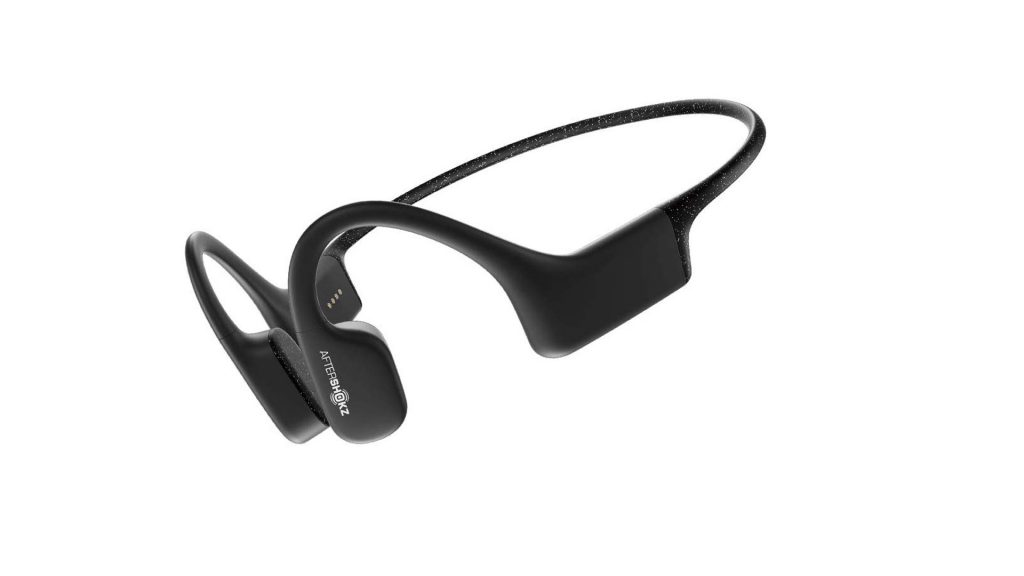 Of course, you probably don’t go swimming with your phone and even the best Bluetooth headphones will have trouble transmitting your music while you’re at the other side of an Olympic-sized pool, so instead these have 4GB of internal storage for you to load up your own playlists. You’ll get a solid eight hours of constant playback out of these and they even fit underneath swimming caps.

Want something that won’t break the bank? Then check out the Vidonn F1

Vidonn definitely isn’t a household name, but the Vidonn F1 are still a fairly impressive product that offers a lot of what the Aftershokz top models offer at a more affordable price. These share a similarly sleek design as well as an IP55 rating to protect against sweat and light rain. On top of that, these are made of ABS+ titanium alloy making them a little more durable than the plastic you’ll find on other models. You’ll also get six hours of battery life here which isn’t too impressive, but on the bright side, these do have Bluetooth 5.0 which is surprising considering the low price point. If you’re not looking to spend too much money on a pair of bone conduction headphones but still want to give them a try, these are worth checking out.

Next: What are bone conduction headphones and how do they work?

What does music sound like when listening through bone conduction headphones?

Can bone conduction headphones cause nausea or headaches?

If you've never used bone conduction headphones, you may experience some slight discomfort during your first use. However, just like with any pair of headphones or earbuds, you shouldn't experience any nausea or headaches if you're careful about not raising your volume too much.

What makes bone conduction headphones great for working out?

Most of the time, bone conduction headphones have IP ratings that can withstand, at minimum, the sweat that you develop during workouts. Also, if you're someone who likes to run at night, or generally just be aware of your surroundings, bone conduction headphones keep your ears free to hear the world around you, while you jam out to your playlist.

I've got a small head and wear glasses. Can bone conducive headphones work for me?

Yes, bone conduction headphones can still work for you because they make contact on the cheekbone, right below where the frames of your glasses rest. That said, depending on how small or stout your ears are, you may have a difficult time achieving a secure fit behind your ear with glasses and the headphones. This also depends on how thick your frames are, because wireframes will be less obtrusive than thick plastic ones.