If you like UE but felt like its previous offerings weren't loud enough to power your parties, then the HYPERBOOM is perfect for you. Sure it's expensive, but it fills a niche that UE couldn't previously fill. 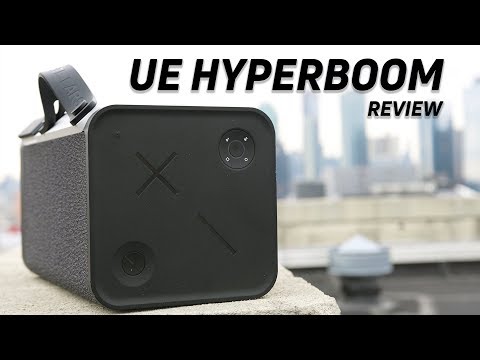 If you’re headed out to a beach or the park there are a few well-known speakers that you might reach for, and one of the companies with plenty of success in this field is Ultimate Ears (UE). It’s the company behind the UE BOOM, Roll, and WONDERBOOM series, all of which are go-to speakers for many. The UE HYPERBOOM makes loud sound portable, or more so than before. This is a giant UE speaker stretched to its limits, but does that make it any good?

Editor’s note: this UE HYPERBOOM review was updated on June 2, 2021, to include more product information.

Who should get the UE HYPERBOOM? The first thing you should know is that this thing is big. If you’ve had UE BOOM speakers in the past and think you know what it’s like to use a UE speaker, just throw that knowledge out the window. For the first time, UE went with a square shape for its speaker instead of a cylinder, and it works. You still get the giant + and – signs that the company is known for, but this time around the symbols are touch-capacitive. You’re won’t be able to toss the HYPERBOOM into your bag for a hike, but it’s still pretty light considering its size. Instead, this is the kind of speaker you want for a backyard or beach party.

The speaker is made of a tough plastic that is IPX4 splash and dust-resistant. I can see this speaker living poolside in the summer: not having to worry about whether it’s going to rain or get splashed is a major plus. That said, try not to submerge the speaker as doing so will fry the internals. Along the spine is a built-in rubber strap that I really like, because it makes the speaker much easier to carry from place to place. Plus, when you’re not using it you can just make it go flat against the speaker which is convenient. Under the strap, you’ll find the waterproof flap for all of the ports, one of which I’ll get into here because it really changed how I view this speaker. In classic UE style, the HYPERBOOM is rocking the giant + and – sign volume controls which are touch-sensitive.

UE included an optical input, which is a genius move. While this speaker is obviously going to get some use at summer parties be it at the beach or at the park, the optical input means it can benefit homebodies. Even though I occasionally bring a speaker to a party, most of the time I’m just sitting in my apartment relaxing. The idea that I can use this large, loud, and fairly durable speaker in my daily life and then pick it up and bring it with me to my next family barbecue is very appealing. If you’re a home theater nut, this obviously isn’t going to cut it for you. However, I can see this being useful for people who want a quick upgrade to the sound on their TV and to kill two birds with one stone.

Another really cool feature that the UE HYPERBOOM has is “One-Touch Music Control,” which automatically plays your favorite playlist when you long-press the play/pause button. This feature won’t change your life but it’s very convenient and feels futuristic.

How do you connect to it? The speaker is IPX4 rated, but under the rubber flap are all of the inputs.

Even though this does have an optical input, this speaker was clearly designed for your next party. So much so, that UE engineered a solution to a party foul. You know when someone is connected via Bluetooth and playing music, and then someone else has to connect their phone? You either have to hand off the aux or you need to re-pair another phone to the speaker, both instances result in a gap of no music. To combat this, UE included two Bluetooth inputs. One person can actively play DJ, while a second person can pair to the speaker and queue up their song without interrupting the flow of the party.

Besides the two Bluetooth inputs, you also get an optical input, a USB-A output for charging your devices, and a 3.5mm input. Switching between all of the inputs is simple, as there’s a dedicated button for all four on top of the speaker. One thing that’s worth noting is that the 3.5mm and optical outputs are hidden under a rubber flap along the back of the speaker, so if you’re going to be using those then just keep in mind that you’re breaking the IPX4 seal to use them so avoid water if possible. While the speaker isn’t exactly portable, the built-in handle does help you carry it around.

The wireless range is about 48 meters, and it stays connected well. I have no problems listening to music in my apartment, even with a few walls in the way. Lag is also non-existent when you stream a video over Bluetooth, which is surprising as there are no high-quality codecs to speak of here.

You can control every aspect of the speaker entirely from the BOOM app. Plus, you get a few extra features like EQ and the ability to connect multiple UE speakers together via the PartyUp feature.

How good is the battery life of the UE HYPERBOOM?

UE claims that the HYPERBOOM will give you about 24 hours of constant playback on 50% volume, and just around three full hours of playback on 100% volume. In our testing, we recorded 22 hours, 14 minutes of constant playback. If you’ve ever owned a UE speaker before, then the process of checking the battery life on the HYPERBOOM will be familiar to you. To check battery life, all you have to do is tap the + and – icons simultaneously.

How does the UE HYPERBOOM sound? The bass (pink) has a slight emphasis that can seem louder than some of the mids and highs (green and blue).

When I spoke with UE representatives about the speaker, they noted its sound profile was intended to sound bass-heavy from the very start, but when the prototypes started coming in, engineers found that the bass was too strong and they toned it down. When testing the frequency response of this speaker, I placed it in the middle of a large room. Normally, if you were to get this speaker and place it in the corner then the bass would be exaggerated as it bounces off the walls, but your experience should be somewhat similar to what I tested anyway thanks to something that UE calls Adaptive EQ. A tiny microphone on top of the speaker hears and adjusts the EQ of the speaker in real-time.

As you can see from the frequency response chart, bass notes receive a good amount of amplification but sub-bass notes are attenuated (a common problem with portable speakers). This makes the bassline in the song ???? by EDEN really rumble its way through the song in a way that remains easy to hear even when outdoors. The UE HYPERBOOM is covered in a nice IPX4 water-resistant fabric.

Vocals came through well enough and the two 25mm tweeters did a good job at handling the highs too. Hi-hats and cymbals didn’t come across super loud and clear. You can hear in You Only Live Once by The Strokes when the shakes throughout the chorus seem kind of distant and muted, but they also never became harsh which is good. You might not get the same level of clarity you’re used to from something like a soundbar, but even at high volumes, there was no distortion which you can’t say for all Bluetooth speakers that are designed for outdoor use. Of course, if you want to tweak the sound of your music more you can always just go into the app and tweak the EQ for yourself.

Should you buy the UE HYPERBOOM?

The UE HYPERBOOM is a great speaker that fills a niche perfectly, but that comes at a cost of $399 USD. Whether or not you should buy it really depends on whether or not you have a few hundred dollars lying around. While I can’t see too many people dropping the money to pick this up (especially when you can get multiple smaller speakers for that price), it’s a great speaker.

UE HYPERBOOM
All prices listed in USD unless otherwise specified. Prices may change over time, and vary by region. Unfortunately, we cannot list Amazon prices on the site, as they vary greatly by currency.

The UE HYPERBOOM fills a void in the UE lineup, and it does it really well. It solves some of the most annoying party problems, and its tough IPX4 build means you don’t have to baby it. Not to mention that it sounds really good and the Adaptive EQ is a clever solution to not knowing where someone is going to place the speaker in space. Plus, the addition of an optical input means you can use this speaker every day, even when you’re not throwing Project X-style parties.

What should you get instead of the UE HYPERBOOM?

If you wanted a super portable speaker for going out on a boat or to the beach, you have the WONDERBOOM 2. If you’re living in a dorm or maybe just want a better-sounding speaker for your next tropical getaway, you have the UE BOOM 3. For an even better bass response, there’s the UE MEGABOOM. To leave the Ultimate Ears realm, check out the Sony SRS-XB32.

The UE Hyperboom should not be used as a guitar or microphone amp. Also, the aux and 3.5mm port are one and the same on this speaker.

If you're using the UE Hyperboom as a home speaker, you don't need to worry about powering it off every time you leave the house. The Hyperboom automatically shuts off after 15 minutes of inactivity. Unfortunately, when you come home, you will have to either manually turn on the speaker or press the play button to access One-Touch Music Control.