Fine IPX4 earbuds that don’t stick out from the crowd.

The IPX4 sweat-resistant build of the Phiaton Curve BT 120 NC can withstand unforeseen showers and demanding workouts alike. If you don’t need the best noise cancelling earbuds but want something better than plain old passive isolation, this $79 option includes enough features to warrant its consideration.

Maybe you’ve given up on the search for awesome USB-C earbuds, or maybe you just want an affordable pair of wireless noise cancelling ‘buds, no matter what’s brought you here, the Phiaton Curve BT 120 NC is an affordable option likely to please a wide range of consumers.

Editor’s note: this review was updated on April 9, 2019, to reflect updated scoring methods and include isolation information. 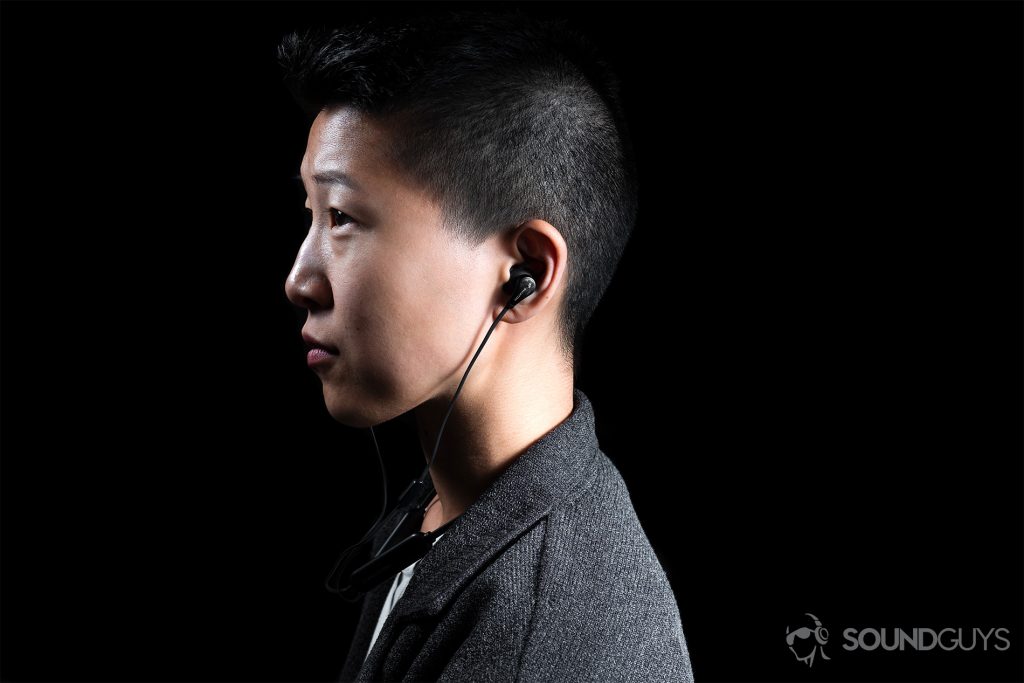 The price and feature set make these a great set of affordable ANC earbuds.

These earbuds are best-suited for commuters and general consumers. Those who frequently take the train to work will benefit from the noise cancelling capabilities of the earbuds. What’s more, the compact form fits into even the most overstuffed backpacks; worst case scenario, you can just wear them. The Curve includes other user-friendly features too like its IPX4 water-resistance and ergonomic RightFit+ ear wings that promote a comfortable all-day fit.

How is the Phiaton Curve BT 120 NC built? The Phiaton Curve BT 120 NC includes an array of ear and wing tips, a micro-USB cable, cable management piece, and the neckband earbuds.

Each plastic earbud housing is connected by a tenuous cable joining the earbuds to the Memory Flex, non-slip neckband, which vibrates to notify listeners of incoming calls or when walking out of the Bluetooth connection radius. Although plastic and silicone components won’t garner compliments about the Phiaton Curve BT 120 NC, the benefit is the lightweight form.

Comfort extends beyond the neckband, though, because the proprietary RightFit+ wing tips properly distribute weight along the outer ear. In turn, this reduces hotspot irritation. Plus, the name is similar to Bose’s StayHear+ ear tips, but make no mistake: Bose’s provide greater stability for strenuous exercise. Additionally, the cable management solution is meager at best. Instead, Phiaton should have gone with shorter cables.

Inset on the left end cap’s interior rests the playback and call controls. While the buttons may be evenly spaced out, they’re flush with one another, making it hard to differentiate between them. What’s more, it’s just awkward placement to have it inside. I much prefer the layout of the Plantronics BackBeat Go 410 in-line control module. The mic, however, does interrupt the left cable and it relays voices but clarity is sub-par. Battery life isn’t great relative to comparable products—the most recently reviewed being the Plantronics BackBeat Go 410, which supplies 7.88 hours of playback—the Phiaton Curve BT 120 NC, however, grants just 4.3 hours of noise cancelling playback as per our objective testing. Pair that with the fact that it takes two hours to complete a charge cycle, and you’re not looking at a great ratio.
In all fairness, with noise cancelling inactive, the playback time is nearly doubled at 8.4 hours. Even so, it’s not great. To compensate, the Phiaton Curve supports fast charging: five minutes of charging via the included micro-USB cable affords one hour of playback, which is great for the forgetful. The integrated control module is handy, but its placement isn’t very ergonomic.

The Phiaton Curve BT 120 NC earbuds operate via Bluetooth 4.2, which grants a 10-meter wireless range, and support just the SBC Bluetooth codec. Although this may be disappointing, the outdated firmware and lowest-common-denominator codec make sense since these are cheap noise cancelling earbuds. Plus, don’t get too caught up in wireless audio quality as most of us are unable to discern a difference between streaming quality anyway. As a quick aside, they Curve ‘buds can connect to two devices simultaneously.

See: Time to put your hearing to the test

How does the Phiaton Curve BT 120 NC sound? The Phiaton Curve BT 120 NC earbuds reproduce a palatable sound signature to the general consumer, but it lacks clarity. The earbuds sound good considering how affordable they are. General consumers will enjoy the boosted bass and midrange frequencies are great for most all-purpose headphones. What’s more, the 6kHz spike adds perceived clarity, creating a more dynamic relative to neutral-leaning responses produced by studio headphones.

The prominent bass emphasis is felt in Melt’s song Sour Candy. The kick drum is persistent throughout the yearnful song but happens to be outshined by the midrange frequency reproduction. It’s the electric and bass guitars and that take center stage. During the instrumental solo, which begins at 2:42, the brass section remains audible above the mids. That said, the bass guitar’s reproduction lacks clarity here and through the song’s entirety.

Sjowgren’s song Waiting Room closes out with an urgent drum-guitar duet. The synthesized guitar is designed to sound unclear, but the lack of detail and instrument in between the mids and highs becomes painfully apparent in this loud moment. The cymbal hits are recognizable but the resonance is cloaked by the guitar playing.

The noise cancellation is fine, but nothing to write home about. When activated, I can still hear much of the grinding of my gym neighbor’s treadmill and the talking heads getting airtime on the communal TV. It attenuates sound better than passive isolation alone, though, so that’s a plus. As long as you keep your expectations realistic, the Phiaton Curve BT 120 NC filters external noise just fine.

Should you buy the Phiaton Curve BT 120 NC? 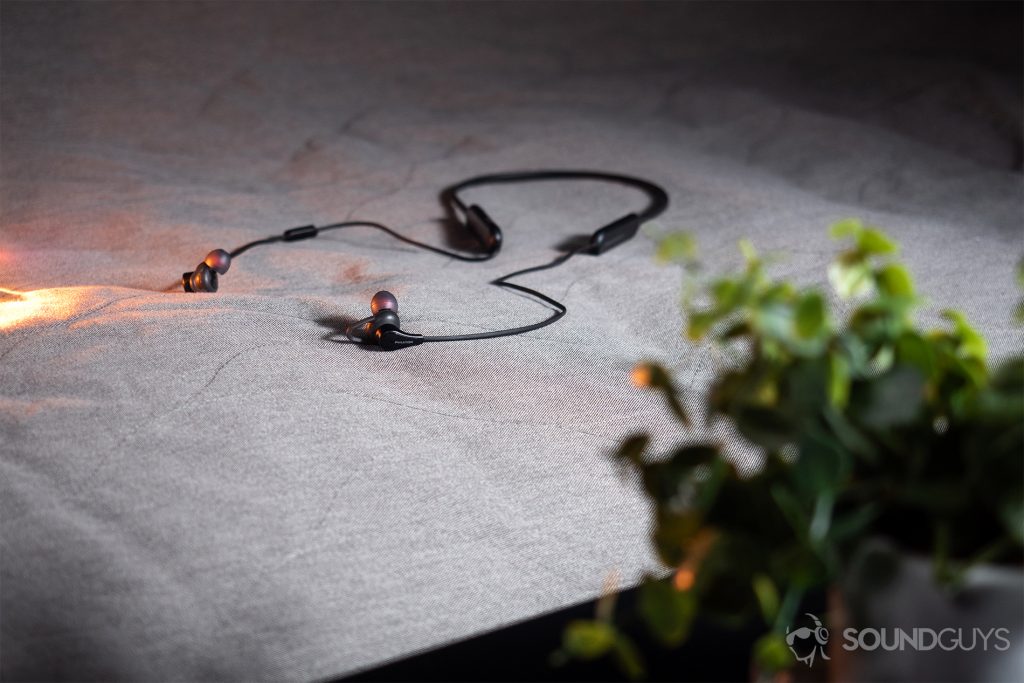 If you favor loudness over clarity and need cheap noise cancelling earbuds, then the Phiaton Curve BT 120 NC may be worth it. Its lightweight body is easy to transport and wear all day long without physical fatigue. While the button placement and lack of virtual assistant access are both annoying, they’re small prices to pay for generally good earbuds. Additionally, while I’m not one to exercise with neckband earbuds, the IPX4 water-resistance comes in handy for gym-goers and those of us living in unpredictable climates.

Now, if you don’t mind shelling out a bit more, then the Plantronics BackBeat Go 410 is a much better option overall. Those earbuds operate via Bluetooth 5.0, have even better noise cancelling qualities, and feature magnetic housings that automatically play/pause media playback.

Phiaton Curve BT 120 NC
7
Premium active noise cancelling earphones with fast charge and excellent sound. Get 1 hour of use from 5 minutes of charging. Featuring a sleek and portable neckband design that is ready to go wherever life takes you. Next Generation Bluetooth 4.2 is backwards compatible and blocks out distraction with up to 95% of ambient noise cancellation