Price
Not portable, needs to be plugged in at all times
Classic amp design might not be for everyone

Though I can't see too many people outfitting their homes with Marshall Stanmore speakers, it would be pretty baller if you did. The speaker has good sound, is easy to connect to, and has a classic feel that you won't get with other modern home audio options. 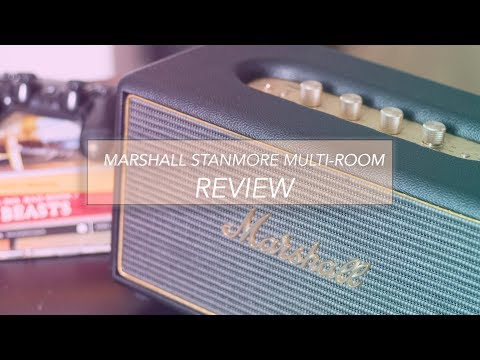 Marshall might be known for their legendary amps, but they’re quickly making a name for themselves in consumer audio. At this point they’ve had more than a couple years of making speakers and headphones for people who won’t be jamming out on guitars with them, and though they’ve all been really good I think they’ve finally nailed most of the things that you look for in a home speaker with the new Stanmore Multi-room speaker. From connection options to overall aesthetics the Stanmore has it all, but it’s going to cost you.

When you open the box you’ll get the speaker nicely wrapped in a microfiber cloth along with some warranty information, the instruction booklet, and a power source for both US and European wall outlets.

If you’ve ever seen a Marshall amp before (or even one of their earlier speakers) then the design of this one should come as no surprise to you. It looks like you could plug a ¼” plug right into it and start jamming on your Strat, but unfortunately you won’t get that functionality here. Instead you get a solid feeling speaker wrapped in leather with golden accents throughout. On the front you’ll find a giant logo and though I usually hate logos on products, I can’t hate on something as classic at the Marshall logo. They get a pass here from me.

The speaker itself is pretty heavy at roughly 10 lbs (or 4.7 kg if you live in the modern world) so although you can definitely pick it up and move it around your house easy enough, you’re going to have trouble getting this anywhere else. It’s not meant to be moved frequently, so just pick a nice spot in your house or apartment and leave it there. Not like you could take it anywhere even if you wanted to since it needs to be plugged into a wall at all times. But on the bright side, it’s slick design is sure to look good regardless where you put it. I tried it out on my kitchen table, my coffee table, and on the kitchen counter and it didn’t look out of place on any of them. So design-wise can’t knock Marshall for sticking to this look because it works.

Along the back are some inputs which include one for the power source, RCA, and micro USB. If you like to connect to your speakers via standard 3.5mm cables don’t worry, Marshall has kept that input you just won’t find it on the back. It’s up top instead next to the four knurled knobs and a few buttons. We’ll get into their exact function in the next section, but the knobs are actually my favorite part about this speaker. The volume, bass, and treble knobs are buttery smooth, and the last input knob has a satisfying click to it when you switch inputs. It also acts as a button for selecting the input with just the right amount of tactile feedback. I can see why some people might not enjoy the classic design of this speaker, but as far as build quality goes Marshall nailed it in my opinion.

How do you connect the Marshall Stanmore Multi-room?

The Stanmore has 7 presets available and compatibility with Bluetooth, WiFi, RCA, and Aux

As you may have guessed from the name of this speaker, the Stanmore Multi-room can be connected to other Marshall speaker. Unfortunately I only have one available for testing so I can’t do much more than say that feature exists. There are three differently sized speakers in the multi-room lineup with the Stanmore being the medium sized one. Naturally this means that this speaker connects to via your WiFi router, so you’ll need to download the app to get it all set up. Once connected you can take advantage of all the good things that come with having a Wi-Fi speaker, like internet radio stations that you can save to one of the 7 presets on the speaker.

It’s also fully compatible with Airplay, Chromecast built-in, and Spotify Connect so once you have it all set up with your WiFi playing music on it is dead simple. Naturally, connection was flawless with zero skips and stutters in my experience because my apartment isn’t big enough to be out of Wifi range. Hell, my apartment building probably isn’t even that big. That said, if you miss having a limited range you can always connect to it via Bluetooth as well. Perfect if you’re having people over and they don’t feel like going through the whole process of downloading an app and connecting over wifi. They can just use Bluetooth.

What do the Marshall Stanmore Multi-room Speaker sound like?

The knobs are super smooth and feel great when you’re adjusting volume.

As you might expect from a speaker of this size, the Stanmore gets loud. Keeping it on 50% was more than sufficient to hear throughout my entire apartment, with 70% touching on “my neighbors hate me” levels. What’s good about this speaker is that just like the amps that Marshall makes, you can choose whether you want to give emphasis to the bass or the treble with the two corresponding knobs up top.

The Stanmore has the aesthetic of a classic amp

With a speaker of this size it’s no surprise that it has a great low end. The bassline in the song “En El Muelle De San Blas” by Mana is full of depth and weaves in and out of the songs with ease. In a weird way it’s almost like the bass guitar sounds so good because if you go to a live show, chances are the bass will be played on an amp like this so maybe my ears are a little biased. To be fair, that also has a negative effect on the drums in my opinion. Where basslines felt smooth and controlled, drum kicks sounded a little hollow to me.

That was also the case with some songs when it came to the mids. I found that the clarity in bass made things ever so slightly muddy, and I ended up upping the treble and lowering the bass knobs by 10% each just to try and force some separation in the song “Hello Cruel World” by Dent May. Though to be fair, it kind of fixed itself at higher volumes. When it came to the high end I found the Stanmore did a pretty great job at avoiding harshness in the bells during the intro of “Little Wing” by Jimi Hendrix without sacrificing any of the grittiness from the guitar slides. The Stanmore has the aesthetic of a classic amp. The Stanmore has 7 presets available and compatibility with Bluetooth, WiFi, RCA, and Aux The knobs are super smooth and feel great when you’re adjusting volume.

In the end there really wasn’t anything that stood out as a major complaint to me. Though it irks me to say it I guess you could consider this speaker as having a “warm” sound with emphasis on the lower frequencies, but it adds a kind of texture to the music that reminds me of being 16 with a guitar. It just has that classic kind of feel which isn’t something you’d get from something like a Sonos. Whether that’s a psychological thing because of the design of the speaker or not, I don’t know. But I don’t mind it. The fact that you can connect via Wifi or Bluetooth is also a plus, and I can see the presets being super useful if you can remember which one is which. A tiny LED screen would be great for that, but then it might make this speaker even more expensive.

It’s already $450 as it is, which makes it kind of hard to recommend to be honest just because if you’re going to be outfitting your house with wireless speakers you’re probably going to go with Sonos. Though having a house full of Marshall Stanmore’s will 100% make you way more baller in my opinion, I can’t see too many people doing that. That said, all three models of the multi-room speakers are currently sold out on their site so apparently people don’t mind the price tag and to be honest if I could afford it, I would love this speaker too. Bottom line is if you’re looking into wireless speakers, I would definitely give these a shot.

Marshall Stanmore Multi-Room Speaker
10
Easily set up your single or multi-room wireless system in just a few Steps. Connect wirelessly with Chromecast built-in, Spotify connect, airplay or Bluetooth, or go wired with a 3.5mm jack or RCA cord. With seven one-touch presets. This speaker gives you immediate access to artists, Albums and playlists on Spotify or internet radio stations. Using multiple Marshall multi-room speakers you can wirelessly play different songs in each room or bring it all together and play the same song throughout the entire home.