It may be on its way out, but Google Play Music is one of the best streaming services out there.

Limited device deactivations
Will eventually be replaced
No visualizer

Google Play Music might not be as popular as Spotify, but it offers a credible competitor at a lower family plan price than Spotify Premium. Considering that, the more friends you have: the more likely you want Google Play Music than you do Spotify.

The MP3 era is finally dead, but if you’re reading this, you’re in the market for an honest-to-god streaming service that will allow you to access your tunes anywhere and—hopefully—find new bangers along the way. While there’s no perfect solution without an unlimited data plan, you should consider Google Play Music… or should have considered, because it’s finally crossing that rainbow bridge in 2020.

Editor’s note: After details from Google were released on May 12, 2020, we can no longer recommend jumping on the Google Play Music train. While there was absolutely no need to kill it or even create YouTube Music in the first place, Google is pulling the plug on GPM forever later in 2020. If you already subscribe to Google Play Music, be sure to read the YouTube blog post on porting over your library. 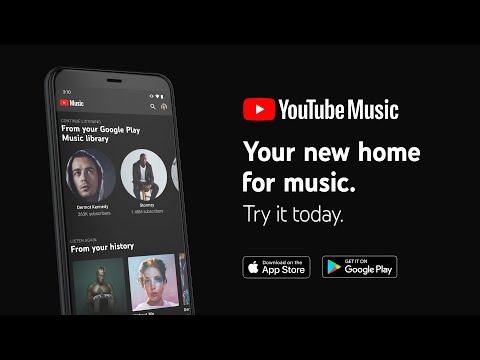 What is Google Play Music?

Google Play Music is Google’s answer to Spotify, Tidal, and Apple Music. Essentially, it’s a music-streaming platform that was created before YouTube became the default music player for many people. It’s built with a traditional-style interface, along with tools like radio (which allows you to find music similar to what you want to hear more of), podcast discovery, finding bands playing near you, browsing the top charts, as well as uploading your own files to stream anywhere. Google Play Music is a great choice of streaming platform if you frequent places with unreliable data connections.

Among the streaming options out there, it’s probably one of the more mature platforms. However, Google is a little cagey about committing to it. A couple of years ago, YouTube Music was released, instantly becoming a competing platform. But if you pay for YouTube Premium, you get a Google Play Music account as well, so it’s confusing, right? We here at SoundGuys recommend going with Play Music for more than a few reasons, but the big one is that it has that much more functionality.

Like Spotify (Premium), Tidal, and Apple Music, you can store files locally with Google Play Music, and listen to selected playlists without a connection to data. If you don’t have an unlimited data plan, this feature is a must for any streaming service you use, as it will be the single best way to avoid overage charges.

How to use Google Play Music

After you choose whether you want a single listener subscription or a family plan, you can log in using your Google account to access Play Music. If you’re on your phone: you can just select your account from the list that pops up. You won’t have to sign in again after you run through the app setup. Google Play Music has some great playlists to choose from.

From there, you can use the search bar to find music that you like. When you do, click the three dots to the right of the track or album. Then, you can add the music to your library, or a playlist of your choosing. You can also start a radio station based on that one song or album if you choose to.

I personally recommend also clicking on the thumbs-up icon for each song you want in your library, because you currently cannot download your library onto your device at once. You can download playlists, and selected music—but not your whole library. Why this is the case is probably due to some arcane licensing agreement (or a lack of attention). By giving the tracks a thumbs-up, you add it to a playlist called “liked,” which can then be downloaded.

How to use playlists

You can create playlists either on the computer or on your smartphone by adding a song to a new playlist, and naming said playlist. That’s it! From there you can share your playlist with the public, rename it, download it, or delete it. If you have a playlist downloaded, it will automatically download the new tracks you add to it in the future. This is true of podcasts as well: you can subscribe to a podcast, and when new episodes drop, your phone will automatically download them once your specified connection is established.

How to find new music

Make liberal use of the radio feature. Find a song that you like and wish there was more of, and start a radio station. You may notice some unrelated songs from your library in there, and that’s because Google Play Music is attempting to learn what kinds of music people like you are after. Fight the urge to thumbs-down anything in your library, and just skip over it if you want.

If Google Play Music sees you listening to a lot of one band, it will suggest others like it.

However, I should point out that I’ve found most of the new music I like through this feature, and if you use it often enough: you can even discover genres of music you didn’t even know existed. This is partially because the library of available music is so huge, but also because the platform also includes a lot of music that originates from the internet and popular entertainers that aren’t strictly musicians.

If you don’t have an unlimited data plan

Definitely download everything you can if you don’t have an unlimited data plan, or will be listening away from the computer. Before you do that, though, you’ll want to make sure that you have a lot of space on your phone or SD card, as the high-quality files can be a little memory-hungry. Open the settings menu by tapping the hamburger menu in the top left, and clicking “settings.” Once in there, you can prevent streaming from your mobile network, set the quality of your downloads, and more.

Obviously, if you have an unlimited data plan, just go nuts!

Google Play Music can be had for $9.99 a month for a single user, or $14.99 a month for its family plan. At the same day every month, you’ll be billed, and that’s that. You’ll be able to listen to music on up to 10 authorized devices, and you can deactivate up to four devices a year. While that’s a little nonsensical, it’s not something that you’ll run into issues with very often.

The service will be tied to your Google account, and that’s how you’ll sign into the service. It’s also how you’ll pay. No splitter necessary to share with friends and family.

Google Play Music’s family plan will allow you to have up to six different Google accounts access the service with their own libraries, uploaded music, the works. You can add accounts through the “Family settings” menu option under the aforementioned settings menu. Add your friends and family’s emails and they’ll be able to share access to the account as if it were their own.

If you’re a Spotify user, you’ll notice that while the single subscription is the same price, the $14.99 6-member family plan is a much better deal than grabbing Spotify’s $29.99 per month for five members. However, that Spotify membership does offer Hulu (with ads) on top of it, so if you’re looking to combine your streaming services, Spotify may be the better deal. If you’re like me, you only share your Hulu subscription with one other person, though, so the $11.99 ad-free package is still less money than the Play Music family package plus Hulu.

How good is the sound quality?

Currently, Google Play music streams and converts uploaded music to 320kbps in the MP3 encoding. While that’s all well and good, there’s no guarantee that you’re actually getting that rate, as the bandwidth available will dictate the quality. The same is true for any service, but you might find that you aren’t getting the quality you want.

Be sure to open the settings and toggle the “Always high” quality option. If you don’t, I find that the service gets a little aggressive about saving bandwidth to avoid skips and stops. The tradeoff here is that you’re using more data, so mobile users beware.

While Google Play Music was once the service that paid out the most for its artists, over time that payout-per-listen fell dramatically. However, that’s true of all streaming services. If you care about supporting your favorite artists, it’s often a little better to buy the albums and digital downloads outright if they sell on an independent platform like Bandcamp.

In any case, music industry site Digital Music News and the blog The Trichordist have been compiling rough figures for the payouts enjoyed by artists for the last few years, and as you can imagine: the rates are pretty abysmal.

These are only rough figures, and there’s no set rate that payouts happen for each artist, so take these figures with a heapin’ helping of salt. However, they are indicative of what we’ve seen from other sources. With streaming services generating a ton of income, it can be a little disheartening to see that so little income goes to the artists—but that’s just the name of the game at this point. As it sits right now, Google Play Music is in the middle of the pack. So while they don’t offer the payouts they used to: they’re not the worst, either.

Can I listen to my own library on Google Play Music?

By installing the upload utility (or loading the files onto your phone), you can upload your own songs—DRM or no—and then have access to them anywhere. When you install the upload utility, all you have to do is point it at a folder where your music lives, and it’ll start uploading the music to Google’s servers automatically. You can also drag and drop files into the window for upload.

In theory, YouTube Music is the successor to Google Play Music—in theory. While Google looked to cash in on YouTube’s popularity for streaming, the new app still sucks quite a lot, and doesn’t have the same functionality as Google Play Music had even in 2013. It’s bad—and not in the good 1980s “bad” way. YouTube Music is not the replacement we need (or want).

One thing in particular that has been frustrating early adopters is the fact that the half-baked file system won’t allow you to add your own files to playlists, nor can you cast them to other devices. That’s not a problem suffered by Google Play Music subscribers.

Google has come out and said that they won’t retire Play Music until all the functionality is ported over to YouTube Music, but as of May 12, 2020 it looks like they’re forging ahead anyway. Unfortunately, it’s time to say goodbye to Google Play Music, and shake our fists at Google killing yet another useful service.

How do I use Google Play Music on my iPhone?