The Beats by Dre Studio3 Wireless are a great gadget, but a bad pair of headphones. If you have $300 for headphones, look elsewhere. 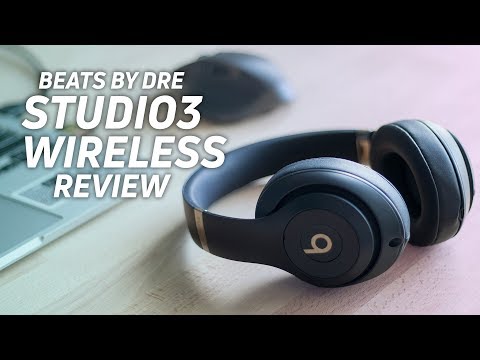 Editor’s note: this article was updated on April 23, 2021, to address other alternatives and include technical information.

Who are the Beats Studio3 Wireless for?

What’s it like to use the Beats Studio3 Wireless?

The headphones are made entirely of stiff plastic, though the matte finish feels good in the hand.

The Beats Studio3 Wireless headphones are made of soft, matte plastic, which is really smooth to the touch. They’re not as much of a fingerprint magnet as you might suspect, and the plush ear cups are nice. I can wear these for hours at a time before my ears begin to hurt, though the leatherette gets hot after a few hours. The same can’t be said of the headband: it’s made of a hard, grippy plastic that tugs on my hair.

You can quickly compact the headphones for travel, and the headband is adjustable. The Studio3 Wireless feels stiff and you can feel the headphones stain against minor torsion. Luckily, they do come with a hardshell carrying case that I would recommend using if you decide to pick these up.

These have a few different buttons and, despite the symmetrical look of the headphones, they’re all located on the left side (save for the power button). Clicking the “b” logo on the left ear cup once will pause or play music, twice will skip to the next song, and three times will return to a previous song. You can also press and hold the button to access your phone’s smart assistant. Above and below the “b” logo is where you’ll find the volume up and volume down controls.

How do you connect the Beats Studio3 Wireless?

The button on the left ear cup is painfully and unapologetically plastic and sounds cheap every time you click the button.

The Beats Studio3 headphones support the SBC and AAC Bluetooth codecs and have Class 1 Bluetooth and Apple’s very own W1 chip. If you’re in the Apple ecosystem, you’ll automatically be able to use them with all of your iCloud devices without needing to re-pair to them. If you’re on Android, you’ll have to pair the good old-fashioned way by opening up your Bluetooth settings, but even that is pretty seamless. Connection strength is also strong regardless of the operating system. I’m pretty sure it’s supposed to be better on iOS, for obvious reasons. Yet, roughly half of my testing was done on my Pixel 2XL, and I didn’t experience any annoying skips either, so that’s good at least.

Now I’m sure I’m not alone in saying that I watch a lot of YouTube, and the Studio3 Wireless offer no delay on both iOS and Android. I guess this sucks if you’re a huge fan of old kung-fu movies, but this is good news for the rest of us.

The connection strength was solid and there were no noticeable skips or issues on iOS or Android.

On the bottom of the left ear cup is the 3.5mm input, so you can plug in the included audio cable with a mic and remote. And before you ask, no, it doesn’t end in a lightning cable and, no, it doesn’t come with a dongle, which makes perfect sense. Moving over to the right ear cup, you’ll find that it looks exactly the same but does absolutely nothing. It’s just the logo. Under that, you’ll get the power button and five small LED lights that let you know roughly how much battery is left. Double-tapping the power button also lets you toggle the active noise cancelling on and off, so long as you’re on an iOS device. To toggle noise cancelling with an Android, you need to download the Beats app. Then at the very bottom is a micro USB port, which isn’t a USB Type-C because, reasons.

Editor’s note: this review will soon be updated with an isolation chart.

Now, these are active noise cancelling, which is kind of the point of getting these headphones. You can turn the ANC on or off in two ways: one is by clicking the power button twice, and the other is in the actual Bluetooth settings app on iOS. On Android, you don’t have this option, but ANC can be toggled if you download the Beats app. The headphones by default always have the ANC on, and it adapts to the amount of sound going on around you.

Beats claims a battery life of 22 hours with active noise cancelling turned on and 40 hours without. For reference, Bose claims about 20 hours of constant playback on their QC35 headphones. In our testing here we got 10 hours, 12 minutes on 100% volume with ANC turned on, so it isn’t hard to see how you could push these well beyond the 22 hours unless you want to blow out your eardrums.

The only button on the right ear cup is the power button on the bottom, which also lets you turn off or on active noise cancelling if you double tap it.

Editor’s note: this review will soon be updated with a frequency response chart.

When it comes to headphones that I’m going to be using for hours at a time on plane rides and commutes, I want three things: comfort (which I already spoke about), battery life (which is pretty good), and sound quality. If I’m taking a 20-hour plane ride, chances are that I’m going to be staring wistfully out of the window at some point, reminiscing and listening to my favorite Bon Iver song, as we all do. At that point, sound quality becomes really important.

Now, these headphones are notorious for favoring bass. The lower frequencies are heavily emphasized, to the detriment of basically everything else. The one example that I could point to, which demonstrates this perfectly, is the song Never Look Back by Slow Club which starts off with some slow finger snaps that get overtaken significantly when the bassline comes in. That really shouldn’t happen. The vocals that come in at about the same time also don’t benefit from the bump in bass. Besides just an overall lack of clarity in vocals, the underlying melody is given way more presence than it should have.

In typical Beats fashion, bass notes are amplified over all else.

So if you listen to the song, this will be easier to understand, but around 0:08 seconds in, the main melody comes in, which is a female vocal layered on top of another vocal singing that same melody at a lower register. With these headphones, that secondary melody is more or less equal in output to the main melody which, by definition of being a secondary melody, shouldn’t be the case.

The highs are hardly any better and feel like an afterthought. During the chorus of the song Hello Cruel World by Dent May, the cymbals are supposed to be rhythmic in the way that they overlap each other, but they end up sounding more like flat hi-hats with no decay.

Should you buy the Beats Studio3 Wireless?

Though the plush ear pads are comfortable, the grippy plastic on the bottom of the headband is annoying to wear.

I have a hard time recommending these. The Studio3 Wireless feel like they were haphazardly thrown together just to try and take a piece of the ANC market currently being ravaged by Bose and Sony. They offer sound significantly worse than both the QC35’s and the Sony WH-1000XM4, a build that feels like it’ll crack if you bend it too much, and, though the ANC is decent, it isn’t better than its alternatives.

Beats Studio Wireless Noise Cancelling Headphones
All prices listed in USD unless otherwise specified. Prices may change over time, and vary by region. Unfortunately, we cannot list Amazon prices on the site, as they vary greatly by currency.

I’m usually a little more lenient with Beats products because I know they’re going to sell anyway, but the Studio3 Wireless are bad. For a pair of headphones named “Studio” you should never, ever, ever use these in the studio. Save your $350, you don’t need these.

What should you get instead of the Beats Studio3 Wireless?

The Sony WH-1000XM4 headphones are some of the very best ANC headphones in the business.

If you have $350 to spare on a pair of headphones, I definitely recommend you get the Sony WH-1000XM4 over the Beats Studio3. Their active noise cancelling performance is one of the very best available, they offer Bluetooth multipoint amongst other features, and their sound signature is much more accurate than the Studio3. If you want to save a bit of cash, go for the older Sony WH-1000XM3.

What about the Apple AirPods Max?

The Apple AirPods Max don’t have folding hinges which is a bummer, but the ear cups do rotate 90 degrees to lie flat.

The Apple AirPods Max is even more expensive than the Beats Studio3 Wireless, but Apple’s debut ANC headphones come packed with advanced hardware and software. Each ear cup houses an H1 chip for maximum processing power, and the headset supports Spatial Audio, which is great for virtual media like movies and games. It isn’t perfect though, and you can read our in-depth review here.

Do the headphones have speaker capability?

No, you cannot use the headset as a speaker. It only plays audio through the ear cup drivers into your ears, and isn't meant to emit sound beyond the scope of your ears.

How do I update the Beats Studio3 firmware?

If you have an iPhone or iPad, make sure it's running the most recent version of iOS or iPadOS. Connect your headset to the source device, and the firmware will update automatically. If you own an Android device, you must download the Beats app from the Google Play store, and update the firmware from the app.

Do the Beats Studio3 Wireless have an microphone?

Yes, the Beats Studio3 Wireless headphones have a microphone. You can also use the "b" logo on the right ear cup to answer or reject phone calls.

Do the Beats Studio3 Wireless headphones have any IPX rating?