Even if you can pick these up refurbished for a decent price, don't. There are better options for the price.

The Beats Solo 2 headphones were flying off the shelves when first announced but now there are way better options. In fact, you probably won't find these unless you buy second hand. If you were once a fan of the Beats Solo 2, there are plenty of other more modern Beats products like the Solo Pro or the PowerBeats Pro, but the Solo 2 are not worth the money. 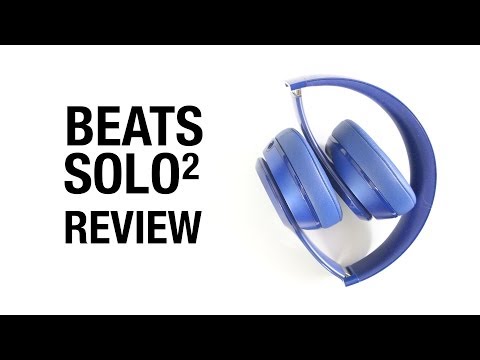 Beats has been one of the most popular brands in audio for a while now and that’s in no small part due to the success of the Beats Solo line of headphones (and marketing). The original Solo headphones sold like hot cakes and the Beats Solo 2 did the same, but are they worth picking up now when there are so many other obvious options available? Maybe for the right price, but they’re not among the best Beats headphones anymore—wireless or not.

Editor’s note: this Beats Solo 2 review was updated on February 2, 2021, to include a contents menu.

What is it like to use the Beats Solo 2?

The Beats Solo 2 headphones come in a variety of colors. For this review, we’re looking at them in blue, though black, white, silver, red, and pink are also available. The finish is very shiny, though it didn’t seem to attract nearly as many fingerprints as I initially thought it would. Still, if you want these to look their best, you might want to keep a microfiber cloth handy to keep them clean. These headphones also feature no visible screws and use a flush hinge design. The Beats Solo 2 look very similar to the previous model.

The inside of the headband has a very nice feel, almost like leather, though it’s clearly plastic. Putting them on, the Beats Solo 2 are fairly comfortable, though the fit was definitely snug. It wasn’t enough to be uncomfortable, though your mileage may vary. If you’re thinking about picking these up, you might want to see if you can try a pair on first just to see if you can deal with the tight fit.

After an hour or two, the headphones felt less comfortable than they had at first, but after a five-minute break I was able to resume wearing them and they felt comfortable again. Though they don’t feel brittle, the Beats Solo 2 are far from the most flexible-feeling headphones we’ve tried.

This has always been a style-focused brand, and that influences the box as much as it does the headphones themselves. Slide off the outer portion of the box, and the box that contains the headphones is solid red, aside from a slight bit of embossed branding on the very front. Open up the box, and the first thing you’ll see is the soft carrying case. The headphones themselves are already inside the case, and everything else is underneath. You’ll get a 3.5 mm audio cable, carabiner, and a packet containing the manual, warranty info, and of course a sticker.

How do you connect the Beats Solo 2? The Beats Solo 2 connect to your source device 3.5mm inputs.

If you’re looking for Bluetooth, you’re going to need to check out the newer Solo3 or the Beats Solo Pro (which I’ll get into later), as the only connectivity you’ll find in the Beats Solo 2 is the 3.5 mm audio cable with built-in mic and remote. Luckily, unlike a few other brands out there, the cable uses standard 3.5mm jacks on both ends instead of any proprietary connections. So on the off chance that the cable dies on you, you can easily replace it with another cable.

The built-in remote is of the three-button variety, though how much functionality it offers depends on the device you’re using. Only the middle button works on Android devices, providing the same functionality as a one-button “clicker” style remote. If, however, you use an iOS device, all the buttons will function as expected. Call quality was fine with the built-in mic, though these probably aren’t a pair of headphones you’ll want to wear for making calls around the office.

How do the Beats Solo 2 sound?

Plenty of self-styled audiophiles like to look down on the audio quality of Beats headphones, as is always the case with popular companies. For quite a while, there was some good reasoning for that, but lately the company has been making quite a few steps in the right direction, and as a result, the sound quality of the Beats Solo 2 is not to be dismissed easily. Keyword: easily, because it can still be dismissed considering how expensive these are. These are surprisingly comfortable thanks to the padding, but they still fit tight on the head.

In testing I played CDs and lossless audio files from a computer through a Focusrite Saffire Pro 40 audio interface for purposes of testing fidelity. Though it would be an odd choice for such a style-focused brand to ignore mobile devices, I also streamed songs from Rdio on my Moto X to make sure that volume was adequate. It was.

One of the main things Beats headphones are known for is boomy, overpowering bass. That is not the case with the Solo 2. While bass is certainly strong and well represented, it doesn’t overpower the mids as was the case with older headphones from this company. Bass also seems to be focused lower on the frequency scale, rather than the focus on the 100–500Hz range, which can lead to unpleasant masking of deeper vocals. The Beats Solo 2 headphones are collapsible, so they can fold down for transport.

The mids are slightly less loud in volume but not nearly as much as I was expecting from my experience with older Beats headphones. Overall, the midrange is fine though depending on the song, I did notice the occasional touch of harshness in the upper mids.

The highs slightly rolled off to avoid distortion but did a good job at avoiding sounding muffled. Cymbals and other high end details are well represented, but it sounds like the absolute highest highs are subdued to make for a more pleasant listening experience.

Soundstage is decent — nothing felt closed in, though I was never surprised by the sound either. Overall this is a nice sounding pair of headphones that eschews absolute accuracy for a more hyped sound with more of an emphasis on the low end of the frequency range. The sound means you’ll notice emphasized lows and highs, though they don’t go anywhere close to as far as older Beats headphones did. The Solo 2 headphones sound fine, but there are better options for the price.

If you’re worried about angering your immediate neighbors while cranking your tunes on the Beats Solo 2, don’t be. Sound leakage is almost nonexistent here. The headphones also do a good job of keeping out outside sounds, though obviously no active noise cancellation is present.

So should you buy the Beats Solo 2?

The Beats Solo 2 might have been flying off the shelves when they were first released, but you shouldn’t waste your money on them today. Besides, you can really only find them refurbished anyway and even then they’ll still cost you around $100 which just isn’t worth it. Even if you were just looking for a throwaway pair of headphones to have as a backpack or something to give as a gift, there are better headphones for less money you can choose from.

If you have your heart set on a pair of Beats headphones, then just wait for the Beats Solo Pro headphones to go on sale and scoop those up as those are actually a good pair of headphones. For people who are willing to spend extra cash for noise cancelling headphones, without leaving the Beats ecosystem, check out the Beats Studio3 Wireless. But if you’re after a pair of Beats Solo 2, don’t bother. Before you make a decision, make sure to check out some alternatives to Beats as well.

The best Beats on-ears are the Solo Pro headphones Android users need to hold the “b” logo down for a few seconds to access Google Assistant.

If you have your heart set on a pair of Beats on-ears, then you should check out the Beats Solo Pro. As they’re still Beats products you’ll still end up paying a pretty penny for them, but unlike many past products from the company these are actually a really good pair of headphones. You’ll get Bluetooth 5.0, the H1 chip for easy pairing and slick connections, around 20 hours of constant playback, and top-notch active noise cancelling as well.

What about the Beats Solo3 Wireless?

In the time since the Solo 2 headphones were released, a lot has happened. Not only has Apple released the Beats Solo3 Wireless, but they’ve released a few other Beats products as well including a pair of active noise cancelling over ears, on-ears, and even a pair of true wireless earbuds. The Beats Solo3 Wireless headphones offer much of the same benefits of the previous generation, but also have some new tricks thanks to being wireless.

If you like the idea of the Solo 2 headphones but wanted an updated version of some modern specs, then the Solo3 Wireless headphones are the ones to go for. These have a few notable improvements like the addition of Bluetooth, playback controls built into the headphones, and Apple’s W1 chip which allows for easier setup and a better connection with iOS devices. With a wireless connection comes other issues, like the fact that they need a battery that can then eventually die. Luckily, the battery life of the Solo3 is superb, at around 30-40 hours of constant playback depending on the output of your music. If you’re more into earbuds, there’s also the Powerbeats Pro that you should check out. While these are definitely more expensive than the Solo2, they’re also smaller, sound better, and (let’s be honest) have a way higher cool factor because of their true wireless abilities. You’ll get around 10 hours of constant playback here as well as a more refined Beats sound. So while the low end is still emphasized, it isn’t to the exaggerated amount that previous Beats products are known for. Plus, they’re sweat-resistant so you can wear them to the gym if you want to.