A party speaker for people who party

The Sony XB41 is a great speaker for anyone who needs something durable, loud, and will last you all day. Despite its flaws, it's still a great option for anyone looking for a speaker to bring to the next backyard barbecue. 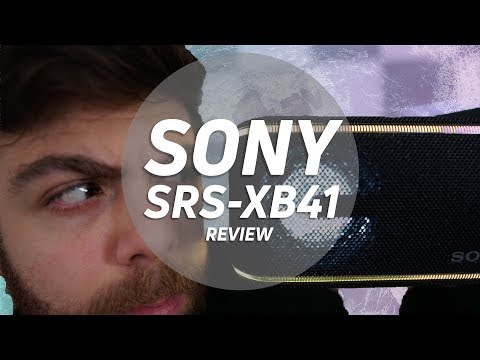 When it comes to its Bluetooth speaker Sony likes to do things in groups. A few years ago at CES Sony added four speakers to their Extra Bass line, and then in 2017, they gave three of those speakers a makeover. One of them was the SRS-XB40 which we recently reviewed, and now we’re looking at its successor: the SRS-XB41. Despite a completely new look and build, it doesn’t differ in too many ways from the previous model. But there’s a lot to like about the XB40, which means there’s a lot to like about the XB41—right?

Editor’s note: this review was updated on January 19, 2021, to reflect pricing changes and update formatting. Who should get the XB41? The lights all around the speaker can be controlled via an app or turned off completely.

One of the first things you’ll notice about the redesign is that the XB41 is covered in a fabric that’s similar to what you’ll find on popular waterproof speakers like the JBL Flip 4 or the UE Wonderboom. It’s tightly woven around the entire speaker, so you don’t really see any of the plastic that lies beneath—save for the rubberized, plastic LED strips. Behind the fabric are dual 58mm drivers. Both are lit up by small lights that pulse to the music. There are also two smaller lights on the side of each driver that flash rapidly, similar to what you’d see on the wings of an airplane.

Let’s double back and talk about the light strips though, because I really like them. This speaker doesn’t have the same hard rounded edges that the XB40 has, so having a light strip around the edges reminds me of learning about leading lines in art class. It’s simple, but it makes the speaker look sleek in a way that the XB40 didn’t. That, combined with the fabric covering, and the simple Sony logo on the front makes this speaker look like a mix of Sony’s retro past and technological future. I don’t know how many other ways I can say how much I like the design, so let’s talk build. While the XB40 is IPX5, the XB41 is IP67 dust and water-proof, which is great news if you plan on using this at the beach. But because of the fabric covering, you might have some problems with keeping it clean. If this fabric acts like any other fabric that I’ve ever come across in life, then I can see it being a bit of a hassle to clean things like sand and dirt. But that’s a small price to pay for being able to completely submerge a speaker like this in the first place. Part of my job is to think of things that I can’t really test in just a few weeks of testing, and the longevity of this fabric deserves to be brought to your attention.

Around the back of the speaker is a small rubber flap that protects all of the inputs and hides a few buttons. One last thing to be aware of is the size of this speaker. It’s pretty large, and you might want to think twice about throwing it in your backpack as it weighs 1,444 grams. This is both good and bad, because a bigger size means bigger drivers for stronger bass. We’ll get into sound quality a little later, but just be aware that this isn’t a small speaker. Under a single flap are all of the inputs, outputs, and a few buttons for some special features.

Underneath the flap on the back, you’ll get a DC input for charging the speaker, a micro-USB input—you can also charge it up that way, but it takes longer—a 3.5mm input, a USB output to charge your devices, and three buttons above all of those. One of them tells you how much battery is left in the speaker and also turns off the light strip if you hold it down. Another labeled “WPC” lets you daisy chain more than one speaker together via Bluetooth, and the third lets you turn a pair of speakers into L and R channels. It’s a lot. I can’t see too many people using some of these features, but at least you have the option.

Along the top of the speaker is where you’ll get all of the playback controls that let you adjust volume, pause or play music, and skip between tracks depending on whether you double or triple tap the play button. There’s also a power/Bluetooth pairing button and a new button called “Live,” which is supposed to make the music sound like you’re at a live concert. Unfortunately, all it does it make the music sound terrible, so I never pressed it. I would’ve preferred they keep the regular “extra bass” button.

It’s rocking Bluetooth 4.2, has AAC and LDAC compatibility, and NFC for quick-pairing with a compatible device. All you have to do is tap your phone to the NFC logo and a notification will pop up to connect. As far as range goes, I haven’t had any issues with dropouts or stuttering anywhere within 50 feet. The only problem that I had was when more than one device was connected to it simultaneously. If I was playing music on one device and started doing something on the other, the sound from the second device would take over for a second and pause the music. The speaker would correct itself after a second or two but the music would be louder than it was before— almost like it reset. So switching between source devices could use a bit of work. The speaker has lights shining on both drivers.

You can control the color of the lights and some other cool stuff as well via two Sony apps called Fesitable and Music Center, both of which suck. There are cool effects you can do like adding DJ effects and drum kit sounds, but the app is so finicky it’s really not worth it. And God forbid the speaker does one of those random skips it does when connected to more than one devices, because then everything just stops working. I had to un-pair and reconnect just to play music again. Basically, as a speaker, connection is great. But once you start trying to take advantage of some of the other features, it becomes a problem.

Sony claims a battery life of 24 hours with the lighting off, but on average use, this speaker has lasted way longer than that. It’s been three days of music playing at around 50 percent volume for roughly six hours per day with the lights on, and the battery still says it’s at 50 percent. Once it does die though, it takes about five hours to charge back up fully, but that’s to be expected because of how large the battery is.

But how does it sound? The XB41 doesn’t look half-bad on a desk, but it’s meant for outdoor activities or parties.

I alluded to this earlier, but now I’m going to confirm it. The XB41 was made for bass lovers. This is the part of the review where I recommend a song that I listen to and try to point out something that bothered me at a particular part. This time, I might as well just point you back to the same sound quality section from the XB40, because I got about the same impression with a few slight differences.

For one, the XB41 has a very similar sounding low-end. It’s big, powerful, and in your face but doesn’t destroy everything in its way. I’ll admit that there’s a little more overlap between the mids and lows here, making for a not-so-clear listening experience. Plus, this speaker puts a little more emphasis on the low-end, which tends to mask vocals (especially male vocals). But overall, I again like the way Sony handled it here. I can’t see too many people at your next party complaining about it even if lows are a little excessive for critical listeners.

The Sony SRS-XB41 has a very intense bass response.

The bass notes in Frank Ocean’s rendition of Moon River feel way too strong compared to the vocals. Highs are fine for the most part, but like the XB40 they were a little under-emphasized. At high volumes, this means you won’t have to worry about harsh sounds, but at standard listening volumes, this just resulted in cymbals and hi-hats in the song Generator ^ Second Floor by Freelance Whales being too weak to push through the mix.

Should you buy the Sony SRS-XB41?

Like the XB40, this speaker is easy to recommend to anyone who finds themselves needing to power a party or two. The lights, combined with the bass-heavy sound signature, and the nearly indestructible build make it perfect for basically every college party I’ve ever gone to—and more than a few backyard barbecues. The overall design looks a little better than the XB40, in my opinion, but the live mode button is pretty useless and the apps still need work. The closest speaker I can think of that’s comparable would be the UE Megaboom, but even though the Megaboom is cheaper, I prefer the XB41 over it. Both speakers were made for parties and, let’s be honest, the one with the flashing lights is sure to turn more heads. Sure, it doesn’t have 360-degree sound, but it does have better quality. If you have a budget around $350 and want a durable speaker that gets loud, sounds good, and gets the job done, this is easy to recommend. This price was recently bumped up from about $250, but you can get it used for a cheaper price point.

Sony SRS-XB41
8.4
Feel the power of extra bass with live sound mode for an immersive 3D sound experience Waterproof and Dustproof IP67 design for worry-free usage Build energy with a Multicolored line light, speaker lights and flashing strobe Listen all day and night with up to 24 hours of battery life