Sony XB40 vs XB41: 5 differences you should know

Which one is right for you? 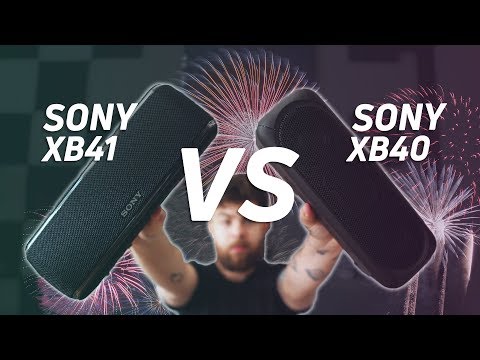 Last year Sony came out with a few new speakers, one of them being the SRS-XB40. Now the Sony XB41 is out too, and we thought it’d be a good idea to pin the two against each other and see which is better. We’re going to talk about five main differences between the two speakers that you should know about before pulling the trigger on either.

Along the way, we’ll answer a few other questions like 1) if you already have an XB40 should you upgrade to the XB41? And 2) which one sounds better? We’ll answer these later on, but before we do, it’s important to know who these are for. If you’ve read either of the full reviews you would know that the type of person Sony is targeting with both of these speakers is more or less the same. If you’re the kind of person who likes to have parties or even the occasional backyard get together, the Sony team thinks you’re going to like these speakers. Okay, let’s get into the five main differences.

Both speakers have LED light strips, but the XB41 has them angled around the back while the XB40 has them only around the front.

First, let’s talk build. The XB40 is IPX5 while the XB41 is IP67. If that meant nothing to you, don’t worry. You can read all about IP ratings here. But the XB41 is the winner, because an IP67 rating means that it’s completely waterproof; you can submerge it in up to one meter of water. Also, it’s covered in a fabric that makes it sand and dust-proof making it the better option the beach. Plus, it just looks better in my opinion with the rubber LED strip all around the edges instead of just around the grill like in the XB40. That strip also provides some much-needed grip that the XB40 is lacking because of its all-plastic construction. To be fair, the Sony XB40 has a water-resistant IPX5 build, which is still good if you get caught in the rain or if someone spills a drink. However, should you drop it in the pool, kiss it goodbye.

The XB41 is slightly longer in length than the XB40.

While we’re on the subject of build, we can’t ignore portability when talking about Bluetooth speakers. And if you want something lightweight and easy to carry, neither is a good option. Actually, you might be better off looking at something like the UE Wonderboom. But the Sony XB40 beats out the XB41—slightly—as it’s both smaller in size and weighs less. The XB40 weighs 1,428 grams while the newer Sony XB41 is slightly longer in length and weighs in at 1,444 grams. It might not seem like a big difference but anyone who’s gone hiking knows that every little bit counts, making the XB40 the better choice.

Around back are the inputs for both speakers, though the XB41 has some extra buttons as well.

Now we can start talking about some of the features that differentiate these two speakers. The main one that might interest you is something called “Wireless Party Chain,” which is exactly what it sounds like. It’s the ability to daisy chain multiple speakers together over Bluetooth, assuming that you have a few grand to blow on a bunch of Bluetooth speakers. With the XB40 you can use this feature to connect up to 10 speakers together all playing the same music, which is pretty dope. But the newer XB41 blows that out of the water and can connect to up to 100 other speakers. So if you’re thinking of throwing the biggest Project X-style party ever, the XB41 is the winner.

Looking down from above, you can see the buttons on the XB40 are much larger and and the XB41 keeps it sleek and simple.

Getting into sound, these speakers have two different ways to let you enhance what you’re listening to on the fly. The XB40 has an “extra bass” button up top which turns the second passive radiator on and pushes more air. The Sony XB41 has a “Live Mode” button, which makes your music sound like it’s coming out of trash cans. I’m not going to be subtle about it, the XB40 wins by a long shot.

The drivers in both of these speakers are lit up by lights, but the materials protecting them are different.

Now we’re at sound quality, and if you caught either of the full reviews we did for these speakers, you’ll know that they sound pretty similar. Both have a strong low-end that lives up to their “extra bass” names, and both get loud enough that just one of them can easily power most parties. But when it comes down to it, the XB40 has a slight edge in sound quality, because the low end isn’t as overly emphasized as it is on the XB41. That all means nothing when you hit the extra bass button as all the power goes to the low end, but at least you can do that if you want to. The XB41 Live Mode just makes your music sound bad.

Which one is better? The XB40

Those are the five most important differences that we found between the Sony XB40 and the Sony XB41. In the end, we think the SRS-XB40 wins out over the newer—and objectively prettier—SRS-XB41. Not to mention that because the XB40 is the older model, it’s also quite a bit cheaper, making it easier to snag more than the XB41. Of course, if for whatever reason you want to connect more than ten speakers together, then you have no choice but to go with the SRS-XB41. Granted, that customer is so few and far between that we still think you’ll be just fine with the option to connect to only ten speakers. If you already have an XB40, there really isn’t any point in upgrading to the XB41 unless you: