The SOL Amp Air are a nice to look at but not so nice to listen to. Bluetooth noise, insecure fit, and poor codec support make for a frustrating experience if you're using them for anything but running. 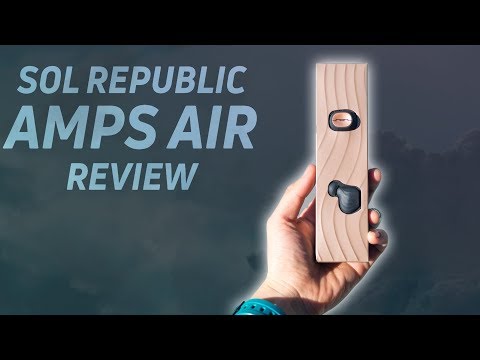 Sound Of Life, as it’s subtitled, introduced the SOL Amps Air in 2016 as a true wireless earphone that’s ready to hit the gym or the streets. The Amps Air are the reason your mother told you not to judge a book by its cover: Our rose gold version is elegant, tough, portable, and everything you could want from a pair of true wireless earbuds. Pop ‘em into sound-thirsty ear canals, however, and the Amps Air fall flat. . . or out.

Who is the SOL Republic Amps Air good for?

Those of us who don’t want to buy separate earbuds for both daily life and the gym will be interested in the SOL Amps Air true wireless earbuds. If you’re one of the following, these should be on your shortlist:

The SOL Amps Air are painted in a gorgeous rose gold tone.

Hopefully your experience won’t echo mine, as I found the included silicone tips to 1) fit poorly and 2) irritate my skin. A great, albeit pricey, option are the Comply Truly Wireless Pro memory foam tips. The material provides a comfortable, more secure fit than the included tips, and provides better isolation overall. Lightweight silicone sleeves makeup the grippy exterior of the Amps Air. Unique-looking air grooves are designed to help grip the ear and encourage a secure fit. This makes sense, like tread on a tire. Real world use proves otherwise. Running with the Amps Air was okay, but not as good as with the Jaybird X3 or Bose SoundSport Wireless. But when I stood against a railing to stretch, the right earbud did a not-so-cute thing of falling out. Thankfully, the silicone gripped the ledge to prevent a final, devastating bounce into the intramural basketball game below.

the Amps Air never feel secure. The housing constantly teeters on the verge of falling out.” qposition=”right” qcolor=”color3″] The improper fit of the earphones make them a liability, too easy to lose.

Four colorways are available with the SOL Amps Air: jet black, rose gold, rich teal, and deep blue. The latter two will turn heads—the jury is still out on if that’s a good thing or not—but the black and rose gold versions are James Bond-esque. As I mentioned earlier, the included silicone ear tips leave a lot of room for improvement. After switching to Comply tips, surprise ejections are no longer an issue. But even with the third-party tips, the Amps Air never feel secure. The housing constantly teeters on the verge of falling out.

We’ll go into the longevity of the honky-tonk, ba-donk-a-donk of a charging case later, but aesthetically it’s the right amount of inoffensive and classy. Yeah, it’s bulky. But its understated oblong, matte look will fit right into any desk setup. Actually, like the TRNDLabs Nova true wireless earbuds, the SOL Amps Air charging case is a standout feature of the ‘buds. Not only can it charge the Amps Air 15 times over, but it can also charge a smartphone. Very handy!

Interference relentlessly cuts through the SOL Amps Air connection. Even with my phone less than two feet away, the connection is unacceptable. The left or right earbud loses connection spontaneously and frequently. Walking into a room away? Good luck. You’ll be lucky to hear every third word. The SOL Amps Air produce serious lag, but that’s a common problem for buds that don’t use mainly AAC or aptX LL. For those who want to hull up and go on a Netflix binge, you’re better off with wired drugstore earbuds. They may not sound as good, but at least they won’t bother you with delayed audio.

The SOL Amps Air produce serious lag. For those who want to hull up and go on a Netflix binge, you’re better off with wired drugstore earbuds.

The rose gold SOL-branded panel on each ear piece acts as a multi-function button. A single tap of either button will play/pause music or answer a call, depending on the context. Activating Siri or Google is just as easy and will respond with a double tap of either button. The commands are limited but welcome. Though, I’m not sure why the ability to skip tracks was precluded. The pebble-inspired clamshell case glimmers in the sun like Edward Cullen.

SOL claims that a full charge will keep listeners going for three hours before having to insert the earbuds into the charging case, which allows for a total of 45+ hours of playback time. Personally, I was unable to get past 2.5 hours of playback time before needing a recharge—but your mileage may vary based on listening volume.

Naturally, using the magnetized clamshell case to charge a smartphone will drain the battery dramatically, but still, that’s some impressive stamina. Whenever the Amps Air aren’t in use, I tend to drop them back into the charging case. On a day-to-day basis, the battery life seems to be never ending, especially since I rarely top off my phone with extra juice. The overall sound is disrupted by constant hissing.

Much to my chagrin, the SOL Amps Air are plagued by their Bluetooth nature. A constant hiss permeates the sound, making for an annoying experience unless you’re preoccupied with exercising or the like. The bass-heavy signature is ideal for athletes; users can track the song by its bass, even in noisy environments.

An awesome, inclusive feature of the Amps Air is their ability to go into mono mode. It’s the same connecting process as stereo mode, but instead of pulling both earbuds from the case, just pick the appropriate one. This feature is ideal for those with reduced or complete hearing loss in one ear.

Eminem’s ‘Till I Collapse is defined by the aggressive bassline written into the song. The SOL Amps Air highlight the lows and reinforce the tenacious tone of the bass underlining Eminem’s lyrical witticisms. For general listening, this kind of bump is preferred over the Under Armour Sport Wireless Flex by JBL, which overdo the low end.

Due to the white noise pervading all sound, it’s difficult to distinguish whether the mids were masked by the bass or by the interference.

Detail is lacking in the lowest frequencies, absolutely due to the aggressive overemphasis. As I said before, detail isn’t paramount when exercising, but these aren’t exclusively workout earbuds.

Due to the Bluetooth noise pervading all sound, it’s difficult to distinguish whether the mids were masked by the bass or by the interference. In Cold War Kids’ Hospital Beds, Nathan Willett’s vocals are veiled behind static. If audio grain is to benefit any song, it’s “Hospital Beds.” The raw vocal emotion plays comically well to the interference. Multifunction controls are limited and don’t include the ability to skip tracks.

That’s not meant to excuse the poor connection quality. When you’re paying $100-plus for earphones, static shouldn’t be on the radar. Listening past the distraction, the leading F#m and C#m chords don’t sound as sharp as they should, preventing the song from eliciting feelings of saddening nostalgia.

Okay, so I’m really putting the SOL Amps Air through their paces with “Pulaski at Night” by Andrew Bird. But, hey, they look elegant; so I wanted to know if they can replicate elegant sound.

Like the mids, the minor key is blunted and rolls flatly. It’s a bad sign when I’d rather use the speaker of my LG G6 over the SOL Amps Air. My phone provides more detail and necessary attention to the highs than SOL’s earbuds. At 3:54, the solo’s pickup stumbles, as the Amps Air attempt to separate the competing treble elements. Though the Amps Air are sweat resistant, they lack an official IP rating.

I want so badly to review a true wireless unit that deserves endless praise. As the SOL Amps Air have proven, we’re just not quite there with truly wireless earbuds quite yet. The battery disguised as a carrying case is a great feature; I love that it can charge a phone on the go, but SOL isn’t marketing a charging case with earbuds. They’re focused on earbuds with a nice charging case accessory.

If you’re dead set on true wireless, the JLab Epic Air provide a more secure fit, great touch controls, and an equally bulky charging case. The SOL Amps Air may look nice, but they sure as hell don’t play nice.