If you're looking for a pair of on-ears the Skullcandy Grind Wireless have a solid battery life and build, but they don't fold. So are they worth it?

For less than $100, the Grind Wireless are a great deal if you're looking for a pair of Bluetooth on-ears. 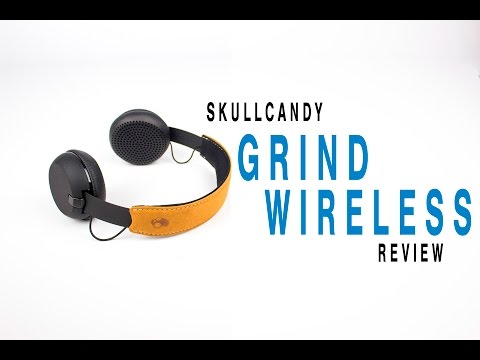 If you’ve ever seen or purchased a pair of Skullcandy headphones before you’ll recognize the familiar packaging. In the box you’ll get the headphones, a small box with the name Skullcandy on it and in that box there’s a micro USB charging cable, 3.5mm audio cable, instruction booklet, and warranty information.

The Grind wireless look very similar to their wired counterpart. They’re on-ear headphones rocking 40mm drivers that come in a few different color options. We’re looking at the black/tan option here, but you can also get them in white, black, blue, gray/plaid, and blue/brown. The ear pads don’t have a huge amount of padding but the bottom of the headband is covered in a mesh that fits great on the head. Even though these are pretty comfortable around the head, they’re not too comfortable on your actual ears after about an hour of listening. Probably due to the lack of padding. The headband can be easily adjusted to fit different sized heads, but they don’t have any hinges which means that they don’t fold. If you rely on compact form factors that can easily be thrown in your bag, these might not be the ones for you. That said, they do seem to be pretty durable and the headband is made of metal so I’m sure they can survive a trip in a backpack fairly easily. The ear cups are made of a matte plastic that can get marked up with fingerprints occasionally, but it’s not the worst we’ve seen. The left ear cup has nothing on it but the right ear cup has all of the buttons and inputs that you’ll need along the edges. The first button is shaped like a plus sign, followed by a circular multifunction button and a minus sign below that. As you might expect, the plus sign increases volume but also skips to the next track if you hold it down. The minus sign does the opposite in terms of playback, and the multifunction button pauses and plays music as well as answers and ends phone calls. Though the buttons function properly, they are made of a glossy plastic that gives them a cheap feel which doesn’t match the overall aesthetic of the headphones. On the bottom of the ear cup you’ll find the 3.5mm input and a micro USB input for charging. One decision that Skullcandy made which I really enjoy is the minimal branding. Nowhere on these headphones is the word “Skullcandy” written and the only logo you’ll find is a small skull tastefully implemented on the headband. The Grind Wireless are, well wireless. Turning them on instantly enters pairing mode and once paired, they’ll auto connect to the last used device every time you turn them on. Skullcandy claims that these have a range of about 30 feet which is fairly standard for Bluetooth. In our testing they worked great at around 30 feet even with walls in the way. We were able to push them to about 35 or 40 feet before the audio began to stutter. Call quality was average and while I was alone in the house they worked fine, but you probably wouldn’t have the best experience if you’re outdoors or in a crowded area. Battery life is estimated at around 12 hours at 75% volume and in our testing that was fairly accurate. Our first run got us around 11 hours of playback while the second run lasted 11.5 hours. It’s worth mentioning that while most people will probably use them daily at around 75% volume, we maxed it out for testing purposes.

Even though these have the option to be hardwired, we did all of our testing wirelessly. If you like bass, you’ll enjoy these. It’ not overpowering unless you turn it up to max volume (mainly because of how loud these get), but they’re definitely bass-heavy for a pair of on-ears. The low rumbling bass throughout “Kids (Keep Up)” by Childish Gambino did end up being slightly muddy but it wasn’t too bad overall. I prefer a more balanced sound but I can appreciate a heavy low end if it isn’t overdone.

The mids in these were slightly warm and songs like “Buried in Detroit” by Mike Posner benefited greatly from this. Background instruments weren’t the cleanest, but vocals came through clear enough.

As I mentioned before, these get very loud. So more often than not hi-hats and cymbals can be a little harsh and the song overall definitely benefits from a slight volume adjustment. Still, they do a good job at rolling off at the top and if it weren’t for how loud these can get, I would have no complaints. The buttons on the Skullcandy Grind Wireless are easy to press. Honestly, the Grind Wireless did a good job at changing my opinion of the company. They’re not an amazing pair of headphones by any means, but they’re definitely a solid pair of Bluetooth on-ears which is hard to come by. Audio companies have been so focused on larger over-ears or small wireless ones lately that on-ears tend to get overlooked. In fact, the last pair of true Bluetooth on-ears we tested were the AKG N60 NC’s back in February and even though these sound better, they’re also way more expensive. At the price of less than $100, it’s hard not to recommend the Grind Wireless.