Monoprice has again succeeded in making a quality bang for your buck option with the new Hi-Fi Lightweight On-Ear Headphones.

Monoprice has again exceeded expectations and made a quality product for an insanely low price. If you need something that's easy to use, and lightweight, get the Hi-Fi On-Ear. 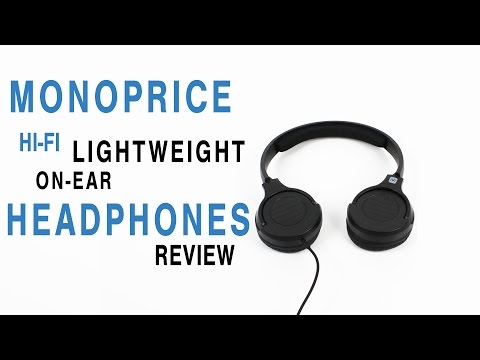 Editor’s note: this Monoprice Hi-Fi On-Ear review was updated on January 17, 2021, to update the formatting to match SoundGuys’ current standards.

Who are the Monoprice Hi-Fi On-Ear for?

What’s it like to use the Monoprice Hi-Fi On-Ear? Design-wise these are as basic as you’re going to get: all black with minimal padding. There’s a small Monoprice logo on the right ear cup and the audio cable has a one-button mic/remote that works with both iOS and Android, though with differing levels of functionality (more on that later). Overall, I really liked the design on these. Then again I’m a sucker for a low-key designs, so if you’re more the flashy headphones type these probably aren’t for you.

It’s unrealistic to expect premium build quality from a cheap headset: these are made of plastic, save for the padding at the top of the headband and on the ear cushions. Despite the cheap material, the headphones are actually quite comfortable and can even be worn for hours at a time. The ear cups are pretty small but they seal well to the ear, and block out a decent amount of background noise. You can rotate the ear cups 90°, and lay them flat on a table but they lack foldable hinges. You can’t just ball these up and toss them in your bag, but you can get away with sliding them into the laptop pouch.

How do you connect the Hi-Fi On-Ear? There’s only one way to use these and that’s by plugging them in, so long as your smartphone still has a headphone jack. The audio cable terminates at a right angle, and features a one-button mic and remote that works with both iOS and Android devices. You can even access your smart assistant directly from the multifunction button by holding it down. Only on iOS can you triple-click it to return to a previous song.

How do the Monoprice Hi-Fi On-Ear sound? These have 36mm dynamic drivers which helps make the overall size of the headphones smaller, but that doesn’t make the sound any smaller. Obviously there are better options out there in terms of sound quality, but for the price the Hi-Fi Lightweight on-ears hold their own against more expensive headphones.

We did most of the testing on smart phones since it’s doubtful that anyone will be using these for studio purposes, but we did also test them out on a Scarlett 2i2 audio interface just to be safe.

Most songs (like ROS by Mac Miller) had a surprisingly accurate low end that didn’t do much to mask high-frequency sounds like cymbal hits. Certain songs with more extreme basslines did introduce auditory masking. Listen to the song This Is How We Walk On The Moon by Jose Gonzalez to get an idea of what we’re talking about.

Though you shouldn't expect studio-quality sound with these headphones, they're perfectly fine considering their price.

The midrange frequency reproduction isn’t what shines with the Monoprice Hi-Fi On-Ear headphones, again this is most apparent during sounds with predominant bass instruments. In the song Alive With the Glory of Love by Say Anything vocals are meant to take precedence but it can be hard to parse apart the instrumental din.

Treble notes aren’t nearly as emphasized as we’re accustomed to hearing from cheap consumer headphones, but they’re still reproduced clearly and with some emphasis. In the song Re: Stacks by Bon Iver, you can hear the creak from the chair he was sitting on, which is very impressive.

Should you buy the Monoprice Hi-Fi On-Ear in 2021?

You can’t go wrong in spending a few bucks on some portable Monoprice headphones. Once these headphones are on your head they don’t feel or sound like $15 headphones, even though they might look like it at first glance. These headphones would also make a great gift for any music lovers you know.

Next: Best on-ear headphones under $100 The Monoprice Monolith M565 is something worth saving up for: this headset reproduces pleasing audio across the frequency spectrum. It uses planar magnetic drivers to make each note easy to discern, so long as you’re in a quiet environment. Vocals are reproduced with great clarity, but auditory masking does come into play at loud volume outputs.