If you're gonna take a shot at the king, you'd better not miss—and Monoprice takes aim at the high-end audiophile headphone market with the Monolith M1060.

This is the set of headphones you buy when you want to grab something that performs on-par with high-end headphones—but you don't want to spend for it. The Monolith M1060 walks the walk.

To understand the totality of this review, you must first understand Monoprice’s business model. In a word, it’s “value.” In several words, it’s “value taken to its logical extreme.”

We’ve reviewed Monoprice products before, but all of them take aim at the entry level of the market. For example, their speaker wire undercuts most of what you’ll find out there; but it offers performance that is ever-so-slightly above everything around it. It’s not really much of a secret that they haven’t been trying to unseat the highest reaches of the product categories they’re in, but that just changed.

Editor’s note: this review was updated February 22, 2019 to include test data.

When you open the box, you’ll find a carrying case, your headphones, a fabric-wrapped y-cable with a 3.5mm L-shaped jack termination and 2.5mm single channel terminations (for the headphones), and extremely little documentation.

The Monolith M1060 is a beast of a set of headphones, weighing in at 1.1lbs (500g) with enormous ear cups, mostly-metal and wood construction, and 106mm planar magnetic drivers. That’s crazy big. While this is sort of a necessary evil with planar magnetic headphones, it can be a bit jarring to first-time buyers, especially if you saw the cans on Amazon and thought they’d be a lot like the dynamic cans you’re used to. 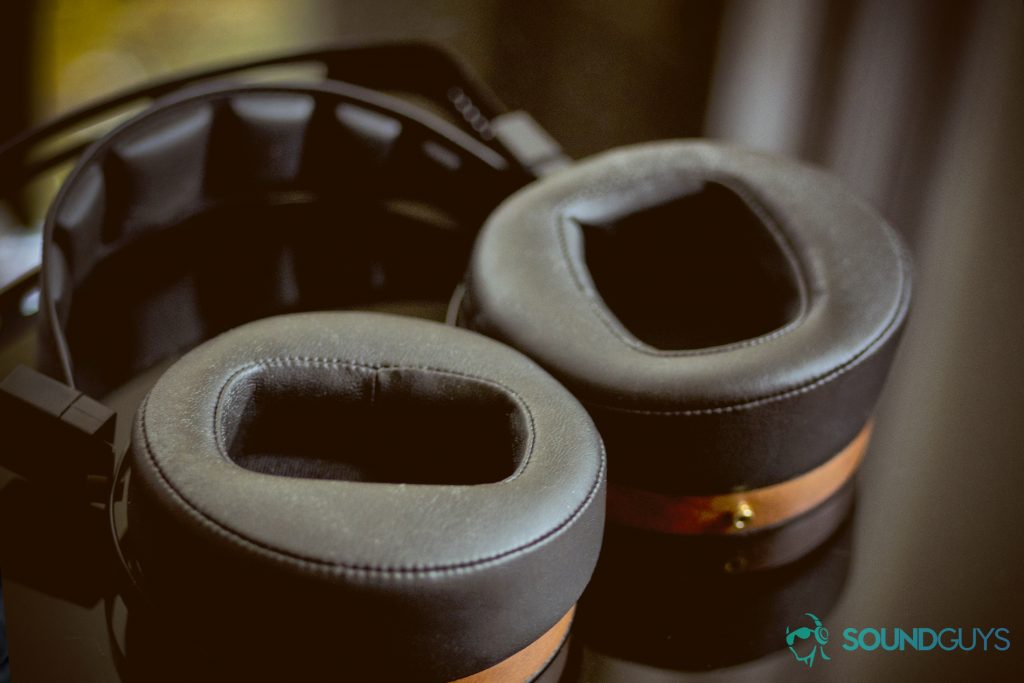 I will say that the ultra-deep and soft angled earpads do a great job of lessening the immense pressure on your head, but the sheer mass of the headphones is tough to deal with in a good way. The thinly-padded band is of a good design, but ultimately isn’t all that comfortable over long periods of time unless you make sure it’s cranked down to hug your noggin firmly. Even then, it probably could be made of another material or made a bit wider to distribute a little more weight over a greater amount of area. Still, it takes hours for the cans to become uncomfortable, and you can easily re-adjust if you get to that point.

I mention this because the Monolith M1060 is a set of headphones that have seen their fair share of revisions—so maybe that changes in the near future. Some people had a little trouble with the MMCX interconnects in the ear cups; so they were replaced by 2.5mm jacks. Others had issues with the wood cracking over time because the matte polyurethane wasn’t applied inside the earcups to properly seal the wood. Fixed. The grill was too sharp… you get the idea. Personally, I’m very impressed that these headphones have seen so many revisions in such a short time. Monoprice listened to consumers and polished their baby enough to make a complete product, and the end result speaks for itself. 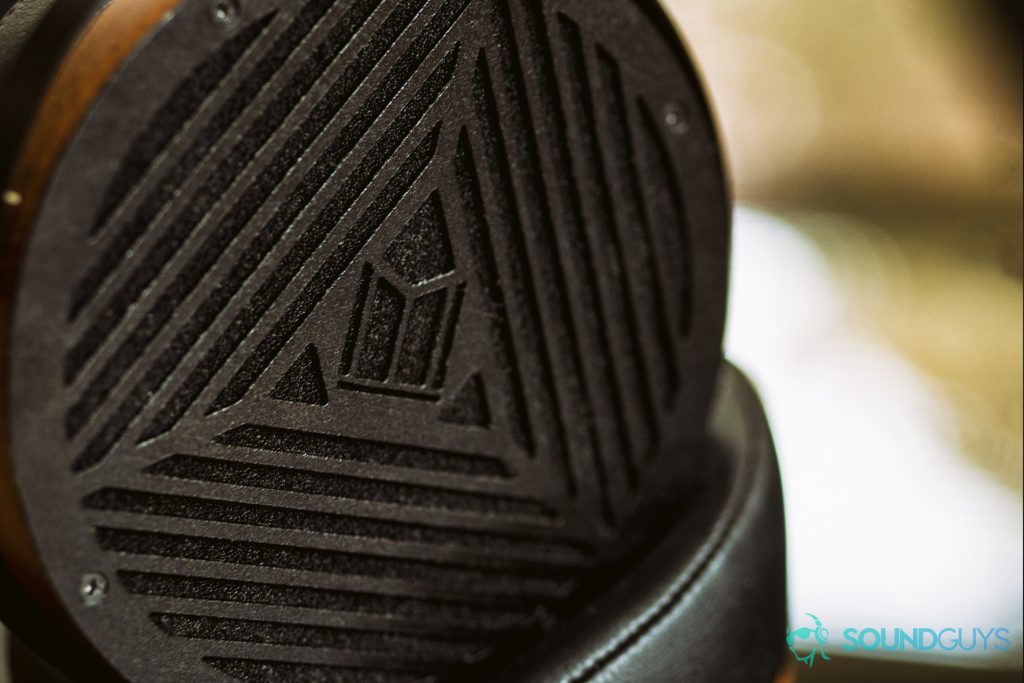 If you were to unscrew and remove the rear grill, you’d find a piece of foam that separates the driver element from the outside world. I suggest keeping this in because it prevents the inevitable foreign-object damage from frying your cans, and also so you don’t accidentally do something to your new purchase.

Like most headphones, the Monolith M1060 uses a standard 3.5mm plug to hook into your phone, amp, or whatever. On the base of each earcup lives a 2.5mm single-channel jack, so you could easily replace the cable should something happen. 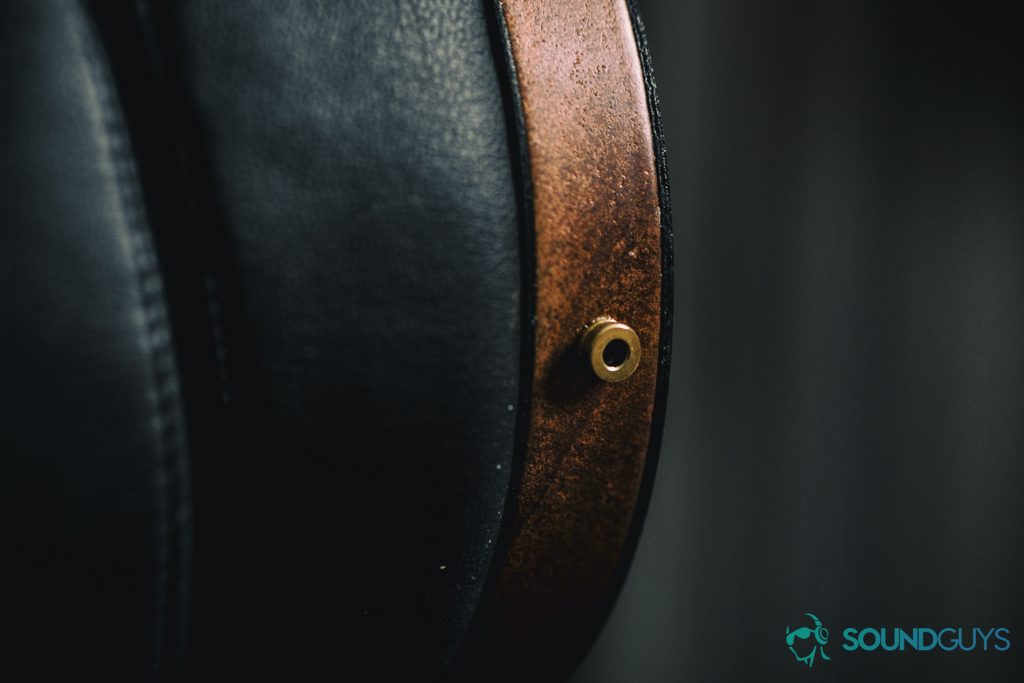 A 2.5mm female jack is a basic-yet-solid connection in each ear cup.

As far as powering these headphones go, you’ll probably be surprised to hear that an amplifier isn’t absolutely necessary. With a sensitivity of 96dB/mW and an impedance of 50Ω, most phones that we’ve tested on our sister site, AndroidAuthority, can handle these… However: a phone is a very inappropriate tool to use with these as using open-backed headphones away from a quiet environment severely clips their wings from a sound quality standpoint.

But there’s a catch; if you’re going to be listening to high-quality music, you might need a DAC for 16 or 24-bit music, and whatever DAC you choose may not offer enough juice for the M1060s to work properly. If you want to be completely sure you’re getting the most out of your headphones, you could go for a low-cost integrated DAC/amp setup. I personally recommend the FiiO E10K because it’s more than enough power and quality for less than $100, but if you think that you’ll end up buying more headphones or continue with home audio as a hobby, the absolute best performance for the money is the JDS Labs O2/ODAC integrated combo. 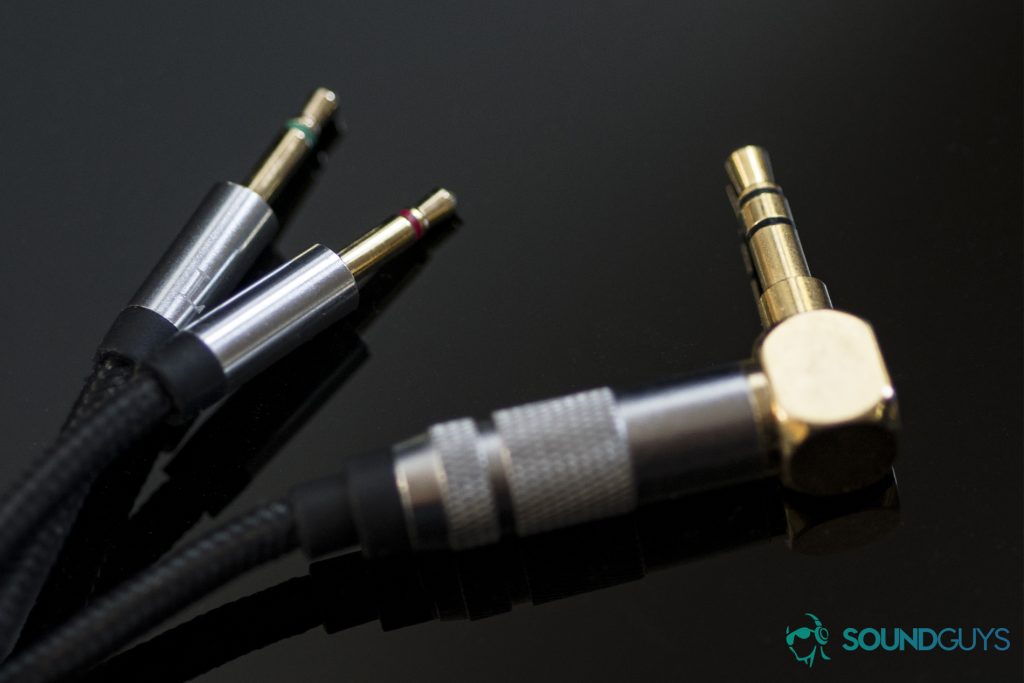 A simple 3.5mm plug is the ideal connector for high-end audio.

A lot of people disagree for various reasons surrounding taste and gadget lust, but that combo is the closest you’ll ever get to the Platonic ideal of an amp (being simply “wire + gain”). The pro-tube crowd might tell you otherwise, but that’s more enthusiast/hobby territory, and changes how your music sounds—and I say that as someone with one tattooed on his arm.

In my six plus years covering audio equipment, I’ve never heard a set of sub-$500 headphones this clear. Even old mainstays like the AKG K701 and Audio-Technica ATH-AD900—both rockstars in their own right—are mismatched against the Monolith M1060. These are, without a doubt, the highest sound quality to cost ratio in the headphone world and only the Knowledge Zenith ATE comes close. That being said, they’re not perfect, so let’s dive in. The flat line in the pink and green ranges mean your music will sound very much like it was originally mixed.

While the overall sound is fairly neutral, there’s definitely a bit of a mid bump and a few other ranges of tasteful emphasis. Really though, the deviations from a studio sound is under 10dB until you hit high harmonic sounds, so none of the changes in emphasis are things that can’t be equalized away—it’s more of an observation than an issue. So if you don’t mess with your settings, you may find yourself cranking the volume to make some highs come through, but pop-ish songs like Studio Killers’ Friday Night Gurus come through loud and clear.

Some people claim that removing the foam “opens up” these headphones, and while that is somewhat true, it does introduce the possibility of a very quiet “ringing” near 5kHz. However, given that not everybody seems to be able to hear this, it’s yet again more of an observation than a real issue. If you like how they sound with the foam in, don’t mess with it. These headphones are firmly in the territory where there are fewer objective upgrades, and a lot more competitors that offer something that’s simply different. These Monoprices aren’t going to turn pop into classical, after all.

If I were to distill how these headphones sound, it’d come down to being very “clear.” There’s no audible distortion, and there doesn’t seem to be any major channel balance issues either. Problems with mixing songs become very apparent, but it’s only in high-def files (think 320kbps plus) where it becomes audible. I’m quite pleased with how easy it is to pick out the separate stringed instruments from Samuel Barber’s rendition of Adagio for Strings, for example.

Many people compare the sound of the Monolith M1060 to that of the Audeze LCD-2, but that’s a bit unfair to both headphones—they’re in very different price brackets after all. But I will say that someone who is either over 30 or new to the equipment-as-hobby game won’t be able to reliably pick either as the “better” set of headphones. And that’s notable.

If you’re looking to break into the world of high end audio, there’s no better way to get as much bang for your buck than the Monoprice Monolith M1060—and it’ll be a while before something else takes that crown. The combination of high performance, low price, and improved durability makes for a rock-solid value purchase… as much as $299.99 can be called “value.” I didn’t expect this from Monoprice, but I suppose I should have. Despite their reputation as a purveyor of near-generic wares for less, gunning for the top end of the market is new for them—but their discipline to fix problems as they arise helped the Monolith M1060 stick around as a credible alternative to the ever-increasing crowd of planar magnetic headphones.

These are a fantastic buy for anyone looking to get as much audio quality as they can for $300 or less. While there are several HiFiMan planar magnetic options below $400, they don’t quite go toe to toe with the M1060 in any category but comfort.