Though there are plenty of things I don't like about the Style-S, I can't help but love the thing. It has a fun sound perfect for the kitchen or the beach and thanks to a great connection strength and durable build it doesn't seem out of place in either. 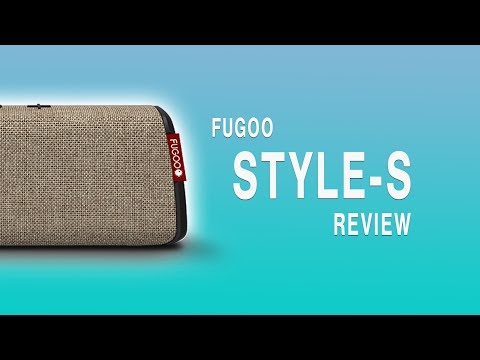 The speaker doesn’t actually come in a box, instead it comes in a plastic covering attached to a piece of cardboard like a new toy car. When you open it up you get the speaker, a power brick, micro USB charging cable, and the warranty information and instruction booklet.

At first glance the Style-S looks very similar to the previous Style, but there are a few key differences. Fugoo tried to make this speaker one that you would want to bring with you everywhere. Gone are the interchangeable jackets, instead you’ll find a hemp-like cover that’s been reinforced with fibers in its place. It’s IP67 certified so you can do things like take it out kayaking with you and not have to worry about any water damage. As long as it’s only 3 feet deep and no more than 30 minutes.

There’s also a new mounting system on the bottom that will allow you to attach the speaker to everything from a tree to a bike. Of course you’ll have to purchase the mounting plates separately, but as the most expensive of them is only $20 it seems like a fair deal if you really want to mount the speaker. Up top you’ll find three buttons (+, o, -) for controlling playback, while the power and Bluetooth pairing buttons are off-loaded to the side of the speaker. On the other side is a small rubber flap that keeps water out of the micro USB port, further protecting the speaker against water.

One thing to take note of if you’re considering this speaker is that the dual full-range 47mm drivers are directional, so if you’re looking for something that can play music in 360-degrees you’re out of luck. That said, once you position the speaker correctly so that it plays directly to you it gets pretty loud which is useful if you’re actually going to be using this outside.

As far as connection goes I had few, if any issues with playback. Fugoo claims a range of 100 feet and I can’t dispute that. It played pretty much perfectly anywhere in my apartment and only began to stutter when I was specifically testing the range. There was only one time where the speaker was about 10 feet away from me and the music stuttered for a split second, but it hasn’t happened since no matter how many times I try to recreate the conditions so I have to conclude that it was a fluke.

Playback controls also work well enough with the plus and minus sign controlling volume and the center button acting as a multifunction button. It pauses and plays music, answers and ends phone calls, and if you hold it down you can access your phone’s voice assistant. You can also skip between tracks by pressing the multifunction button as well as one of the volume buttons, depending whether you want to skip to the next song or skip backwards.

Another new feature Fugoo threw in is the ability to sync up two Style-S speakers to one source device. You can choose to double the sound or turn them into left and right channels for stereo.

Fugoo claims that the battery in the Style-S can last up to 15 hours, which is unfortunately significantly less than the 40 hours of the previous Style speaker. Even more of a step backwards is that in my testing I wasn’t able to actually reach 15 hours of playback. In my runs I got about 13 hours of constant playback on about 70% volume.

Sound quality over Bluetooth has come a long way since the original Fugoo Style, and this speaker keeps up with the changes sounding just as good as most other speakers in the sub-$200 price range. The problem is that it doesn’t surpass them in any meaningful way. The low end is just as strong as something like the Flip 4, but also just as clean. For another $50 I was expecting a little more polish on the bass notes of something like “There’s Something Special” by Pharrell. They’re strong but almost a little hollow at times and it even distorts at high volumes during the song “Strong Than Me” by Amy Winehouse.

On the bright side mids are super clean. I was almost able to understand what Post Malone was saying in the song “Congratulations”. Almost. His vocals seem to just be perfectly placed above the madness of the 808 hits throughout the song. Similarly, I didn’t have any real complaints with the high end most of the time. The finger slides in the intro of “Just The Two Of Us” by Cyrille Aimee maintain their detail and emotion without ever becoming squeakily harsh. Let’s get something out of the way. It’s hard to make a perfect speaker, and the Fugoo Style-S is far from perfect. The battery life is below average and a huge step down from the 40 hours of the old Style. Sure, this new Style-S is durable but it’s also not small enough to be truly portable in my opinion. That honor goes to something like the cylindrical Flip 4 or UE Boom 2. But despite all of the things I don’t like about the Style-S, I can’t help but love the thing. It has a fun sound perfect for the kitchen or the beach and thanks to a great connection strength and durable build it doesn’t seem out of place in either scenario.

There’s something about the fabric and design that appeals to me in a way that I think matches up perfectly with it’s sound quality. The Style-S is a simple and almost minimal product. No real bells and whistles, but still effective at what it does thanks to a strong connection strength. It’s a practical speaker made for people who just want to play music anywhere, which makes it pretty easy to recommend if you like simple like I do.

Fugoo Style-S
8.4
SHOCKPROOF / WATERPROOF BLUETOOTH SPEAKER - IT FLOATS / IP67 CERTIFIED - Made from polycarbonate and glass fiber, this bluetooth speaker has a dust proof and waterproof structure that can withstand up to 1 meter of submersion in water for 30 minutes. It can also withstand impact from a 6 feet drop. LONG LASTING BATTERY LIFE - This portable bluetooth speaker has a built-in Lithium-ion battery that is rechargeable through the USB charge cable. This speaker lets you play continuous music up to 15 hours at 50% loudness with the battery saver equalizer. DESIGNED FOR INDOOR /OUTDOORS - This portable bluetooth speaker has a sleek design that makes for an elegant structure. This speaker has excellent bass and treble tones. It is designed to deliver full and crisp sound quality – making it the ideal speaker for outdoor or indoor use.