You'll need to approach it more like an advanced boombox rather than a portable Bluetooth speaker, but the audio quality alone makes the Fluance Fi50 easily worth the price.

No battery power
Not exactly super-portable

You'll need to approach this more like an advanced boombox rather than a portable Bluetooth speaker, but the audio quality makes it easily worth the price. 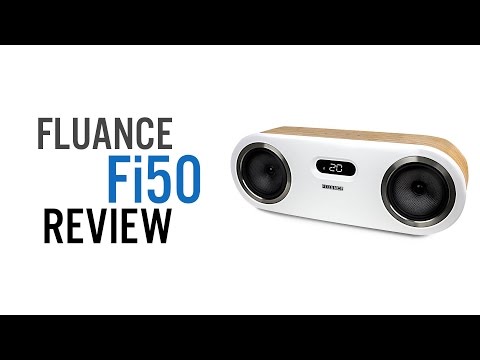 Earlier this year, we had the chance to review the Fluance Fi30. It was slightly bare bones — no onboard controls, no battery — but it was good at what it did, and the sound was good for the price. When we saw that the company had a bigger (and hopefully better) version of the speaker available in the Fluance Fi50, we knew we had to take a look.

The asking price is $50 more than the Fi30, but not only is the speaker bigger and louder, it includes built-in controls and an LED display for better visual feedback. It sounds good on paper, but does the Fi50 actually deliver? Absolutely. The Fluance Fi50 comes in a relatively nondescript brown cardboard box, completely unlike most of the speakers we get in that make packaging a major priority. Open up the box and you’ll find the speaker and manual together, while an accessories box sits on the side. Inside this box you’ll spot the AC adapter and power cable, 3.5 mm audio cable, and optional metal cleats and rubber feet for the bottom of the speaker.

Like the Fi30, the Fi50 comes in three finish options. Unlike that speaker, all of them show off that the speaker is made of wood. We’re looking at the Fi50 in Lucky Bamboo, but it’s also available in Black Ash and Natural Walnut. No matter which finish you choose, the speaker is constructed using the same MDF, so don’t expect any difference in sound across finishes. The size of the speaker is probably all the indication you need, but in case you hadn’t guessed, this speaker is on the heavy side: 13.4 pounds to be exact. This isn’t meant to be a portable speaker like the Bose SoundLink 3 or UE BOOM, and Fluance embraces this, right down to the metal cleats included in the box.

Overall the Fi50 has a nice look, though the vaguely retro aesthetic won’t be for everyone. For my part, I like the look as much here as I did in the Fi30. Here it’s even better thanks to the LED on the front of the speaker which, along with the newly added controls, adds some much-needed interactivity.

The Fluance Fi50 uses Bluetooth 2.1 + EDR, which can be off-putting to some, even though the companies using the older standard stress that no audio benefits are found in the newer versions. Since the Fi50 is AC power-only and has no battery, none of the power-saving benefits possibly offered by newer Bluetooth versions are an issue here either.

Pairing is as simple as turning the speaker on — in fact, there’s no option to manually enter pairing mode as with many speakers. Instead, the Fi50 has a “reset pairing” button on the back, just as the Fi30 did. Range is the standard 33 feet, and a 3.5 mm jack is provided on the back of the speaker if you’d prefer to plug in.

Looking at the buttons, a power button joins the pairing reset button on the back, but unlike the Fi30 that’s not all there is here. A touch panel on top provides volume buttons, a button to adjust the brightness of the LED, and a selector button that allows you to dial in bass and treble EQ settings to your liking. Playback controls would have been nice, but for the price, we’re not complaining.

No speakerphone functionality is provided, so no controls are needed for that, though it’s hard to imagine many people using a speaker like this for calls regularly. While the Fi50 doesn’t have a battery, it does offer a 2.1A USB port on the back for charging mobile devices.

Given the sheer size difference between the Fluance Fi50 and the Fi30 we reviewed earlier, we were expecting two things: more bass and more volume. Just as we assumed, we got both. We’re looking at a 40-watt amplifier here rather than the 6 watts per channel found in the Fi30, with glass fiber drivers up front and two bass ports in the rear. While the Fi30 only extended down to 65 Hz, the Fi50 reaches down to 40 Hz. The difference is clear whether you’re listening to bass-heavy hip-hop or rock, but the more the music pumps out the lows, the more you’ll feel it. The bass on Camper Van Beethoven’s “Classy Dames and Able Gents” is rich and full without stomping all over the strings and vocals.

There is a nice body to the midrange, and it generally sounds more balanced than the Fi30, since the mids don’t need to make up for the lack of lows as much. Still, the same wide-open character we liked in that speaker is here. Percussion detail on Stephen Malkmus’ “The Hook” that often goes unnoticed on many speakers translated nicely here.

The highs are backed off slightly to ward off harshness, but nowhere near as aggressively as we’ve seen in some other speakers. There seems to be slightly more detail in the highs here than the Fi30, but the difference isn’t huge. Given the still relatively small size of this speaker, stereo separation is surprisingly good. Sitting with the speaker behind me as I took notes, a few spatial cues had me looking over my shoulder, which isn’t something we often encounter in speakers. One of the bonuses of the Fluance Fi50 sacrificing portability is that it can get seriously loud. You might not be able to fill an entire house with sound, but if you’re looking for a speaker to provide the heart of a party, this will get the job done. It still isn’t for everyone, but some of the negative aspects of the Fi30 (AC power only, for example) are more forgivable in the Fi50 due to its larger size and better feature set. Think of it less as a portable Bluetooth speaker, and more like the modern equivalent of the classic boombox — only with more connectivity and much better sound — and you’re on track.

For $50 more than the Fi30, the Fluance Fi50 is the clear winner, unless you really want something smaller. For everyone else, the bigger volume, better bass, and onboard controls are well worth the extra cash. This isn’t quite the same do-everything speaker that the Wren V5US is, but considering it costs a fraction of the price, this is a fine budget alternative, especially if you don’t need a multi-room setup.