It isn't cheap, but the Bose SoundLink Mini is an excellent-sounding Bluetooth speaker that is especially useful for those who travel frequently.

On the pricey side
No speakerphone

Though the Bose SoundLink Mini does share a few of the problems that all speakers in this class share, it’s a seriously impressive speaker all the same. The sound quality is excellent and the build quality is far and away the best I’ve seen yet in this type of product. At $199 it isn’t exactly cheap, but the combination of great sound and a solid build make it well worth it for the music listener. If you find yourself on the road a lot, or even if you don’t, the SoundLink Mini is definitely a top contender. 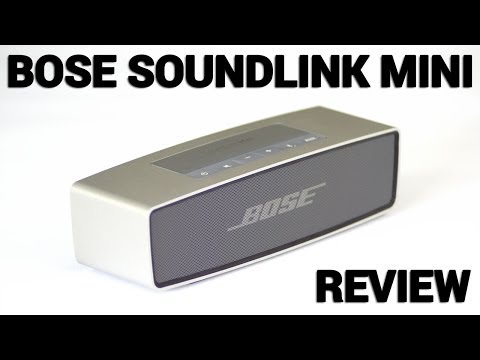 For some people, music is more than just something they enjoy; it’s absolutely essential. Everything they do is accompanied and enhanced by music, providing a soundtrack to their entire life. For most of these people, headphones are the delivery method of choice. Some, however, prefer music to fill the whole room.

When you’re at home with your stereo, this is easy. On the go, it’s a little more difficult. That’s where the Bluetooth speaker comes in. There are tons of them out there, ranging from affordable to expensive, from awful to awesome. The Bose SoundLink Mini has excellent build quality, is super-portable, and has the sound quality that Bose is known for. But is it more than just the sum of its parts? Let’s take a look.

Looking over the Bose SoundLink Mini, it’s pretty stylish to look at, and the build quality is excellent. The speaker body is made of aluminum, so unlike a lot of Bluetooth speakers, the weight is substantial. This keeps it from easily being pushed off of a table or desk, but it does also make for extra weight if you’re carrying it with you while traveling. Though I knew that it was the smallest speaker available from Bose, I was still surprised to see how small it was, especially given the sound that comes out of it, but we’ll get to that later.

The speaker can be plugged in directly, or you can plug the wall charger into the cradle and set the speaker on the cradle to charge it. If you’re using the SoundLink Mini at home and find yourself carrying it around to different rooms fairly often, the second option is probably the best. If you always just leave the speaker at your desk, it’s probably easier just to leave it plugged into the wall charger.

If you don’t want to use Bluetooth, the Bose also has a 1/8″ auxiliary jack on just about the DC jack on the right side, allowing you to plug your phone or any other device in directly. Interesting enough, the SoundLink Mini also has a USB jack on the bottom. At first I wondered why this was there, but this allows the firmware to be updated to support new Bluetooth specs and features down the road.

One admittedly minor thing to be aware of here is that the Bose SoundLink Mini can only be used for music, podcasts and other audio content. What it can’t do is be used for speakerphone. This isn’t an issue for a lot of people, but if you require something that can be used for calls, you’ll have to look elsewhere.

I briefly mentioned this earlier, but I’m still in awe of just how loud the SoundLink Mini is capable of getting, especially considering how small it was. You’re not going to haul this along with you and DJ at a party, but if you and a few friends are listening to music or you’re on your own, it’s hard to imagine needing more volume than this speaker is capable of providing. All this volume doesn’t have an adverse effect on the sound, either. I was able to push the Bose to very high volume levels without any noticeable breakup or distortion in the music.

When it comes to frequencies, the Bose SoundLink Mini shines the most at the higher end of the spectrum. Highs were very clear and bright, without any of the high frequency rolloff that I’ve noticed on other, cheaper Bluetooth speakers. The midrange was also very well represented. How important this is depends on the kind of music, but for guitar-heavy rock music, or really anything that uses guitar or piano, this is very nice. Despite the booming sound, vocals never seemed buried.

When it comes to bass, the Bose SoundLink Mini has its advantages and disadvantages. First, we’ll start with the good. Unlike some Bluetooth speakers, this speaker doesn’t rely on being set on a table or other surface to produce its bass. You can hold the Bose above your head and it’s just as bass-heavy as when it’s sitting on your desk. On the bad side, it suffers from the same problem all Bluetooth speakers suffer from: it’s hard to decently reproduce bass in such a small speaker.

Like all Bose speakers, the SoundLink Mini “fakes” its big sound in a way, by using a large chamber inside the speaker enclosure. While this produces impressive sound, it still can’t reproduce very low frequencies as well as a larger woofer or subwoofer would. While the Bose SoundLink Mini does provide a nice low rumble, these aren’t very clearly defined and music where a lot is happening at the lower end of the spectrum will slightly suffer as a result. Again, this is a problem in all speakers of this size, and the Bose SoundLink Mini performs significantly better than most of its competition, but it is worth keeping in mind.

Finally, again because of the small size of the speaker, there is little to no stereo spread unless you’re very close to it. Stand far enough away from even the biggest speaker system, and its sound will effectively be mono. The same is true here, but because of the small size of the Bose SoundLink Mini, standing even a few feet away will minimize any stereo effects. Once again, this is present in every speaker of this type, and once again, this particular speaker is much better than much of its competition when it comes to this.

Though the Bose SoundLink Mini does share a few of the problems that all speakers in this class share, it’s a seriously impressive speaker all the same. The sound quality is excellent and the build quality is far and away the best I’ve seen yet in this type of product. At $199 it isn’t exactly cheap, but the combination of great sound and a solid build make it well worth it for the music listener. If you find yourself on the road a lot, or even if you don’t, the SoundLink Mini is definitely a top contender.

Have you heard the Bose SoundLink Mini in action? What do you think of it?