The Bose SoundLink 3 surpasses its predecessor in nearly every way, but the price tag might put it out of reach for some music lovers.

Only charges via AC adapter
Pricey

The Bose SoundLink 3 is indeed better than the speaker that preceded it in nearly every way. It sounds better, is louder, and has drastically improved battery life. Still, the price of $299 may be a bit high for certain people, especially when the older SoundLink 2 and SoundLink Mini still offer high-quality sound at a lower price point 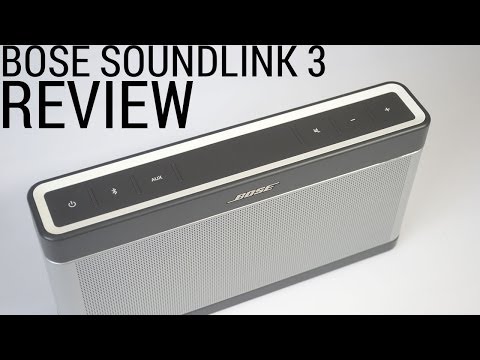 For a long time, filling a room with sound meant one thing: you had paid a lot of money and spent a lot of time setting up a stereo system. Then Bose came along and changed part of the equation. Yes, you still paid a lot of money, especially for the earliest Bose systems, but suddenly you could get room-filling sound without the enormous footprint that most stereo systems demanded.

Years later, when Bluetooth speakers first started hitting the market, they weren’t very good. They were handy, yes, but sound quality wasn’t the best. Again, Bose has done a great job of packing big sound into a small package, and the Bose SoundLink 3 is the next evolution of their Bluetooth speaker line. The question, however, remains: is the SoundLink 3 a big enough upgrade to justify replacing your existing speaker? Let’s find out. The Bose SoundLink 3 is packaged fairly simply, and there really isn’t all that much here. Opening the box, you’ll find the speaker itself and the wall charger. Aside from the quick start guide and a few other pieces of paper, that’s all there is.

Unlike the SoundLink 2, which had a very 1970s transistor radio look, the SoundLink 3 looks undeniably modern. It has lost a certain amount of personality in the process though, as now it looks a bit more similar to a lot of other Bluetooth speakers on the market. The wraparound metal grille adds a bit of flair, but it looks more like faux-metal plastic, especially from afar. There is considerable weight to the SoundLink 3, which isn’t a surprise considering the materials that make it up. This has its various pros and cons. The solid, weighty feeling definitely makes the speaker feel more durable, and it’s certainly less likely to slide off your desk, table or whatever surface it’s on. On the downside, if you plan to carry your SoundLink 3 with you often, that extra weight in your bag may become problematic after a while.

In another step away from the SoundLink 2, the SoundLink 3 doesn’t have a built-in grille cover, though there is a cover available in a range of colors. This is sold separately, and will cost you around $35. If you plan to move your SoundLink 3 around a lot, you may want to consider the cover to protect your investment. Though Bluetooth is supposed to make life easy, it’s surprising how often it just doesn’t seem to want to work at all. This isn’t the case with the Bose SoundLink 3. As soon as you hit the power button, the speaker starts broadcasting its presence to any device that would like to pair with it. In my testing this was always a quick and painless process. There was one instance where my Moto X took around 20 seconds to successfully pair, and that was the longest wait I had during testing. In testing the range, I simple started playing the speaker and walked about 35 feet down a hallway (this was the maximum straight line distance I could get in my house). At this distance, the audio still played clearly without skips or hiccups, and I was able to change volume without any trouble. Putting two walls in the way didn’t do anything to change this — it still worked without issue.

If you don’t want to or can’t use Bluetooth, there is a 3.5 mm auxiliary jack on the back of the speaker. Simply plug in your device of choice, hit the AUX button on top of the speaker, and you’re able to play your music straight over the cable — no Bluetooth necessary.

Bose claims up to 14 hours of battery life for the SoundLink 3, which is twice the length of its predecessor. In my testing, they seem to be very close here. I allowed the speaker to play all day, turning it off after about 12 hours, and it hadn’t given up. Charge time is only 3 hours, and given that it will allow for more than four times that amount of music playback, that’s not a bad deal. The one minor negative here is that the wall charger is necessary. There is no option to charge via USB. There is a USB port on the bottom of the device, but this is for service and firmware updates, not charging.

In testing the sound quality of the Bose SoundLink 3, I played music in two different ways. First, I used the headphone output of a Focusrite Saffire Pro 40 into the auxiliary jack, then I used the Bluetooth playback that most people will be using with this speaker. There was no audible difference between the two. For music, I played a wide variety: rock, punk, hip hop, indie rock, jazz, mellow acoustic music, metal and electronica were all on the playlist. The SoundLink 3 puts a heavy emphasis on bass, more so than other Bluetooth speakers I’ve heard from Bose. Even songs that weren’t particularly bass-heavy came thumping through the air. Given the size of the SoundLink 3, the bass isn’t going to shake the walls, but it’s still surprising how much bass comes out of such a small speaker. There is a port on the back (as with most Bose speakers I’ve seen) and putting the SoundLink 3 near a wall will use this port to boost the bass further.

The emphasis on low end causes the lower range of the mids (around 500–600 Hz) to be somewhat boomy. As soon as you move out of this range, the mids are much more even. They certainly aren’t hyped at all, and the typical mid-heavy “boxy” sound typical of many Bluetooth speakers isn’t present here.

Expecting good stereo separation out of a speaker this size isn’t something most people would do, as it’s pretty much impossible, unless your head is less than 3 feet away. Bose uses a bit of trickery to make the sound generally seem “wider,” and it does, but listening carefully shows that it’s tough to pick out differences between left and right. Again, this is expected of a speaker this size.

One last thing worth mentioning is that these speakers get LOUD. They also seem to have a few loud zones, so if you’re using these in a hotel room, for example, walk around the room a bit to make sure you won’t be driving your neighbors crazy.

The Bose SoundLink 3 is indeed better than the speaker that preceded it in nearly every way. It sounds better, is louder, and has drastically improved battery life. Even in areas where it doesn’t surpass earlier Bose speakers, it certainly matches them evenly. Especially as far as competitors to Bose are concerned, this is now the speaker to beat.

With that said, the price of $299 may be a bit high for certain people, especially when the older SoundLink 2 and SoundLink Mini still offer high-quality sound at a lower price point (roughly $269 and $199 respectively). If you’re looking for the best Bluetooth speaker available from Bose, however, this is it.

Have you used the SoundLink 3, or another speaker in the Bose SoundLink series? What are your thoughts?