Everything you love, plus Bluetooth

For the money, the Audioengine HD3's are hard to beat if you're looking for a good pair of speakers for your desk or bookshelf. 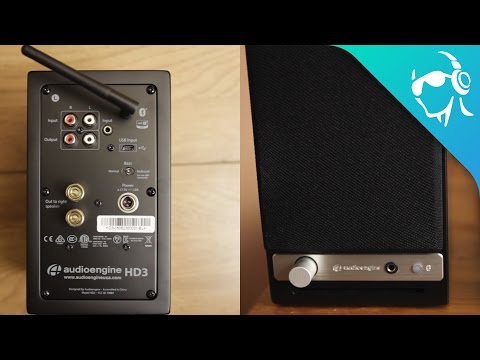 Audioengine became staples on desks everywhere with the A2+ and A5+ speakers. The quality you get for the price is just hard to beat. They’ve released a few products this year but the one that caught our eye was the HD3 speakers. They promise to take everything we loved about Audioengine and add Bluetooth functionality to it. So how do they work? Or are they a confusing mess that should Audioengine should’ve skipped over? In the box you’ll get the speakers, the power supply, a mini jack audio cable, speaker cable, USB cable, Bluetooth antennae, and the information and instruction booklets. If you’re familiar with Audioengine (or desktop speakers in general), the design shouldn’t come as too much of a shock. The HD3’s are small wood boxes standing about 7 inches. They’re the perfect size for your desktop or bookshelf and the wood finish really helps them blend into almost any part of my house. We’re looking at them in black, but they also come in cherry and walnut wood. On the front of the speaker you’ll find a 2.75” woofer and a 3/4” tweeter, both of which can be protected by snapping on the mesh grill which attaches magnetically. Each of these speakers is 30W, so overall you’re looking at a 60W setup weighing about 9 pounds for the pair.

Build quality overall is what we’ve come to expect from the company. They might be rugged and waterproof, but that’s not their purpose. For a pair of indoor speakers, these minimal blocks of sound are gorgeous. Especially when you make sure to hide all of the wires during setup. The metal volume knob feels great and is as smooth as can be when controlling volume. Audioengine has some great desktop speakers already, so why did they bother making the HD3’s? And why should you get them? Easy. Bluetooth. These can connect to your phone or tablet with ease and has aptX for high quality streaming. Of course, the main purpose of a pair of speakers like this is probably going to be for your desk or home audio setup, but having the option to switch to Bluetooth and maintain that high quality sound is a handy feature to have. You can connect to a computer via USB, or to other audio equipment with the stereo input and outputs. There’s also a small switch that reduces the bass in the HD3’s if you decide to hook up an external subwoofer for a little more low end. As far as range goes the tiny antenna does it job, letting you stream up to 100 feet away with nothing in the way. With a few walls in the way I was able to get to about 50 feet before stuttering occurred, which is more than fine for me. One thing that I found to be very impressive was how easily you can switch back and forth between sources. Switching between being connected via Bluetooth on my phone to my computer which was hardwired, was seamless and not hard at all. Audioengine got it down perfectly.

Though these will probably get most of their use connected to a computer, that’s not the main new feature that we thought deserved to be tested. So we did most of our testing while connected via Bluetooth to phones, tablets, and computers. The low end was surprisingly strong in my opinion. On moderate volume I could feel my desk slightly vibrating, and on high volume I could feel the air being pushed out. That said, it only became overbearing when on max volume which you probably shouldn’t do anyway. Still if you do, it’s good that there’s a bass reduction switch on the back because that does make it way easier to manage. This was most noticeable in the song “Hannah” by Freelance Whales which, between the fuzzy basslines and emphatic bass kicks, has a lot going on in the low end.

Vocals and instruments that land in the mid-range sounded clear with plenty of detail. I fell in love with Rihanna’s vocals in “Consideration” all over again but all of the background elements sounded just as nice.

Highs definitely weren’t as detailed as I was expecting, but they’re still better than most other Bluetooth speakers we’ve reviewed just because of the dedicated tweeters (which isn’t entirely fair I guess since these are more desktop than portable). The tambourine in “New Slang” by The Shins stayed present and airy throughout the entire song and the pick scratching against the guitar adds a nice rhythmic balance to the sound. At $399, the HD3’s cost just as much as the great HD5+’s but are easily worth the money. The added Bluetooth functionality might not be your main priority when it comes to bookshelf speakers like these, but having the added functionality is always better than not having it. In this wireless future we’re heading towards, there’s really no reason to NOT get these if you’re looking to embellish your desk with a future-proof pair of speakers. Of course there are plenty of other options for high end listening experiences and though I know $400 isn’t cheap, I wouldn’t exactly consider these “premium” either. Not when you can easily spend thousands on speakers for something like a studio. For the price, these are a great addition to any setup that doesn’t already have a great pair of speakers.

What side should the passive speaker be on?

The passive speaker should be on the right side.

Can I connect my TV to the Audioengine HD3?

Yes! Just be sure to use an RCA cable from your TV's output, or connect your TV to the Audioengine HD3 via Bluetooth. Be sure you know how to enter it into pairing mode first before throwing in the towel.