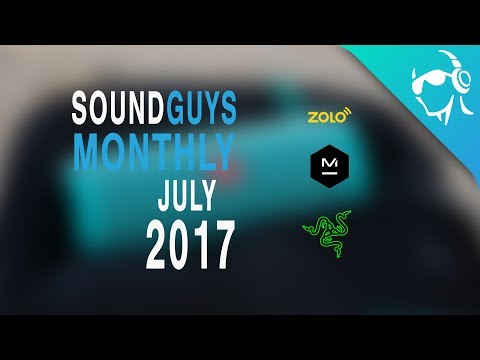 There wasn’t tons of news in audio in June, but the announcements that were made were really interesting. We also got a chance to review a bunch of gear over the last 30 days so let’s get into it shall we? This is Sound Guys Monthly. Of course the news that took my timeline by storm this week were the Liberty+ truly wireless earbuds that are being released by Zolo, Anker’s new smart audio brand. The Liberty+ ‘buds are truly wireless like the Airpods, Jabra Sport Elite’s, and others. But they’re also not that expensive coming in at only $149 MSRP. They have graphene-coated drivers that are supposed to be able to provide better sound than other wireless competitors, a 3.5 hour battery life with a charging case that extends that to 48 hours, and also full compatibility with Siri, the Google Assistant, and even Alexa. They’ve already destroyed their Kickstarter goal and they still have 22 days to go at the time of this post. So E3 happened last month, and at the show Razer announced two new headsets – kind of. The new Thresher headsets come in two models: one for Xbox and one for PS4. Both of which will be compatible with PC. But what makes these newsworthy is that they have with Dolby 7.1 surround sound. You’ll get a connection up to 40 feet away from the base station and a battery life of up to 16 hours. If you want a pair you can preorder them now for $249. It seems like Master & Dynamic are always up to something, and this time that comes in the form of a collab with Bamford Watch Department. These are a limited edition version of the MW60 headphones we reviewed. If you weren’t a fan of the modern color scheme they launched with and wanted a bit more flair, maybe this’ll do it for you. These are the same headphones with a new black and pastel blue color scheme. It’s July now which means it’s hot for most of us here in the states. No better time to go outside and enjoy some of the nice weather with some tunes. We took a fresh look at what some of the best waterproof Bluetooth speakers, and we think you should definitely check it out. Whether you have a big budget or not this list should have you covered with a speaker you can enjoy oceanside We reviewed a few things in June, the best of which had to be the Thinksound On2 Wooden headphones. Our own Chris Thomas reviewed these and got some great shots of them out in nature, but he really took a liking to them. If you’re not fond of having something in your ears and don’t like the hulking massive over-ear headphones that dominate the market, these on-ears meet in the middle with a good sound and increased portability. Our bang for your buck pick this month has to go to the JBL Flip 4, the newest in the Flip line of speakers. Add that to the list of sub-$100 IPX7 waterproof Bluetooth speakers that you might want to get your hands on. Like the Flip 3 before it it has a really good sound, exposed passive bass radiators, and good connection strength. But now that you can submerge it, it’s the perfect companion for the beach or pool.