If you want as many features as one can pack into a pair of headphones, the Plantronics Backbeat Pro+ should be at the top of your list.

Too many controls
Bulky
Average ANC

If you're looking for the headphones with the most features packed in, these are them. 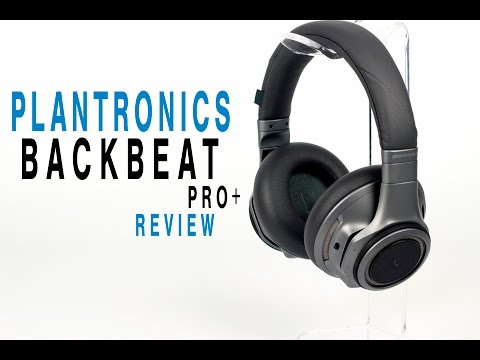 A little more than a year ago we reviewed the Plantronics BackBeat Pro and while we weren’t blown away, there was no arguing that they were a good pair of headphones. Now there’s a new version of the headphones with a plus sign at the end of the name, but what else is different about these headphones? Is the ANC any better? Is the connection stronger now? When you open the box you’ll get a carrying case, the headphones, a micro USB cable, 3.5mm audio cable, USB dongle for high quality streaming, and the quick start guide and warranty information which I actually ended up referring to a lot.

One thing you might notice is that these look very similar to the original Backbeat Pro. Like, very similar. If it weren’t for a few of the colors being different they would be pretty much identical. The build is still pretty solid being made with a hard plastic, but that means they’re still pretty heavy as well. As was the case with originals, they’re just heavy enough that you’ll be aware of the giant headphones you’re wearing. The padding gets the job done but it’s not going to blow your mind in terms of comfort. These also feel fairly durable and I didn’t have a problem tossing them in my backpack during commutes, but they do take up a lot of space. The ear cups rotate which makes it easy to slide them into the included carrying pouch, but they still don’t fold down so if you’re planning to use these for commuting that’s something to keep in mind. I didn’t really like the way that the original ones looked, and I’m not a big fan of these either. There’s nothing wrong with it, but there’s so many buttons and knobs packed into them that it almost hinders the headphones. Many times when I was trying to adjust the headphones or if I would lean my head on something, a button or knob would get activated pausing the music or skipping the track.

Plantronics made sure there were multiple ways to connect to the Backbeat Pro+. You can connect in the regular way with Bluetooth, NFC if you have a compatible device, to the USB dongle if you plug it into a computer, or with a standard 3.5mm audio cable if you have an older device. They also make it a point to say that they have an extended range of more than 300 feet, and we were eager to try it out. After plugging in the USB dongle to my computer and connecting the headphones to it, it was clear that they ween’t bluffing. Regardless of where I went in my house I had crystal clear music with no skips. Watching some videos on YouTube I also noticed there was no delay when people would speak. One thing to note was that the ability to turn the left knob and change tracks appeared to be disabled here, but turning the right knob for volume still worked fine. Once you switch back to a mobile device you can again change tracks with the left ear knob and everything seems to work fine. I did have an issue for a day or two where none of the controls worked besides volume and the only way to get it to work again was to plug in the headphones to the computer and use the Plantronics software updated to update the firmware on the headphones. It was a smooth process once you learn what needs to be done, but it took a good amount of digging through the included booklet to figure it out and I just wish that information was more readily available.

Using just my phone as my source device while commuting, the connection was great and literally didn’t skip once. So kudos to Plantronics for making the connection more reliable, even if there was some slight oversight on the rest of the stuff. The microphone was also crystal clear while talking on the phone and people on the other end didn’t even question whether or not I was actually using my phone. Plantronics claims a battery life of 24 hours and we got really close to that at about 23 and that’s with active noise cancelling (ANC). Still, the battery is really good and unless you leave it playing overnight like I did, you probably won’t run into any issues. You can also turn off the ANC and make it last quite a bit longer with only Bluetooth. The headphones also have built-in sensors that are supposed to conserve battery during use so you can make them last even longer including one that pauses playback when you take them off.

The ANC seems to be another thing that was left the same as the originals. Again, it wasn’t bad but it wasn’t exactly amazing. If you turn on ANC while playing music everything it does work fairly well. Voices will still penetrate through obviously but the low rumble of trains disappears. There is a faint hissing noise when you’re not playing anything and the train rumble becomes slightly more audible, but it still works reasonably well. Just don’t expect to be alone on your own little private island of music. If you enjoy headphones with a lot of low end, you’re going to like these. I prefer a more toned down bass but I can appreciate a strong bass when it’s done right. These do a good job at emphasizing the right parts of the low end, even if it sometimes bleeds into the mids.

Vocals and snares came through over the top of the other instruments, but those instruments tended to stay in the background of most of the songs. The mids are fine and there isn’t much negative to say, but don’t expect to hear every detail of some of your favorite songs.

Highs were good and never got harsh at all. Guitar slides had a good amount of detail and in the many hours of testing I never had any cringeworthy moments. Instead of making a brand new pair of headphones, Plantronics fine tuned their already good headphones to be even better. The ANC is more or less the same, battery life is still amazing, and the headphones are still packed with tons of functionality. In fact the only complaint in my opinion might be that it has too much functionality, but I tend to be a minimalist when it comes to things like this. That said, that’s one of the selling points of these headphones. The Plantronics Backbeat Pro+ aren’t a cheap pair of headphones, but just like the originals they’re definitely worth it if you’re already in the market and want as many features as possible in your headphones.