The Photive Cyren is a serviceable budget speaker, but doesn’t impress us nearly as much as Photive’s wireless headphones have.

Battery life is better than stated
Plenty of dedicated buttons

It’s not bad by any means, but nothing about the Cyren really stands out as particularly impressive. 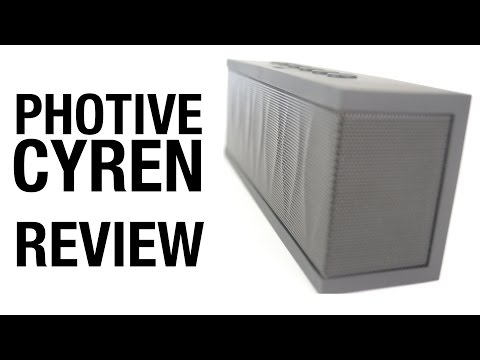 While the company seems to be on the rise, I have to admit that I wasn’t aware of Photive before I reviewed their BTH3 headphones. Though the other headphones I tried from Photive, the PH-BTX6 weren’t quite as nice, both pairs proved to be a pleasant surprise, combining nice performance with a fairly low price point. Photive was now on my radar.

With that being the case, as soon as I found out about the Photive Cyren, a Bluetooth speaker from the company that seemed to offer the same audio goodness but in speaker form, I had to check it out. When it arrived, I crossed my fingers and opened up the box.

Though the box that holds the Photive Cyren isn’t exactly large, there are a nice amount of extras packed inside. In addition to the speaker itself, you’ll find a USB cable, 3.5 mm audio cable, carrying bag and, of course, the manual.

We’re looking at the Photive Cyren in the pseudo-standard color of black, but if you prefer your speakers to be more colorful, you can also pick it up in orange, blue, purple and red. The color of the front grille may change depending on the color, but one thing that stays constant is its odd shape, which is somewhat similar to the Solememo Myvision N16 we recently reviewed.

The size of the Cyren is fairly small at 6 x 2.5 x 2.6 inches, and it’s also fairly light, weighing in at just 11 ounces. Though this makes it light enough to carry around and arguably small enough to fit in a pocket, you may want to be careful. Despite the rubberized feel of the plastic that comprises the surface of most of the speaker, the Photive Cyren has the sharpest edges I’ve ever seen on a Bluetooth speaker. If you’re not careful, it seems entirely possible that you could hurt yourself handling this speaker.

The Photive Cyren uses Bluetooth 3.0 for its connectivity. Though this isn’t the newest, shiniest version, it can help compatability somewhat. There’s no NFC here, but pairing is still fairly easy. Flip the dedicated power switch and the Cyren should start broadcasting; then pair from the device of your choice.

Range is the standard 33 feet, and I didn’t encounter any skips or dropouts while moving around as long as I stayed within range. A 3.5 mm jack on the back lets you plug in any devices that don’t support Bluetooth using the included cable, and the status light makes things like pairing a less confusing process.

Unlike a lot of budget Bluetooth speakers, the Photive Cyren packs plenty of buttons. You have dedicated volume buttons as well as a play / pause button and buttons for skipping forward and backward. Instead of using the play button to answer and end calls, there is a dedicated call button as well. Speakerphone conversations using the built-in microphone sounded decent enough, though the mic doesn’t do you any favors when compared to speaking directly into your phone.

Photive states battery life for the Cyren at 8 hours, which is fairly respectable for a budget speaker. In testing I found that I’d already passed 8 hours when the speaker’s built-in low battery warning sound began to play. No AC adapter is included, but the speaker charges via USB, so keeping it full of juice shouldn’t be a problem.

In testing the Photive Cyren, we briefly played music from a computer through a Focusrite Saffire Pro 40 audio interface, but since most people will only use this speaker for its Bluetooth capabilities, that’s how we did the majority of our testing.

Bass in a speaker this small is always a tricky thing. While this speaker doesn’t sound as thin as a lot of speakers we’ve heard, it isn’t a bassy as other speakers this size we’ve heard either. Luckily bass doesn’t disappear as in some other speakers, it just sounds weak.

Like the bass, the mids the Photive Cyren pumps out are a little thin sounding. Again, given the size and price, this is somewhat expected. Vocals do stand out well, with plenty of clarity and intelligibility.

The highs are certainly not weak here. On some songs this can be a good thing, though on others they did start to wander into the realm of harsh and piercing.

There isn’t really any stereo to speak of — a statement that could easily be made about any speaker this size. Volume wise, the speaker can get fairly loud, though it can begin to distort at the highest volumes.

First things first: at the MSRP of $119.99, this speaker would be fairly outclassed by quite a few speakers we’ve looked at, but I’ve never actually seen it selling for that price. Right now, for example, it’s selling for $39.95. At that price, it becomes a much more attractive option.

That said, while this speaker does a fine job, it doesn’t seem all that special, and is by no means the surprise in a box that the BTH3 headphones were. Even at the lower price, there are better speakers out there. If something about this one — the looks or sharp edges maybe — calls to you, you won’t regret the purchase, there’s just nothing of particular note here.