There are certainly better headphones than the Photive BTH3 out there, but you'll be hard pressed to find a better option in this price range.

There are certainly better headphones than the Photive BTH3 out there, but you'll be hard pressed to find a better option in this price range. 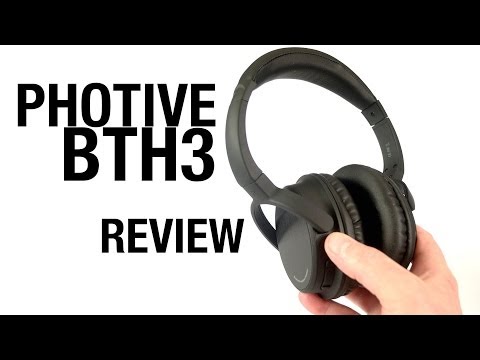 In January, Photive released two new pairs of Bluetooth headphones — the BTH3 and BTX6. Despite the suspiciously low prices for the features offered and Photive’s relatively low brand-recognition, buyers seemed to love them. Seeing the reaction on Amazon end elsewhere, we decided we had to check them out for ourselves.

The BTH3 are the cheaper of the two pairs, though feature parity is close. Often going for just $50 online, the potential value here is great — assuming the headphones hold up, anyway. So, do they?

Opening up the box that holds the Photive BTH3 headphones the only thing you’ll see is the hard travel case; everything else is inside. Looking inside the case, you’ll find the headphones themselves, user’s guide, USB charging cable, and a 3.5 mm audio cable. Considering we’ve seen a whole lot less from headphones costing a whole lot more, this isn’t bad.

As you might imagine, with the Photive BTH3 being the cheaper of the two, these headphones aren’t as flashy looking as the BTX6. Whether or not this is a bad thing is really up to you. They’re certainly not an ugly pair of headphones, and while they lack the bold shape and more style-focused design of the BTX6, they’re also not nearly as weird looking. These are also on the slimmer side, unlike the bulky BTX6.

This is a fairly comfortable pair of headphones. It might lack the slightly puffier ear cushions of its more expensive cousin, but as these are also lighter, excessive cushioning isn’t really necessary. After around two hours of use, I certainly could feel that I was wearing headphones — these don’t disappear the way pricier headphones like Bose’s SoundTrues do — but they didn’t feel irritating or particularly uncomfortable, even after that long. Likely due to the fact that they aren’t collapsible, the BTH3 are more adjustable than the BTX6 headphones. The ear cups rotate quite a bit, and along with the adjustable headband, it’s pretty easy to find a good fit with these headphones.

Don’t worry about carrying these around with you either. Even though they aren’t collapsible, they come with a hardshell case that isn’t all that much larger than the headphones themselves, so you’ll be able to easily keep them protected. This is nice to see, as we’ve seen much more expensive headphones offer only a soft case, or no case at all.s

Pairing the Photive BTH3 headphones with the device of your choice is a fairly easy process. Though these don’t feature the audible instructions and cues that the BTX6 do, the flashing light on the side of the left ear cup is enough of a cue to make it simple to figure out that they automatically start broadcasting as soon as you turn them on. Interestingly enough, this pair of headphones features a dedicated power button and separate play/pause button, unlike the multi-function button used on many headphones

Speaking of buttons, the BTH3 headphones are packed with them. The left ear cup holds the aforementioned play/pause button as well as the forward / skip and rewind / back buttons. The right ear cup holds the power button as well as dedicated volume buttons. Again, some might balk at the sheer amount of buttons here, but I found it refreshing to have some much control available. Unlike some headphones, all of the buttons worked perfectly with my Moto X during testing.

The microphone is decent, but nothing to write home about. As with all headphones of this type, the microphone placement can cause you to sound slightly more “distant” than if you were speaking directly into your phone, but it’s not a drastic step down in sound quality. Bluetooth range easily met the 33ft advertised, and sustained listening at this distance was perfectly fine, though moving too far beyond quickly led to dropouts and skipping.

The lithium-ion battery in the BTH3 is promised by Photive to provide a listening time of up to 12 hours. Even after testing the headphones for over 11 hours at moderate and higher volume, I hadn’t noticed any sort of low battery warning. They also charged very quickly —ear cup though I didn’t fully exhaust the battery, it was still nice to see that they reached a full charge in less than two hours.

Both the charging port and the 3.5 mm audio-in jack are located on the right ear cup, and it’s nice to see that they are covered. This pair of headphones isn’t advertised as weatherproof, but it’s still nice to see that it isn’t easy for sand or moisture to get inside.

Both the Photive BTH3 and BTX6 use 40 mm drivers, though listening for just a few seconds makes it clear that these don’t use the same 40 mm drivers. The sonic signature of each pair of headphones is drastically different from the other, and seems to be aimed at different types of listeners.

In testing the BTH3 I listened to both a smartphone (a Motorola Moto X) connected via Bluetooth, and to lossless FLAC files and CDs through the 3.5 mm cable, connected to a computer via a Focusrite Saffire Pro 40 audio interface. As usual, I played music of all sorts of genres, as well as a handful of podcasts and an audiobook.

Unlike the Photive BTX6 headphones and their X-Bass branding, the bass is not overpowering or heavily emphasized in the BTH3. It isn’t lacking or thin-sounding either — it’s just not clearly boosted as with the BTX3. Bass response is a little on the slow side, so a slight lack of tight focus can pop up in certain types of music, with fast metal or punk being the notable examples here.

The mids are crisp and clear, without the slightly boxy sound that is so present in single-driver headphones in this price range. There is an apparent slight boost around the 1 kHz range, which is presumably there to give vocals a slight boost. This is slight enough to not be obnoxious, and doesn’t adversely affect the sound.

The highs are clear and crisp, almost to a fault. The highs aren’t overly emphasized, but there is a crisp sort of sizzle to the highs that isn’t always apparent, but was noticeable on some songs.

Soundstage was surprisingly decent for closed-back headphones, even when using them via Bluetooth. I know Bluetooth sound has come a long way, but this still surprised me a bit. Generally, this is a well-balanced and fairly good sounding pair of headphones, and I actually preferred the sound of the BTH3 to the pricier BTX6, though I’m not certain that this opinion will be shared. For an asking price of $49.95, this is an incredibly solid pair of headphones. Though the BTH3 might not be as comfortable or as bass-heavy as the ever so slightly more expensive BTX6, they’re more balanced sounding, lighter, and are more adjustable. Personally, I prefer the sound of the BTH3 to the BTX6, so this isn’t a case where the more expensive pair is obviously better. Both have their strengths and weaknesses.

Are there better headphones out there? Most definitely. But in this price range the competition is slim. There may be competition that can offer a decent fight, but the Photive BTH3 are among the best Bluetooth headphones we’ve seen at this price.