The commuters choice award goes to..

If you're looking for durable earphones that can survive commuting and also sound good, the ME01s are a great match.

Master & Dynamic is a New York based audio company with headphones that skip over the “budget” category for a reason. Their products are usually very well designed with sound that’s hard not to like. Still, they don’t come cheap. We already looked at their most expensive over and in-ears, but what about their entry-level product: the ME01s?

When you open the box you’ll get a few things. First you’ll get a nice hard-shell leather carrying case with the headphones inside. Then there’s a small disc with extra silicone tips for getting the perfect fit. There’s even a small note explaining what that means. After that you’ll get a soft fabric carrying case that snaps open and close when you want to store the ME01s, a metal cable clip, an instruction booklet, and a welcome note from Master & Dynamic.

Master & dynamic don’t make cheap products. The ME01 earphones are their entry-level pair of earphones, but you wouldn’t know it by looking at them. The 8mm drivers are housed in aluminum ‘buds that don’t feel like they’d break no matter how many times you stuff them in your back pocket and sit on them (like I did). There’s a nice textured pattern on the back and sides of the ‘buds as well and the only branding you’ll find is a tiny “ME01” carved into the side of the earbuds. That aluminum is reflected all along the headphones, appearing again on the mic, 3-button control module, and at the connector. I do wish that the metal also appeared on the control buttons for a more unified look and feel, but that’s just personal taste.

The flat rubber cable also means that you don’t have to worry about them balling up into a tangled mess. If you find yourself hastily stuffing headphones into your pockets these will be able to take the abuse easily. Just be careful not to accidentally lose the silicone ear tips as I had them fall off twice when removing it from my backpack. I guess that’s why they come with a leather carrying case. As far as build and design goes, Master & Dynamic stays true to their industrial roots and these are top notch. We’re looking at the Gunmetal color option here, but they also come in a stealthy Black Metal.

The ME01 earphones are intended to be used with mobile devices, but they also work with anything that has a 3.5mm jack. That said, they’re designed to work with iOS so if you’re using an Android phone you’ll be missing out on some playback controls. On iOS you can pause or play music and skip between tracks by clicking the middle button once, twice, or three times. Holding it down will activate Siri and you can also adjust volume right from the control module.

These controls also work on a Mac and you can even access Siri on desktop thanks to the new Sierra update which is pretty nifty (and also the only time I ever used Siri on Mac). android users can still expect pause/play functionality, skipping to the next track, and the ability to access the Google Assistant, but volume controls and returning to a previous track are missing. It would be nice if M&D would make an Android compatible version like some other manufacturers do, but it’s not hard to see why iOS is their primary target.

We did our testing using mobile devices along with streaming services like Spotify and Google Play Music. Both apps had the streaming set to high quality but we also used some personal FLAC files just to make sure.

Lows on the ME01 are fairly powerful, more so than the more premium ME05. That said, don’t expect to have them overpower your music like some other brands. M&D still manages to maintain a certain level of control over basslines that will keep your music pumping without taking over.

On the other hand, mids tend to be toned down a little. “Home” by Michael Kiwanuka still keeps a lot of its texture and the guitar comes through clearly, but vocals aren’t as prominent as other headphones. This is definitely the case when the percussion elements come in about a minute into the song.

The ME01 does great with the highs, maintaining all of the shimmer of hi-hats and shakers in “Hometown” by Bruce Springsteen with great detail. Even the guitar coming in does nothing to get in the way of the higher elements. 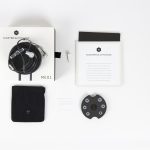 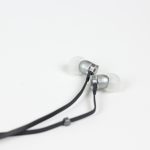 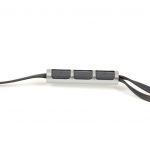 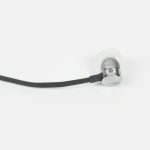 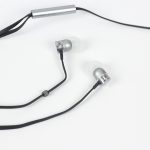 If you were interested in the ME05s when we covered them but couldn’t justify the price tag, the ME01 earphones are the perfect way to introduce yourself to Master & Dynamic. They don’t sound quite as good, but they also aren’t nearly as expensive. It’s hard to recommend spending $129 on these if you’re looking for great sounding in-ears for heavy listening, but if you’re a commuter looking to step up your headphone game these are a great choice. They have a good sound that make your commutes enjoyable, a build durable enough for a long life of being stuffed in pockets, and a tangle-free cable that will make it easy to pull them out and start listening again. For truly great sound there are better options out there, but the entry-level ME01s do a little of everything and do it well.