The JBL Pulse 3 isn't the best speaker that the company offers, but it's definitely the most fun to look at. That alone could make it worth the money if you're into speakers that look like lava lamps. 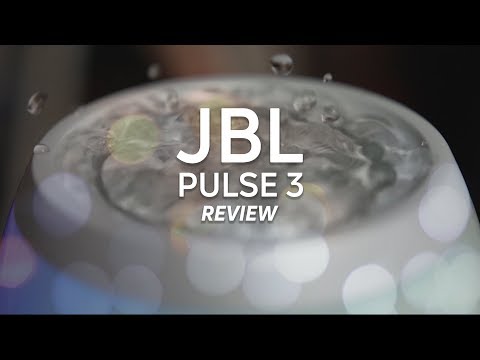 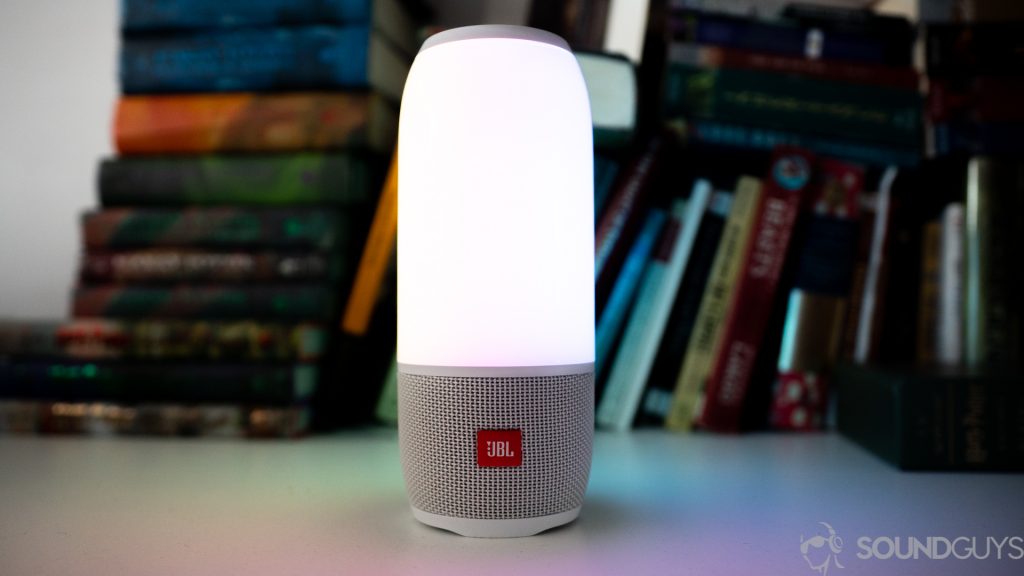 The Pulse 3 isn’t the most portable speaker, but it certainly does look good.

If there’s one company that’s doing everything it can to take over the world of Bluetooth speakers, it’s JBL. And it’s doing a damn good job of it. The company rarely disappoints with its products. We’ve reviewed everything from the tiny JBL Clip 3 to the larger Charge 4 and have always come away impressed.

JBL speakers are never perfect, but it knows its customers. Every product has a specific use case to complement a given lifestyle. Take the Clip 3 for example. Whether you’re a hiker or just looking for a cheap speaker to hang in the shower, it does the job well. There’s also the JBL Link 300, which puts the Google Assistant front and center in your living room. But where does the Pulse 3 fit into their lineup? Who is going to want a fairly expensive speaker that looks more like a lava lamp then a speaker?

Editor’s note: This post was updated on March 8th, 2020 to reflect changes in pricing.

Who is this for?

The build quality of the Pulse 3 is pretty great I mean, this thing looks damn cool in the dark.

The JBL Pulse series is full of fun products, but they always looked more like a gadget than a speaker. Now, finally, JBL has nailed the design and made it what it should’ve been all along: a lava lamp. I mean that in the best way possible.

The Pulse 3 is mostly a plastic lantern with psychedelic light patterns swirling around. The drivers are located toward the bottom with just the dual passive radiators on either of the colorful cylinder. The upgrades from the previous model aren’t just for aesthetics, though. The Pulse 3 is now entirely waterproof with a watertight IPX7 rating, which is great considering that the Pulse 2 before it was only splashproof. Now you don’t have to worry about dropping the Pulse 3 in the pool, which is a good thing as poolside or next to a hot tub is one of the use cases I think it’s going to excel at. 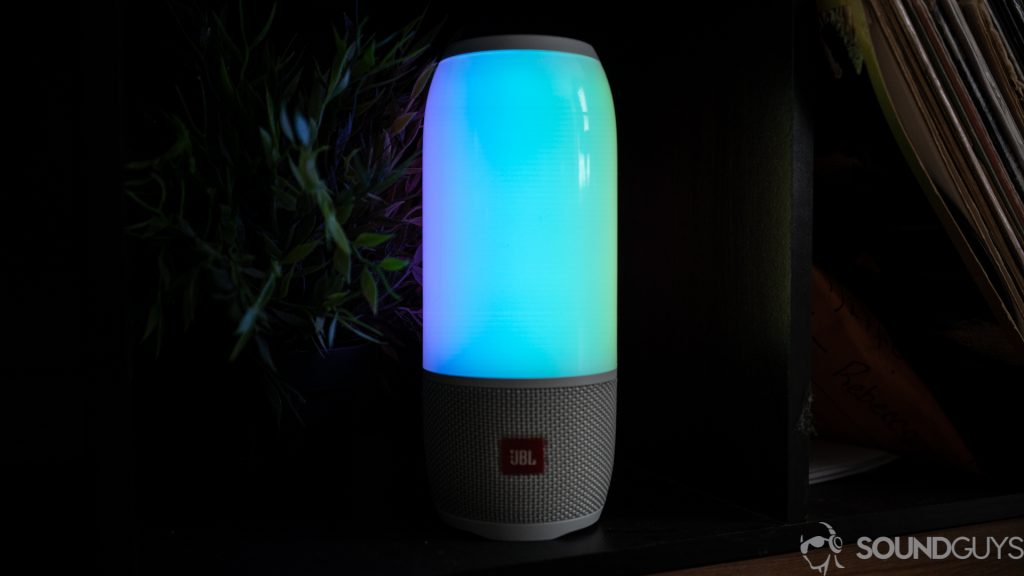 The speaker is made of mainly plastic, but it still features an IPX7 certification.

The overall design was also consolidated to move much of the functionality to one small part on the back of the speaker. This not only allows for the entire top portion of the speaker to be the lava lamp that it is, but it also makes it easier to find the correct button. Underneath a small flap on the back are the only two ports on the speaker: a 3.5mm input and a micro-USB input. Then there are the dual passive radiators on either end of the cylinder which are similar, if not exactly the same as the ones on the JBL Flip 4 or Charge 4. They make the speaker even more fun to watch and also retain its watertight seal. 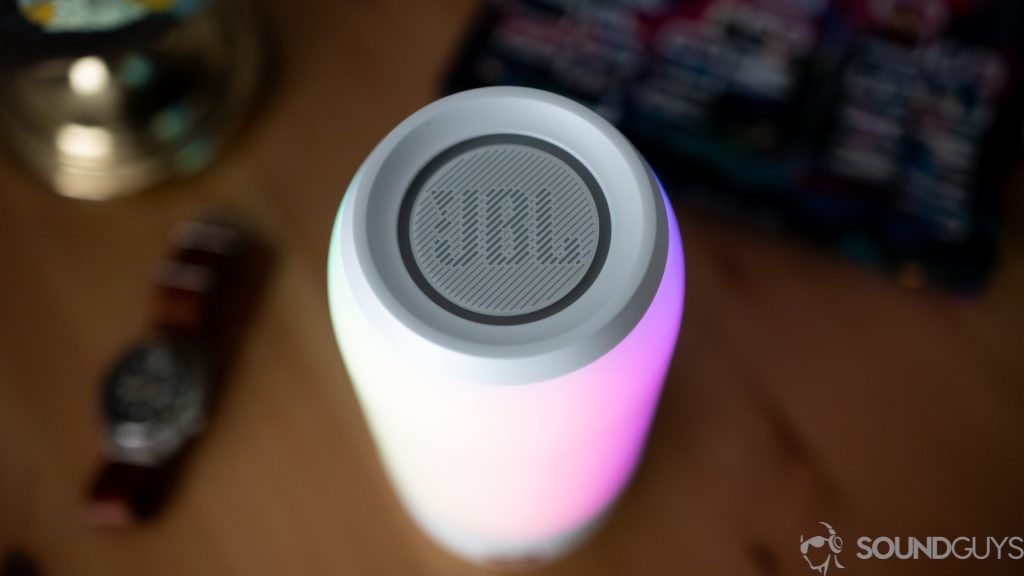 The JBL Pulse 3 speaker has dual passive radiators which give the bass a nice low-end boost.

My one downside with the speaker isn’t really a bad thing depending on how you plan to use the speaker, but I found the Pulse 3 to be a bit bulky. At around 22cm tall and 0.96kg, it isn’t the most portable pick. It won’t be difficult to move it around the house if need be (like poolside), but if you’re hoping to bring it with you somewhere, tossing it in a backpack will be a burden. Since the speaker is made of smooth plastic, it can be difficult to grasp correctly especially if the speaker is wet. Still, if you do manage to stuff it in your pack, I can see this being a great addition on your next camping trip just because of the cool factor.

The JBL Pulse 3 is rocking Bluetooth 4.2 and unsurprisingly doesn’t have any high-quality codec support. So if you’ve used a Bluetooth speaker in the past two or three years, you pretty much know what to expect here. You’ll get a range of roughly 30 feet as well as a slightly annoying lag when watching videos and connected to your phone. Of course, the use case for this particular instance is kind of rare but it’s worth mentioning all the same. 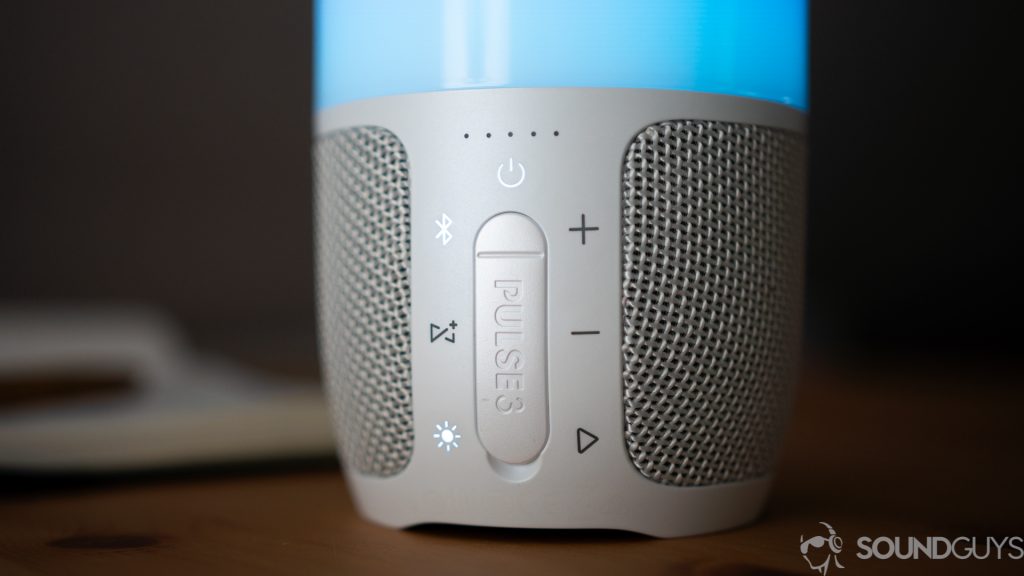 The Pulse 3 features all of the playback buttons on the back of the speaker.

On the back of the speaker are all of the buttons that let you control playback as well as a few other nifty features. You can pause/play music, answer phone calls thanks to the built-in mic, skip to the next track, and adjust the volume. Unfortunately, there’s no returning to a previous track. You’ll also get a dedicated JBL Connect+ button to sync up your Pulse 3 with up to 100 other compatible JBL speakers. This could be cool if you and a friend both opt into the JBL ecosystem (or if you buy more than one). On top of that, there’s also the button that lets you cycle between light show modes, which is useful since you don’t need to go digging through the app every time you want to change the color.

Speaking of the app, it actually isn’t as bad as I was expecting; though, it is fairly useless. The only thing it allows you to do is change the brightness of the light and toggle the functionality of the play button. You can either have it behave as a typical play/pause button or you can have it act as a Google Assistant toggle.

This seems like a super weird choice to me as a physical pause or play button is arguably the most important button. Why should I have to give that up if I also want to use the Google Assistant? I definitely would’ve preferred the option to change the JBL Connect+ button to use that feature instead as I’m 96 percent sure it’s going to see significantly less use than the play button.

How long is the battery life of the JBL Pulse 3? The speaker still uses micro-USB as its main port of charging.

JBL Claims that the Pulse 3 will get you about 12 hours of constant playback. In our testing, we managed to get 10 hours and 43 minutes, which is pretty damn close. Of course, this was with brightness on around 70 percent and volume at a constant 75dB, so you might be able to squeeze a little more juice out of it if you lower the brightness or listen at lower volumes. Once it’s dead, you’ll have to wait around four hours for it to recharge completely, and you’ll have to do so with a micro-USB cable which is a huge bummer. 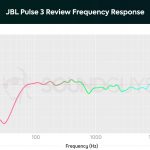 As you can see the Pulse 3 won’t give you a ton of bass, but it’s fairly consistent in all other aspects of the frequency response. The JBL Pulse 3 microphone is fairly decent, giving equal emphasis to frequencies above about 100 Hz.

The microphone quality as you can see from the graph above is actually pretty decent when it comes to voices above around 125Hz. If you have a lower, deeper voice then you won’t come through as loud to the person on the other end, but it gets the job done enough where if you’re just answering a call quickly you should be fine. I just wouldn’t recommend having a full-blown conference call on it.

When it comes to sound quality, I found that the Pulse 3 slots in nicely between some of the other speakers in the JBL line-up. The low end isn’t as pronounced as you’ll get on something like the Charge 4, but it’s still present and way more than what you’ll get on the Flip

The thumping kicks and bassline in the song Haul by Christian Loffler are emphasized enough to make them heard in open spaces. You don’t ever feel like they’re overwhelming the vocals or synths in the mids that drive the song forward. The highs are surprisingly clear. Though, I did feel like there were times when certain sounds came through too harsh for my liking. An example of this was in the piece S.T.A.Y. by Hans Zimmer where the main melody throughout was just shy of sounding piercing.

Should you get the Pulse 3?

The Pulse 3 isn’t the best speaker that JBL has to offer. For that, you’re better off going with the Charge 4 or the Charge 3. It’s roughly the same size but has a better battery life, sound, and is able to charge your devices if they’re running low on juice. Still, the Pulse 3 might be my favorite speaker in the lineup. Almost 11 hours of battery life is nothing to balk at, and that would easily last me a trip to the beach or by the pool. The IPX7 rating makes it tough enough to bring wherever I want, and personally, I’d gladly sacrifice a bit of portability for some of this fun factor.

Of course, if you don’t want to spend the cash you can always go for something like the Anker Soundcore Flare, but that doesn’t get nearly as loud and it doesn’t sound as good either. Still, you’re saving a significant amount of cash if you opt for that speaker instead. While the Pulse 3 could use a bit of refinement, I think it’s definitely the best one to date. If you aren’t too concerned with sound quality and just want a cool speaker to bring to the barbecue, this is for you.

But wait, what about the JBL Pulse 4?

Since the release of the JBL Pulse 3 the company has released a newer and updated Pulse 4, but is it worth the extra cash? While the new Pulse 4 has a new design upgrade, I actually prefer the smooth rounded aesthetic of the Pulse 3. The new Pulse 4 is designed for the entire body of the speaker to be lights rather than just the top portion like the Pulse 3, but in the process it lost some of its whimsical appeal and looks more like a techy gadget than a fun speaker. Some people might enjoy that but I’m not a big fan. JBL Pulse 3 on display at CES

Design aside, there a few other changes that JBL made that are worth noting. For one, the playback buttons are no plastered across the top instead of consolidated onto one small section on the back, and again I don’t enjoy it. Most of the other technical changes that were made seem to be more like JBL taking things away than adding new features. For example, there’s more 3.5mm input or speakerphone, so if you occasionally connect non-Bluetooth devices to your speaker or take phone calls every now and then you’re out of luck. There’s also no voice assistant integration and the speaker itself is larger and heavier in size than the Pulse 3, making it even less portable.

So what did you get in place of those two features? Basically nothing. The Pulse 4 features the same battery same as the Pulse 3, the same Bluetooth version 4.2, and the same IPX7 waterproof certification. To be fair, the Pulse 4 does charge via USB-C which is definitely a future-proofing move, but I’m not sure if that’s enough to justify an entirely new speaker. In short, if you’re debating between speakers I would recommend saving the extra cash and just going with the JBL Pulse 3, especially since the speaker is now more than $100 cheaper than the newer model. If you really care about USB-C charging then go with the newer Pulse 4, but keep in mind what you’re giving up.