The Definitive W Studio is an excellent sound bar with features you don't often see, which probably explains the high price.

If you've just shelled out the cash for a premium TV and don't want to do for a full 5.1 or 7.1 setup, this sound bar is an excellent companion, assuming you've still got money to burn. 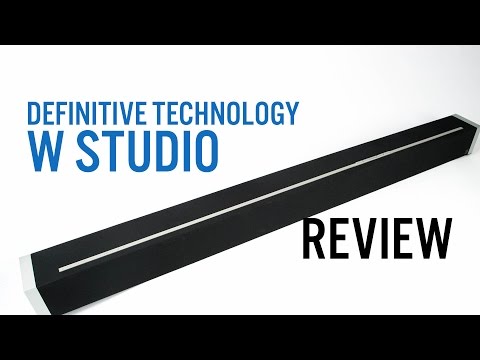 Maybe you’ve noticed, but as televisions have gotten smaller, they’ve started to sound pretty bad. Of course this makes sense: speakers need room to do what they do, and it’s hard to fit a decent speaker into a paper thin TV. Considering this, it’s a little strange that while we’ve reviewed quite a few different products in a few different categories, we haven’t yet reviewed a sound bar.

Definitive Technology has been in the audio business since the 1990s, and the word on the street is that the $1299 Definitive W Studio sound bar is one of the best out there. If we’re going to start reviewing sound bars, why not start with a top of the line example, right? 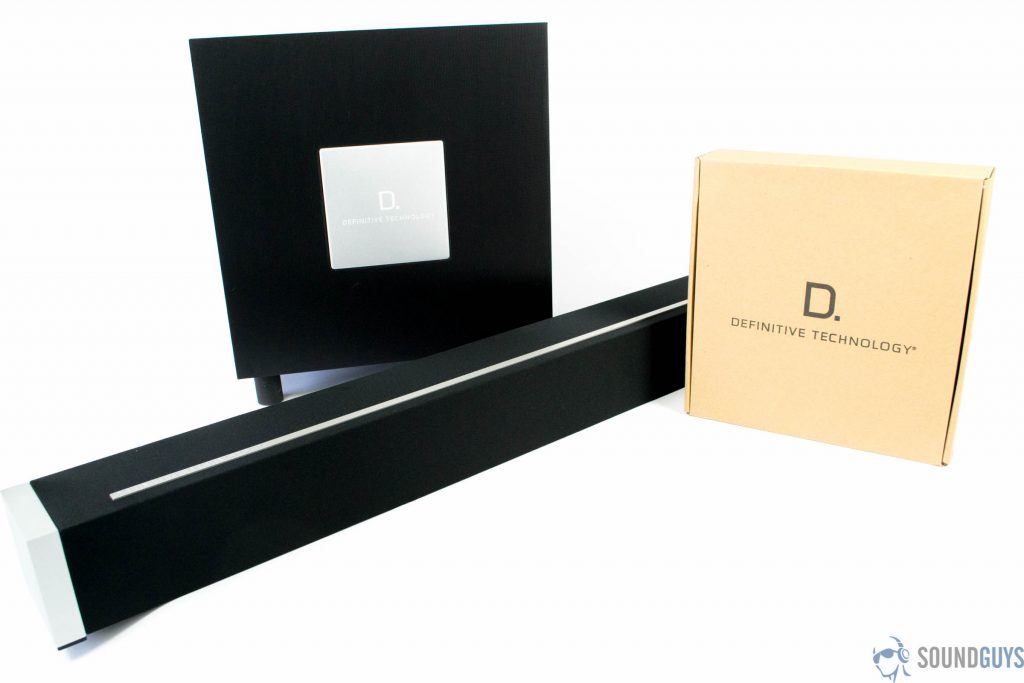 The box makes it very clear that you need to take the subwoofer out of the box first — just be careful, as the speaker is exposed on the bottom, so you don’t want to damage it while lifting the subwoofer out of the box. Next to the subwoofer is the accessories box, while underneath and accessed from the other end of the box is the sound bar itself. Open up the accessories box and you’ll find the power supply and power cables, IR adapters, magnetic risers and wall mount spacers. Finally, you’ll find the remote.

The Definitive W Studio is only available in one color option, so it’s a good thing that it turns out to be of the “looks good with everything variety.” The most prominent color is black, highlighted with touches of silvery gray metal. You won’t find any extraneous curves or scoops here, everything is clean straight lines and rectangles. 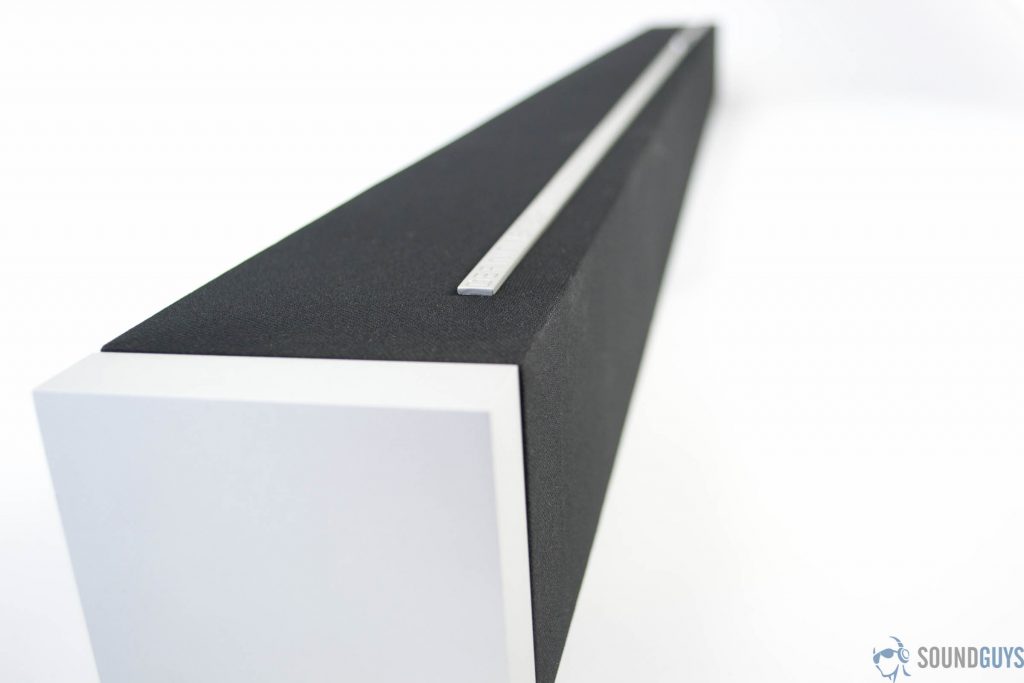 The soundbar is 43 inches wide and measures roughly 3.3 inches in other dimensions. It sits high, even without the magnetic risers, so it may block the bottom of your TV. In my case I found I had to place my TV on a riser to boost its height by an extra inch for everything to match up. The term unassuming feels like an insult, which isn’t the intent, but the sound bar doesn’t attract attention, so it should look good next to any TV. It is quite heavy though, so if you’re wall mounting, make sure you’ve got a solid foundation to mount it on.

The subwoofer is basically a black cube on tiny feet, though the Definitive Technology logo on the front adds a touch of flair. This looks nice enough that you shouldn’t feel the need to keep it hidden, though if you want to, it’s entirely doable — I ended up placing it under an end table while I was testing the system. The subwoofer is wireless, so the only worry you’ve have in placement is making sure it’s near a power outlet.

Unlike a lot of sound bars, the inputs available on the Definitive W Studio resemble an A/V receiver in terms of the sheer amount of options. You have the standard optical input, as well as three HDMI inputs and one output, which will likely be the way most people use this system. An old-school 3.5 mm input rounds out the options. No Bluetooth is available, though the speaker does make use of Play-Fi, which connects to your computer or mobile devices over WiFi. You’ll need an app — Definitive provides its own app for iOS and Android devices, and the DTS Play-Fi app can be used for PCs. Pairing was simple with all of the devices I tested, and streaming performance was good, though its worth mentioning that Definitive recommends an 802.11n router, which was what I used during testing. Other routers may not work as well.

While the included remote offers much more, there are some built-in controls on top of the sound bar. Power, volume, input selection and wireless setup all have dedicated controls. Looking at the remote, a lot more options open up, including dedicated buttons for subwoofer and center channel volume, switching between Music and Movie modes, and navigating the menu. 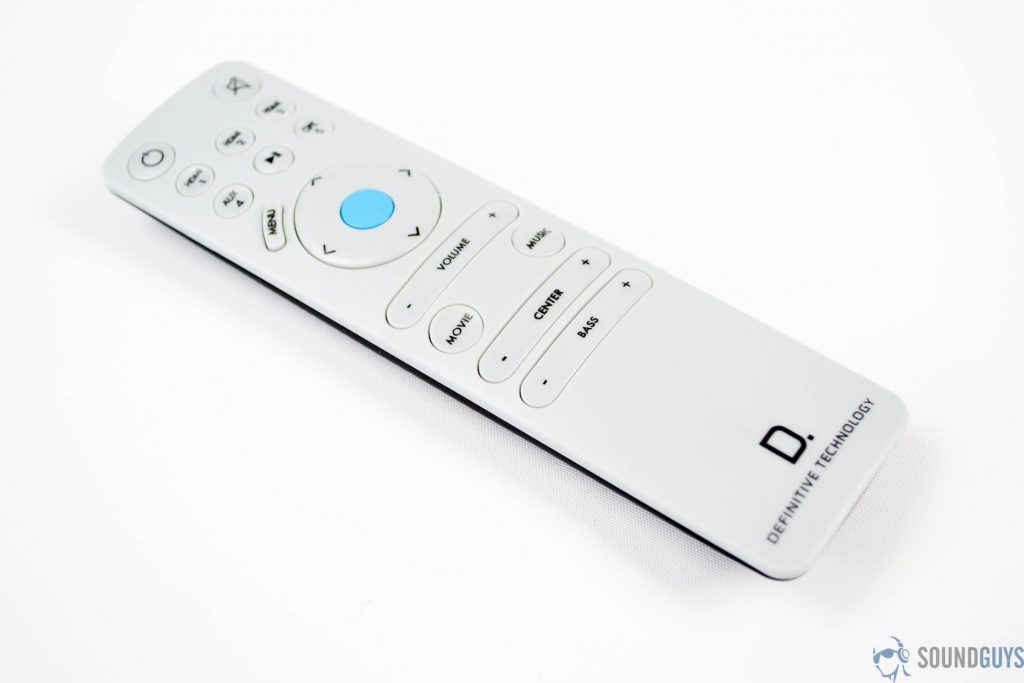 The menu system itself is rudimentary and doesn’t offer much in the way of options. Luckily, you should only need to use the menus briefly, and once the system is set up there is no need to return to the menu. The subwoofer comes paired from the factory and worked as soon as I turned the system on, but this and the adjustments for the surround emulation options in Movie and Music mode should be the only reasons you’ll ever need to head to the menu.

Definitive Technology uses what it calls Solo Surround Array technology to emulate a full 5.1 surround sound setup with just a single sound bar and subwoofer. While in some TVs and sound bars, this can be weak at best and disorienting at the worst, it works well in the W Studio. Still, you’ll need to remain roughly in the center for it to be at its most effective. 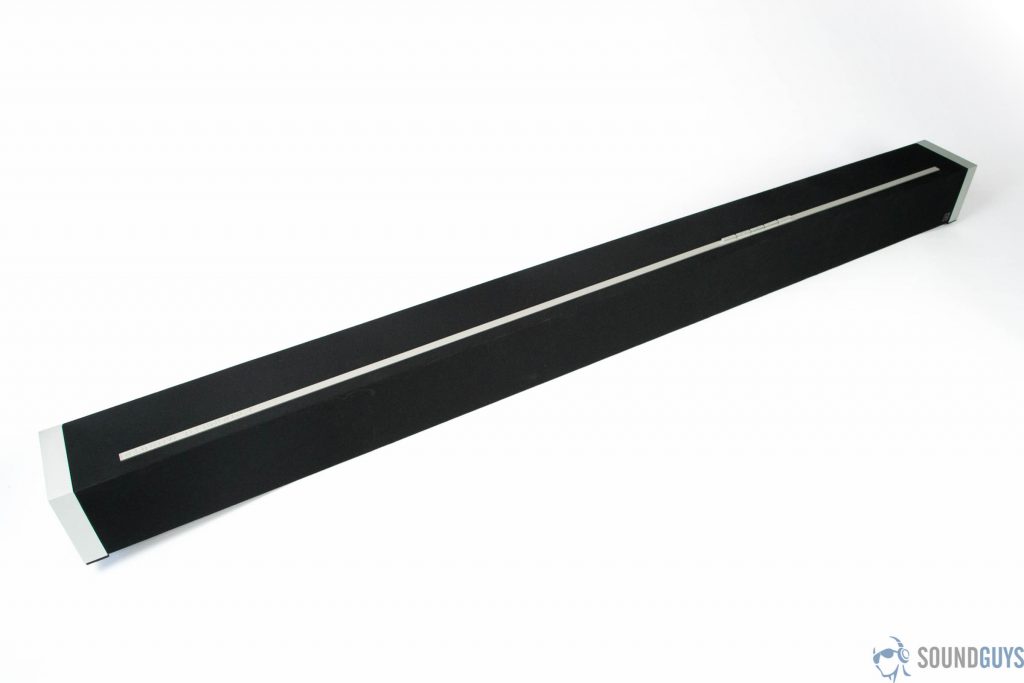 The subwoofer is 200 watts and pumps out a lot of bass. With the subwoofer volume set to the factory settings, explosions in Guardians Of The Galaxy provided more than the necessary impact, while cranking up the subwoofer volume made some effects too powerful. If you’re watching an older film but want the impact of a modern blockbuster, boosting the sub volume is the way to go.

The crossover frequency isn’t adjustable, but it doesn’t seem to need to be. With the subwoofer handling the lows, the sound bar does an excellent job with mids and highs. Again, everything worked great out of the box, but it’s nice to be able to crank up the center channel volume if dialog is lacking. In an episode of Justified this never proved to be necessary, and as a matter of fact, I found that I preferred to keep the center channel at –2 instead of the stock 0 setting.

Sitting directly in front of the soundbar with the subwoofer at the back of the room, with the system set to Movie mode, spatial cues were very well done and the SSA surround emulation was surprisingly effective. That said, I noticed that even turning my head to the side would narrow the sound quite a bit. This is to be expected, and unlike lesser surround emulation, this didn’t result in the odd “circling the room” sound that can occur. 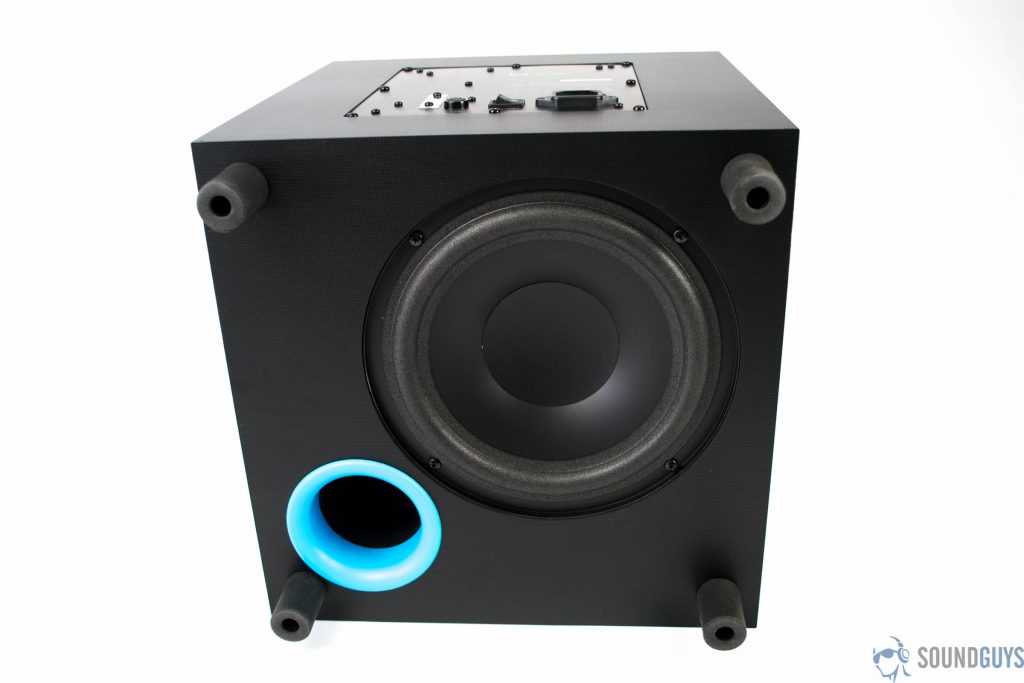 Music sounded great with the speaker in Music mode, though the SSA could occasionally cause an issue where instruments would seem to fade in and out of focus, even though this isn’t the case on other speakers. This didn’t happen often, though, and turning the SSA for Music mode down in the menu did somewhat alleviate the issue.

The Definitive W Studio is a great sound bar and chances are, you’re not going to buy it. Most people spending upwards of $1000 on their home theater audio systems are probably going to go with a full 5.1 or 7.1 setup. That said, there is indeed a market for this system. If you don’t want to deal with a more complex setup or just prefer a more minimalist style and want the perfect sound bar to match your brand new TV, you’re not going to find much better than this one. 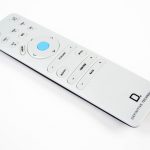 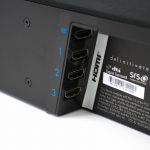 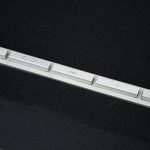 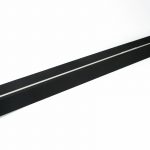 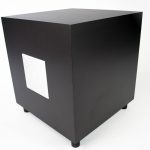