An evolved version of the original, the Creative Sound Blaster Roar 2 takes the same Swiss Army knife approach while refining the design.

An evolved version of the original, this takes the same Swiss Army knife approach while refining the design. 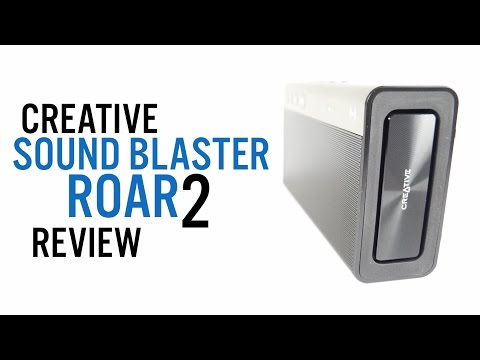 A little over a year ago, we first got our hands on the Creative Sound Blaster Roar, and it was love at first listen. It might not have been the most stylish speaker we’d ever seen, but the sound and sheer amount of things it could do made it an instant favorite.

Eventually, word started to catch on and other fell in love with the Sound Blaster Roar as well. Now Creative has unleased the sequel, the Sound Blaster Roar 2. It’s as feature-packed as the original, only now it’s smaller, sleeker, and more streamlined. Is the updated version superior to its predecessor, or are things just not the same without the boxy charm of the original? If you want to protect your investment, Creative sells an optional carrying bag for the Sound Blaster Roar that will also help keep it protected from accidental drops.

Open up the box and the first thing you’ll find is the speaker itself. Tucked in the box beside it you’ll find the AC adapter, a microUSB cable, and the manual and warranty information.

The original Sound Blaster Roar was only available in one color: gray. The Roar 2 comes in two color options: we’re looking at it in black, but it’s also available in a white model as well. No matter which model you pick, this looks much sleeker than the original speaker did. This is also smaller — 20 percent smaller than the original Roar to be exact. Don’t equate smaller with flimsy, though, or even light. While this is lighter than the original, it isn’t by much, and this is still a very sturdy-feeling Bluetooth speaker.

The Sound Blaster Roar 2 doesn’t use the latest version of Bluetooth, but it does use Bluetooth 3.0 so all the audio-related improvements from that version are here. Pairing is simple no matter how you do it, but if your device is NFC-capable, the NFC pairing makes it even simpler. There are some slight voice prompts here, but nothing as extensive as the Bose SoundLink Mini 2’s prompts. In addition to Bluetooth, you’ve got the standard 3.5 mm auxiliary input, but the Roar 2 does a whole lot more. The Roar 2 still works as an external sound card for your PC or Mac, and call also be plugged into a PS4 via USB. It also features a microSD slot and can play a variety of digital music files.

On the front / top of the speaker, you’ll find the standard buttons: power, volume, and a multifunction button. On the side is where you’ll find the rest. There’s a USB switch, and underneath that you’ll find the ROAR / TeraBass button, playback controls, and recording controls. You’ll also find the plethora of ports here.

In addition to all the other functions, the Roar 2 also includes a built-in microphone for speakerphone calls.

One area where the Roar 2 isn’t significantly better than the previous model is battery life: this offers the same 8-hour battery life that the original model did. On the other hand, there are a few nice touches when it comes to keeping the speaker charged. Even better, the Roar 2 has another built-in USB port, though this one is full-sized and allows you to keep your mobile devices charged using the Roar 2’s 6,000 mAh battery.

While Creative’s ROAR loudness boosting feature was a large part of the original speaker bearing its name, there is a new kid on the block here in the TeraBass feature, which in Creative’s words “intelligently makes up for the perceived loss of bass during low volume playback — all without artificially over-accentuating bass levels.”

We generally test speakers and headphones with the EQ set as flat as possible. Things are no different here, so unless otherwise mentioned, we’re talking about the sound without either ROAR or TeraBass turned on. By default, the lows don’t have the same booming quality that people look for from Bose and similar brands, but turn on TeraBass, and there it is. With TeraBass turned off, the lows are more “realistic,” and though they aren’t super-hyped, they still extend further down than many speakers in this size and price range. For what it’s worth, TeraBass does exactly what Creative says it does: it boosts bass at lower volumes, but never to the point that it is overdone.

The Sound Blaster Roar 2 uses bi-amplified design, with one driving the lows and mids, and another amp just for the highs. This allows for much more accuracy in the lower mids and better low mid depth than we see in many speakers in this price range. Even with ROAR engaged, vocals carry through load and clear, and electric guitars are well represented, making this speaker great for any guitar-heavy music from rock to pop to blues.

Perhaps because of the bi-amplified design, while the highs do have a slight roll-off to prevent harshness, it doesn’t have the same “blanket over the speaker” effect as many other speakers. There is more shimmer and sparkle to high end details like cymbals and tambourines than in speakers from Creative’s competitors. With ROAR and TeraBass turned off, you’ll need to crank the Creative Sound Blaster Roar 2 up to get an idea of its true sound. If you’re powering up a house party you’re good to go, but if your neighbors are easily angered, you’ll be glad that both ROAR and TeraBass are here.

ROAR alone provides a more lively “loud” sound at lower volumes, while TeraBass doesn’t increase loudness, but simply boosts bass. While ROAR does give the speaker a “wider” sound, it is simply too small to provide any true stereo separation, but this applies to all speakers this size.

Simply put, the Creative Sound Blaster Roar 2 keeps everything we loved about the original, while improving on both the sound quality and overall design. No, the alarm button isn’t here, but was that anyone’s favorite feature of the original?

This speaker does so much that its very existence almost just isn’t fair to other speakers, but that isn’t Creative’s problem. This isn’t going to be for everyone — there are smaller, lighter, more portable models out there — but if you’re looking for sheer value and more features than you can count, meet your new best friend.