The Creative Muvo Mini is light, rugged, and sounds surprisingly good for its size, though the small form factor is somewhat limiting.

This is quite a nice speaker, but fierce competition keeps it from being an instant pick. 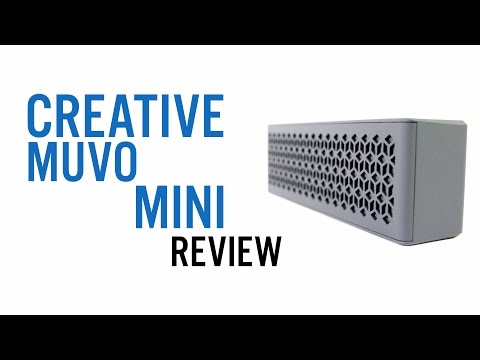 The Muvo Mini is small, even by the standards of the Bluetooth speakers we normally see, and it’s built to withstand significant outdoor usage. Considering the small physical size of the speaker, we were looking forward to see what kind of audio performance Creative could coax out of such a small package. Open up the box, the speaker is the first thing you’ll see. Underneath the speaker (or above it, depending on how you open the box) you’ll find a half-box containing the USB cable and manual and warranty information.

The Creative Muvo Mini is available in four colors. We’re looking at the black model in this review, but the speaker is also available in white, blue, and red.

The look of the speaker is similar to the larger Creative Muvo 20, though the Mini is purely rectangular. The pattern on the front of the speaker is the same, though as the name suggests the Muvo Mini is much smaller measuring 1.7 x 1.4 x 7.4 inches, or 190 x 37 x 59 millimeters. It’s fairly lightweight as well, weighing in at 9.6 ounces, or 285 grams. Unlike the larger Muvo model, the Mini is IP66-certified weather resistant. This means that the speaker is dust-tight, and can withstand a steady stream of water. You don’t want to submerge it, but taking the Muvo Mini in the shower with you shouldn’t be in problem.

As part of this weather resistance, the USB port and 3.5 mm jack on the back of the speaker are covered. This can be tougher to open than what we’ve seen on other speakers, but the added protection is a good trade-off.

The Creative Muvo Mini offers up-to-date Bluetooth 4.0 and NFC connectivity, so pairing is a snap. Power the speaker on, hold down the Bluetooth button to enter pairing mode, then either pair from your device’s Bluetooth menu or tap your NFC-enabled device on the NFC logo on top of the speaker. Range was fairly good. Creative doesn’t mention a maximum range, but I found that the speaker worked quite well within the standard 33 foot range. Even a few walls in the way didn’t cause any stuttering or losses of connectivity.

Controls are provided in the form of four buttons on top of the speaker. On the left you’ll find the power button, then moving right are the Bluetooth button — which also pauses and resumes playback and answers and ends calls — and the + and – buttons, which only control volume. Call quality using the speakerphone functionality was fairly good.

Creative claims a playback time of up to 10 hours for the Muvo Mini. In our testing we found this estimate to be accurate. Our measured time was 9.5 hours, so standard use should certainly see 10 hours of playback. Charge time was just over 2 hours using a standard wall charger. Creative doesn’t include a charger in the box, so charge time will vary depending on what you’re plugging the speaker into for charging.

Creative manages to fit a surprising amount of driver into the Muvo Mini, with two 1.3-inch full range drives and what Creative refers to as a “front bass radiator,” which is passive.

The bass is decent for the size, but that doesn’t mean that this is a particularly bassy speaker. Roll-off starts at around 200 Hz, and as frequencies drop in the range, the also drop in volume. Anything under 50 Hz might as well not exist.

Lower mids have fairly good depth — again, considering the size. Acoustic guitars sounded rich on a string-heavy traditional Irish tune, but the pipes sounded a little piercing as they moved up in the high mids. Still, the lack of boxiness here was a pleasant surprise. The highs are clear enough, but get a little tinny sounding at higher volumes. Detail on the sounds of a guitar pick on strings and fingers sliding on the strings was well represented.

Volume is fairly impressive looking at the size of the speaker, but a strange issue was present where the highest volume setting sounded distorted, even when the volume on the source material was lowered. The Muvo Mini does fill a room, and it sounds fairly big for its size, but keep your expectations in check. There is no question about whether or not the Creative Muvo Mini is worth the $60 asking price — it is without a doubt. The only problem is that speakers that cost just a little bit more (the JBL Flip 2) or a little less (the Anker MP141) offer better sound. Neither of those speakers, however, offer the sheer portability of the Muvo Mini. Is this is a major factor for you, this speaker is absolutely worth a look, especially considering the price.