The Creative Sound Blaster Roar SR20 is essentially the Swiss Army knife of portable speakers, and it sounds pretty good too.

On the heavy side

If you’re looking for the audio equivalent of a Swiss Army knife, this is the speaker for you. 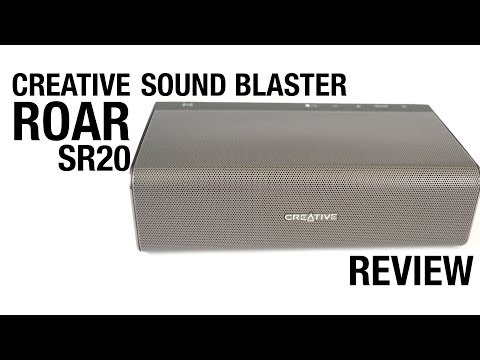 Anybody old enough to remember when sound cards for computers were a big deal likely remembers Creative’s Sound Blaster line of sound cards. Looking on the back of my old PC games, seeing the Sound Blaster logo brings back many a fond memory. That said, I though that those memories were all that remained of the Sound Blaster name. It turns out I was wrong.

Creative is not only still around and making sound cards, but a wide range of audio products including headsets and Bluetooth speakers, all under the Sound Blaster name. The product we’re looking at today, the Sound Blaster Roar SR20 does everything you’d expect a speaker in its class to do, but that’s just the beginning. It also packs a large amount of features we have never seen in a speaker before, so we just had to check it out.

Opening up the box, you get a fairly good look at everything included all at once. The box is divided into two sections, with the larger of the two holding the Sound Blaster Roar SR20 itself, along with the manual. The other side contains the USB cable, AC adapter, and two additional attachments to allow the adapter to be used with different power outlets.

Depending on what part of it you’re looking at, the Sound Blaster Roar SR20 is either simple and elegant, or frighteningly complicated-looking. Every side of it apart from the button panel is very slick looking, but the button panel itself is black plastic with a button count that would be surprising if this unit wasn’t so multi-faceted. On top of the unit is a secondary and far simpler strip of buttons that will suffice if all you’re doing is pairing and playing music from your phone. Most of the rest of the unit is covered in the classy-looking grille.

The Sound Blaster Roar SB20 packs a total of five drivers — three of them actual speakers with magnets — so it’s understandable that this is a fairly heavy unit. It isn’t going to break furniture and it’s not difficult to carry or set up, but this isn’t the kind of unit that you’re going to carry everywhere with you without some sort of bag. To that end, Creative does sell a carrying bag for the Roar, though one isn’t included. This light mesh bag isn’t meant to protect the speaker (that doesn’t feel especially necessary) but simply to carry it. Taking the speaker out of the bag isn’t necessary to use it, and the sound isn’t affected at all.

Looking at standard functionality, pairing the Roar is quick and easy. If your device is NFC-enabled and the Roar is powered on, a simple tap on the NFC icon is all it takes. Otherwise, hold down the multifunction button (marked by the Bluetooth and phone icons) until a friendly voice informs you that you are now in pairing mode. Now just pair from the device of your choosing.

Bluetooth range is around 30 feet, as expected. I listened to several songs at this distance and was able to listen without skips or stutters in the music. Of course, if you can’t or don’t want to use Bluetooth, a 3.5 mm audio in jack allows you to plug the Roar into anything you’d like, but we’re far from done with ways to play music from this unit. Looking over the button panel, you’ll notice a microSD slot, and this isn’t there for firmware updates or something strange like that; it’s there for music. Both MP3 and WMA audio files are supported, and allow the Sound Blaster Roar SB20 to function as a standalone music player — great for parties.

I mentioned above that the Sound Blaster name originated in the sound cards that Creative still makes to this day, and that includes the Roar. Plug this into your PC or Mac, and it allows you access the microSD card. Hold down the play button and something interesting happens: the Roar becomes a USB sound card. And that’s not all, with a quick download, the Sound Blaster Control Panel software allows you to tweak settings like EQ.

The Sound Blaster Roar SR20 can also be used for speakerphone functionality, and the included microphone is fairly good. In addition to simply making calls, the Roar has the functionality to record calls. This isn’t something a lot of people will need, but it’s very handy for those who do need it. Rounding out the various other included features are voice recording, an alarm button that plays a loud noise when pressed, and “Loud Sounds Mode,” which, well, plays loud sounds at random. This is intended to keep you alert and awake.

To power all that connectivity and functionality, the Sound Blaster Roar SR20 packs in a 6,000 mAh battery. Creative claims a battery life of around 8 hours, and their claim seems fairly accurate. During my initial testing, I got slightly less — around 7 hours, but this was really putting the speaker through its paces. In testing the speaker by playing music over Bluetooth, the SD card and via the 3.5 mm jack, I got over 8 hours before I needed to plug the Roar in.

Looking at the button panel, you might notice there are two USB ports — one mini and one full-sized. The mini is for charging the Roar via USB and for plugging it into your computer. The full sized jack allows you to use the Roar to charge other devices. Unlike some of the other features here, we’ve seen this in other speakers before, but it’s still nice to see.

The Creative Sound Blaster Roar SR20 uses a bi-amplified design power five drivers, and the layout of these drivers makes how you place the unit key to getting good sound out of it. Initially I placed the Roar with the button panel on top, instead of on the back of the device as it should be. Not surprisingly, it didn’t sound right. After placing the speaker correctly, I found myself pretty impressed.

In testing, I played music from a wide variety of genres and utilized every available method of playing music through the Roar. It’s worth mentioning that out of the box, the internal settings of the Roar were set to emphasize the bass and treble. For testing I set the EQ to flat, but most people will probably prefer the EQ in its default state.

Once I had the speaker set up properly, I was surprised at how powerful the lows were. As with all speakers of this type, the surface that the speaker rests on can have a lot to do with how much bass carries, so you might want to experiment a bit when first setting it up. Once you’ve got it right, there is a satisfying thump to the bass.

Though speakers in this size have come a long way, boxiness is still the bane of them, but luckily none of that is present here. The midrange is clear and well defined, though as I mentioned above, it is slightly de-emphasized out of the box.

Whether I was listening to smoother acoustic music, or more harshly recorded music like Times New Viking’s “Rip It Off” I didn’t find much harshness in the high end. As you push the volume higher everything gets a little more harsh sounding, but the same can be said about most speakers in this range.

In terms of volume, the Roar gets fairly loud, and due to the side-firing bass ports and dual front speakers, there is a tiny amount of stereo image to be had here, but barely. That’s fine — it isn’t really to be expected in speakers of this size. The ‘ROAR’ button both boosts the volume and slightly tweaks certain frequencies to make the speaker easier to make out in loud situations. In Creative’s words, this makes for “even more powerful, kick-ass, no-holds-barred audio.”

As good as the Creative Sound Blaster ROAR SR20 sounds, it would certainly be worth its $199 retail price if all it did was connect to your device of choice and play music. Considering everything else it does, this is not only a great value, but one of the flat out coolest speakers we’ve seen in some time. It’s not the smallest or most portable speaker we’ve seen for sure, but if you’re looking for the audio equivalent of a Swiss Army knife, this is the speaker for you.