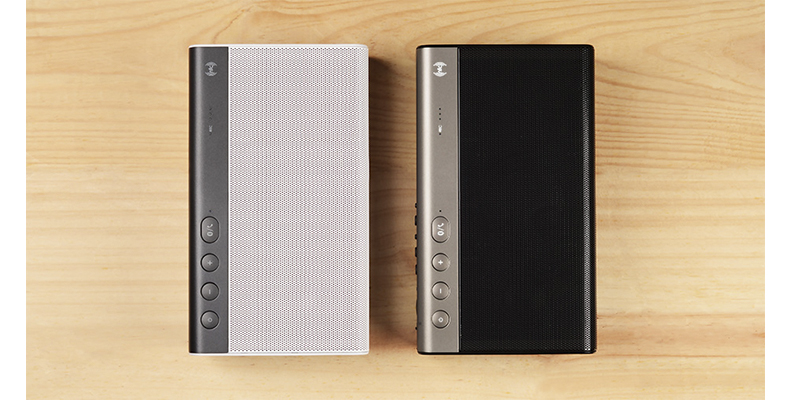 One of our favorite Bluetooth speakers here at SoundGuys was the Creative Roar Sound Blaster SR20. Simply put there isn’t much that it can’t do and the sound is top notch. Creative Labs recently announced the second generation to the speaker aptly named the Creative Roar Sound Blaster 2. The team at Creative continue to challenge the laws of physics as the speaker is now 20% smaller than the original to go along with it’s new sleeker design.

The Sound Blaster Roar 2 can be played in two orientations: vertically or horizontally. Placing it horizontally gives the five speaker drivers breathing room to provide a fuller sound that Creative says will fill the room. On the flip side orienting the Roar 2 vertically gives a louder, more direct listening experience. The speaker uses bi-amplifiers allowing one of them to focus on recreating crisp highs while the other focuses on the low and mid-ranged frequencies. Two 1.5-inch tweeter drivers combine with the 2.5-inch subwoofer driver and two passive radiators to reproduce a wide range of frequencies as cleanly as possible.

One of the standout features of the original Sound Blaster that set it apart from the competition was that it had so many features. The new Roar 2 kept all of the bells and whistles of the original Roar including the NFC capabilities, 3.5 mm input, USB output to charge devices, and a microSD card slot for up to 32GB of your own personal MP3 and WAV files. It also has a built-in mic and speakerphone for voice calls while connected to your phone.

The Roar 2 uses a 6,000 mAh battery and Creative claims this will give you roughly 8 hours of non-stop music playback. They also kept the most unique feature of the SR20 when designing the new Roar 2, which is the ability to connect it to your PC or Mac and use it as a USB sound card when needed. As far as I know this and it’s predecessor are the only speakers that have that ability. Through a downloadable software you can also customize the EQ settings of the device which is another nice touch.

Creative must have realized that they had a premium product on their hands with the original SR20 and the price on the new Sound Blaster Roar 2 reflects that. Though not yet released, the second generation speaker will retail at $329 and comes in both black and white, which is nice since the original Roar SR20 only came in a single gray color. With a higher price tag comes greater competition, and Creative has jumped into the deep end. Are the one of a kind features that set the Roar 2 apart from the pack enough to compete in this price range or has it convinced you to look elsewhere?