The Creative Aurvana In-Ear3 Plus address many of the problems with the originals, while keeping everything that was great about them.

Though they're not exactly cheap, these sound more expensive than they are, and make for a great mid-range pick. 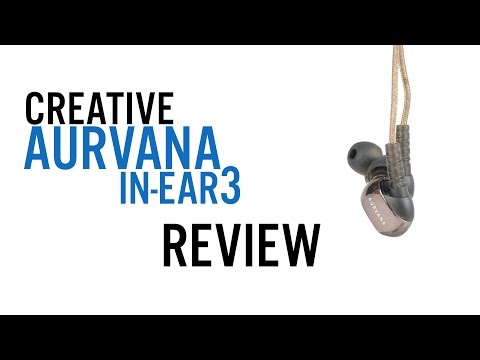 While Creative is still known for more mainstream audio products like Bluetooth speakers, gaming headsets, and the sound cards that made them famous, their more audiophile-focused products are sometimes overlooked.

The headphones are visible without even opening the box, but for everything else, you’ll need to take a look inside. The headphones occupy the top half of the box, while on the bottom you’ll find the wallet-style case and a pouch containing additional tips, an in-flight adapter, and a cleaning tool. Finally, you’ll spot the manual.

For the most part, the Creative Aurvana In-Ear3 Plus are the same as the originals, but there are some differences. To start, the 3.5 mm connector is now angled instead of straight. The cable has now changed as well: instead of the plain rubbery plastic of the original, the cable is now wrapped in braided fabric.

The actual enclosure for the ear bud looks essentially identical. These are only available in one color: a purple-ish gray that looks quite nice in person. The look is a little flashier than some in-ears in this price range, but not over the top. Overall the look is quite nice.

Compared to other in-ears, it’s possible that you may have issues finding a good fit. These are of the upside down / cable over the ear variety, and initially I had trouble finding a good seal with any of the included earbud tips. I found a good fit after some experimentation, but it’s worth keeping in mind.

Connectivity is simple, but works. The headphones use a 4.2 ft cable with an included mic and remote. The remote uses a single button but does offer volume control via a built-in volume slider.

While the in-line volume is handy for taking care of a sudden jump in volume, we wouldn’t recommend using it otherwise. During testing we noticed that keeping the volume anywhere lower than full would thin out the sound noticeably.

Call quality was decent, but is clearly not the main focus of these headphones.

While we did test on multiple mobile devices, given the audiophile focus of these headphones, we did the majority of testing using a Focusrite Saffire Pro 40 audio interface. You’ll definitely get the best results using a higher-quality headphone amp, but these will sound just fine plugged into a phone or iPod as well.

Some complained about the lack of low end in the original Aurvana In-Ear3, and that seems like it might have been addressed here. These certainly aren’t a bass-forward pair of headphones, but we didn’t find the bass lacking. The lows are solid, but it depends on the level of bass in the recording — these certainly don’t boost bass.

Most instruments and vocals have at least a large part of their frequencies in the midrange, and this can often sound crowded on in-ears, but that isn’t the case here. There was a nice crunch to the riffs on JEFF the Brotherhood’s “Melting Place,” and these sound well-suited to rock overall. Male and female vocals alike are treated well, and the high mids are smooth sounding without being overly subdued.

Every once in a while there was a slight hint of harshness in the high end on hi hats and cymbals, but this only occurred at very high volumes. Details are clear and clean sounding, though there is a pleasant softness to vocal sibilance.

Stereo imaging is nice, and the soundstage can vary, but on the right mixes these are very open sounding for in-ears. Unlike some other earbuds, these really come alive when you crank the volume, making them a better fit for those who like it loud.

With a proper fit the noise isolation is very good, though that can be a little trickier here than with some other earbuds.

At $150 these aren’t exactly cheap, but value shown in their other products is still in full effect: these sound like they should sell for more than the list price. If you’re looking to upgrade your cheap in-ears to something better but don’t want to spend over $200, these should definitely be on your short list.