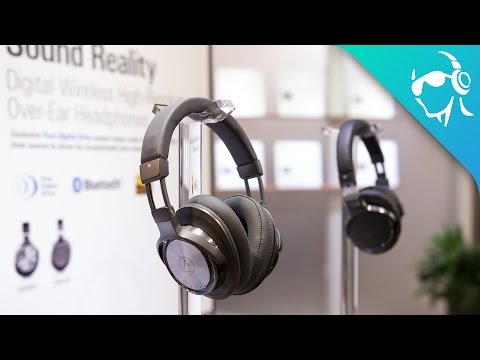 Yesterday was a madhouse, but that was Day 1. Day 2 was a little more chill, but only a little. There’s still plenty to see and we still have two more full days of madness. But what were the coolest stand out products of the day?

We originally covered these when they were first shown off in October, but that was only in Japan. Now they’ve made their way to the US and the ones that caught my eye were the ATH-DSR7BT. The thing to take note of with these is that they don’t have a DAC, instead they use what Audio-Technica says is a “Pure Digital Drive”. They have Bluetooth with aptX HD, 45mm drivers, and 24 bit audio while streaming via Bluetooth. Of course we have to test these out outside of a noisy convention center, but from what we heard they were pretty good.

You may know the name Crazybaby from when they released their levitating speaker the Mars. But this year they’re here at CES showing their newest product called the Air wireless headphones. These are truly wireless ‘buds that are IPX6 certified so you don’t have to worry about water damage. They have the latest CSR chip inside which helps maintain a stable connection between them, and just like other truly wireless earbuds these come with a charging case. They have a four hour battery life but you can charge them up three extra times. They’re coming out this year and you can preorder them now.

Even though it’s still January, it’s never too early to start dreaming of summer and pools. Altec Lansing seems to be on the same page and they announced a large speaker that, according to them, is “everything-proof”. It’s a large durable speaker with an IP67 certification, and it even floats. It also has three USB outputs to charge your phones, a standard outlet for regular things you might need to plug in, and a 50 foot range to top it off. Though it looks kind of big it’s actually pretty light and also gets really loud which is what you want from a speaker you can use poolside.

Keep checking back for our CES coverage.