The Blue Mo-Fi headphones are great if you're going to use them around they house, but they aren't the most portable headphones out there.

These headphones sound great, thanks in part to the built in amp, but they're also heavy and less-than-portable. 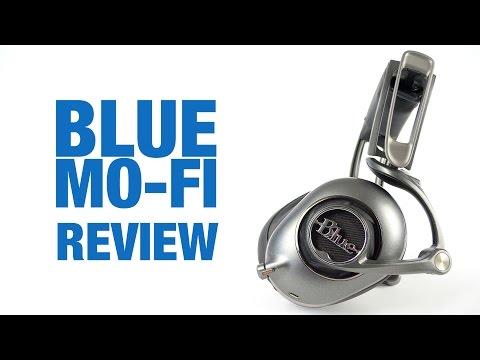 While Blue is likely a familiar name to anyone involved on the production side of audio, your average music listener might not know the name. Until the release of the Blue Mo-Fi headphones, the company was mainly known for its good sounding but wallet friendly microphones, like the Snowball and Yeti. After all, the company’s full name is Blue Microphones.

Unlike most wired headphones, there is quite a bit packed into the box. Open it up and you’ll find the headphones, and a heavy duty bag. Everything else is packed inside the bag: a short cable with mic and remote, a longer cable, a charger and USB cable, an airplane adapter, and finally the manual. The Blue Mo-Fi headphones buck the current trend of coming in every color under the sun – the model we’re looking at in this review is the only color choice available. The color choice isn’t the only difference about the Mo-Fis either. Unlike the unibody plastic builds of many popular headphones, these go for more mechanical, neo-industrial look.

While that all looks nice, it also results in the headphones being fairly heavy. It’s not to the point that they’re unbearably uncomfortable, but you’ll be very aware that you’re wearing a substantial piece of gear on your head. This extra weight also makes for a solid feeling build, but it’s tough to say whether the benefits are worth the downside.

As we briefly mentioned above, the Blue Mo-Fi headphones come with two different cables. The shorter cable includes a mic and remote and is obviously meant for use with mobile devices. The remote is iOS-compatible, though like many similar remotes, the middle button still works with Android devices. The longer cable is meant for home / studio use and doesn’t include any extra frills.

This is the third pair of headphones we’ve reviewed in a row that includes a proprietary cable. In this case it isn’t locking, but instead elongated on the end to reach inside the ear cup that it connects to. It’s also 2.5 mm on the end that connects to the headphones, making it even harder to replace. We’re sure that a generic cable could work as a replacement, but this is still disappointing to see.

It may be odd seeing a battery life section in a review for a wired pair of headphones, but the integrated amp in the Blue Mo-Fis obviously requires power. These headphones can be used without any power, however. Keeping the switch in the off position, these work exactly like any other passive pair of headphones.

Blue claims 12 hours of play time for the Mo-Fi headphones, and although they do come pre-charged, the company recommends charging them before the first use. In our testing, we got around 10 hours, but this included leaving the headphones on for quite some time between playback sessions. Charge time is around 3 – 4 hours, depending on the USB charger used. With the included charger, we found charge time to be closer to 3 hours.

During testing, we plugged the Blue Mo-Fi headphones into a Focusrite Saffire Pro 40 and played lossless audio to test them in passive mode, but since the integrated amp is a major advertised feature, the majority of testing was done with the headphones powered on and plugged into a mobile device.

The mids are rich and thick sounding without becoming overly handy. Piano sounded great, while guitars sounded powerful with just the right amount of bite.

The highs are soft-sounding, yet very detailed. Cymbals never became overly harsh, and high end detail was never lost in the mix.

We really wanted to like the Blue Mo-Fi headphones, and they do have a lot of good qualities. That said, the sheer size and weight doesn’t make them a good option for most people. If you want a pair of headphones to wear at your desk, playing audio through a mobile device or laptop and you’re willing to pay extra, these might be a good choice. For everyone else, the combination of size, weight and price just isn’t a winning one.