Average headphones for below average price.

The Soundbuds NB10s are still a quality pair of inexpensive Anker headphones, but don't expect them to be the best headphones you've ever had. What you pay is what you get, solid 'buds to sweat in. 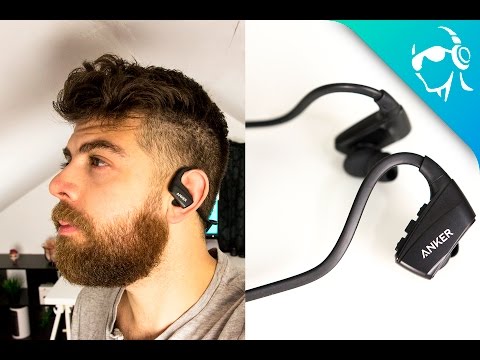 When people are working on a budget and ask what product they should get, it’s not hard to recommend Anker. The company was started by a group of Googlers that knew the future was going to need some quality mobile accessories. Sure you can get charging cables and battery packs from them, but here we’re usually most impressed with their range of audio products. Their speakers are usually easy to recommend, but what about their fitness headphones? In particular, the Soundbuds NB10?

There’s no surprises about the box. It’s the same classic minimal all-black box that most of their products come in. Once you open it up you’ll get the headphones, a nice breathable mesh carrying pouch, a micro USB charging cable, two extra pairs of ear tips and a rubber cable tie, and the instruction booklet and customer satisfaction pamphlet.

When companies want to cut costs, build quality is usually what takes the hit. Metal and leather tend to be replaced by plastic and rubber. Normally that’s a bad thing, but when it comes to fitness headphones that actually helps the cause. First off, these are really light headphones. I was expecting the earbuds to weigh them down and though I’m sure they technically do, you can’t feel the difference between these and some other ‘buds when you’re actually wearing them. The plastic and rubber combo also gives these a clear to sweat-proofing. These have an IPX5 certification against sweat and water along with hydrophobic nano-coating on the inside.

The Soundbuds have an over-ear hook design and come with 3 pairs of ear tips so you can hopefully get a good fit. Pro tip: you’re definitely going to have to use the included rubber cable tie for the extra slack in the headphones. Otherwise these just won’t stay in your ears. That said, even with the right ear tips and cable tie I was surprised that these actually stayed in. Even though they feel like they might fall out, they don’t. Once you get used to that precarious feeling and trust that they’ll stay put they actually are pretty comfortable and easy to use while exercising. Along the top of the right ear bud you’ll find three buttons for playback controls, while the bottom has the small mic and a micro USB port that’s hidden under a plastic flap.

There’s only three buttons, but you do get a fairly useful amount of controls out of them. The two outer buttons only control volume which is straightforward enough, but the middle button is a multifunction button. You can power the Soundbuds on or off by holding this down for a second or two, and you can enter pairing mode if you hold it down for a few more seconds. Pairing was simple and I had no hiccups, though it take a few seconds longer than usual to show up in the Bluetooth devices section of my settings. Once music is playing you can tap the middle button to pause or play music or tap it twice to skip to the next song, but that’s it. No returning to a previous song whether you’re on Android or iOS which is always an annoyance for me.

Connection strength was solid enough and I was able to get to around 30 feet with nothing in the way. With a wall or two I got to around 20 feet, but if my phone was in my pockets I had very few stutters which is always the most important connection feature of a pair of fitness headphones. That said there were a few stutters so it could definitely be better, but it wasn’t bad at all.

Anker claims a battery life of 6 hours, and in our testing we got around 5.5 hours on max volume. That’s pretty good on Ankers part for having an accurate battery life, but considering how large the housing is on these headphones I’m surprised to not have at least 8 hours of playback time. Six hours is on the low side of average nowadays. Still, this will obviously be fine for the average workout but if you’re like me and tend to throw your headphones in your bag after you’re done and forget to charge them, this could be a problem.

I did all of the testing while using apps like Spotify and Google Play Music, since you’re probably not going to be streaming while you exercise. At least that’s what I do. Though these are earbuds, they don’t really provide a great seal which could be good and bad while exercising. It does inevitably lose some quality because of this, but at least on low to moderate volume you’ll be able to somewhat hear what’s going on around you which is good if, for example, you run around your neighborhood.

Low end on the Soundbuds isn’t that strong, especially for a pair of workout ‘buds. I can appreciate a strong low end in workout headphones but I usually don’t like too much bass, that said even I was left wanting more in these. I’m used to more of a thump in the bass kicks of “L.E.S” by Childish Gambino and though I found it fine for casual listening, I missed it when I was running and needed some extra motivation.

Overall mids weren’t as clear as I was expecting. They was enough detail to get by, mainly in terms of vocals, but other elements of some songs didn’t get enough prominence. A good example of this was in “Sound & Color” by Alabama Shakes. At times it sounded like the track was just all vocals and you couldn’t really hear past them to appreciate other instruments.

At times the highs became a little harsh, but it wasn’t to the point of pain. It was definitely pulled back a bit where you will tend to lose some detail in cymbals and higher synth elements, with most of the prominence being given to the high mids.

Overall I was fairly impressed with the build quality of the headphones, but not so much with the sound quality which is a weird reversal for Anker. Maybe it’s just because fitness headphones are just more comfortable when they’re made of rubber, but I had no problems wearing these around the house or while running. They don’t have that great a seal so noise isolation isn’t amazing, but that’s also what makes them comfortable to wear for a long time. I wouldn’t consider sound quality bad, more like just average for the price point. That said, it’s still a good price point at under $50. I still have no problem recommending these, I just don’t see too many people being surprised by them. What you get is what you pay for, a decent pair of headphones.