The folks at Razer continue to expand its efforts to support hardcore gamers, as well as those who play and stream games on the internet for a living. Today, the company announced the Razer Seiren Elite microphone, which it says was built specifically for live streamers and YouTube video creators.

Razer says it wanted to make a professional grade USB microphone that didn’t require users to access any more hardware or software—such as mixers and converters—in order to get high-quality sound for their streaming and gaming videos. The Razer Seiren Elite includes a single dynamic capsule and cardioid capture pattern so users can get an accurate audio recording. It also has a high-pass filter that’s been designed to remove unwanted low-frequency vibrations, including sound that might come from places like fans or air conditioners. 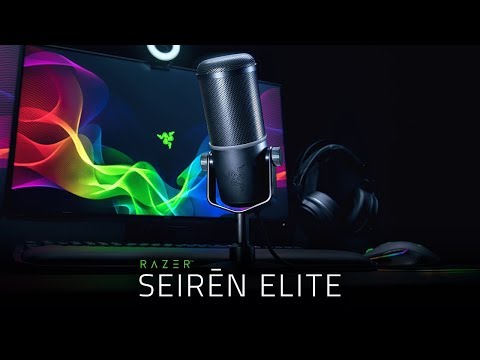 Also, the microphone has its own digital/analog vocal limiter which is supposed to automatically adjust audio gains so there’s little to no distortion and popping while recording. The Razer Seiren Elite supports a 16-bit audio rate and a maximum sample rate of 48 kHz resolution.

The Razer Seiren Elite is now available to purchase from the Razerzone.com online store for $199.99. It joins previously released Razer products made for live streamers and YouTube creators, including the Razer Kiyo video camera and the Razer Ripsaw gaming video capture device.