While the GOgroove BassPULSE are pretty barebones when it comes to features, the price is right and the glowing lights add a nice touch of sci-fi to the style.

Bass is boomy and woofers are slightly tinny

This is a barebones set of speakers in terms of features, but the price is right and they look very cool 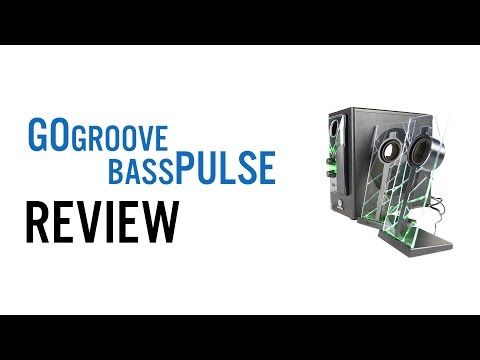 We’ve reviewed a ton of headphones and Bluetooth speakers here at Sound Guys, but we like variety as much as the next bunch of people, so every once in a while we try to mix it up and review something different. Something like desktop speakers, for example.

If you’re the type of person who calls yourself an audiophile, you’re probably not buying computer speakers, but instead going for nearfield monitors. If you’re a gamer or just like to watch movies on your computer, though, a decent pair of desktop speakers might be just what you need. Do the GOgroove BassPULSE have what it takes? Opening up the box, the first thing you’ll see is the subwoofer / control unit, followed by the stereo speakers. Underneath you’ll also find a 3.5 mm audio cable and the manual and warranty information.

Assuming you’ve been blindfolded throughout the entire purchasing process, you might not be too impressed pulling these out of the box. The stereo speakers have a super-slim design that looks like glass but is actually clear plastic, but otherwise, nothing looks too impressive. Turn them on, and it’s a whole different story. A set of LEDs at the base of each speaker shines light (green in our case, but blue and red are also available) up through the plastic, causing the speaker to glow softly. The subwoofer / base unit also has lights, though the chunky build makes it resemble a miniature gaming PC.

The woofer in the base unit makes it fairly weighty, but the stereo speakers are very light. They’re almost too light, actually — I found them moving around my desk by accident quite often during testing.

There are no fancy digital connections here, just a simple 3.5 mm cable to plug into your computer or other device. The GOgroove BassPULSE will work with aux jacks or headphone jacks, so take your pick. The included cable is removable / replaceable, which is nice. Looking at the controls on the bass unit, you have a volume knob, a bass knob, and a button to turn the lights on and off. Turning the bass knob past 80 percent is supposed to cause the lights to pulse with the music you’re listening to, but on my review unit I was never able to get this to work.

The sound quality of these speakers will obviously be affected by the sound card in your computer or the amp in your device, but this should only slightly affect the final sound. Because of the large subwoofer / base unit and the super-small stereo speakers, finding the right balance was tough, as adjusting the bass knob is similar to setting the subwoofer crossover on a home theater setup. Obviously, this is too small to be a true sub, and it ends up more boomy than actually bassy. To improve the bass, you can place this on the floor.

Depending on the music you’re listening to, these can sound somewhat boxy. The low mids are somewhat indistinct in this regard, thought the higher mids are much nicer.

The highs are nice and crisp, though there was a bit of an unwanted “sizzle” to the highs at times, especially when the volume was cranked. Treble can bit a bit tinny at times, but this isn’t always the case. Considering the bass knob on the base unit, a treble knob to cut the high end would have been welcome, as at times I felt the mids were being overshadowed. This was listening to music, thought I should point out that movies and games sounded much better with these speakers than music did.

If volume is your main goal here — if you plan on using them on a laptop with quiet speakers for example — these should be loud enough for most people. At higher volumes they will distort a bit, however.

This is a fairly bare bones set of speakers, but as mentioned at the top of the reviews, if you just want some speakers for gaming or watching the occasional movie, that may be all that you need. Where these stand out is the sci-fi styling. If you’re placing these next to your brightly lit gaming PC, they might be worth a look.