The Denon Envaya matches the sound quality of significantly more expensive speakers, and is customizable to boot.

Very full sounding, especially for the size
Charges other devices
Grill inserts are a nice touch

No speakerphone / hands free
Can't be charged via USB

If you're looking for sound quality comparable to the SoundLink series at a lower price, this is definitely worth a look. 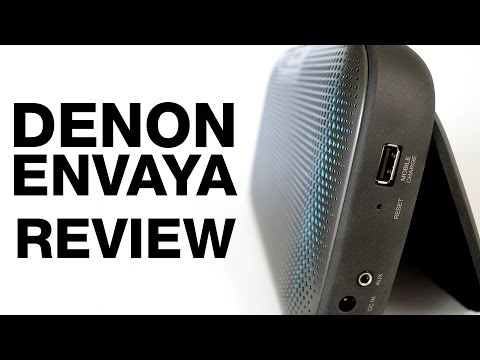 Buy at Amazon
While Denon has been producing hi-fi and home audio equipment since the 1970s, it was much more recently – 1990 to be exact – that they started manufacturing headphones. Naturally, it has only been the past few years that the company has moved into Bluetooth speakers, but in that short time, their products in that category have built up quite the reputation.
The Denon Envaya, their most recent portable wireless speaker (which also happens to be the only one currently listed on their website) is taking aim at some fairly high-profile targets, namely a few Bose products. Priced the same as the Bose SoundLink Mini and more comparable in features to the SoundLink 3, the Envaya is certainly an intriguing product, but does it offer the sound and build quality to make a purchase worthwhile? Read on for our take.

Feeling the weight of the box that carries the Denon Envaya, you might suspect that it’s loaded with accessories, but mainly, the speaker is just heavy. Opening up the box you’ll see the speaker itself as well as a few outlet adapters for the power brick. Lift out the cardboard securing these in place and you’ll find the power brick itself as well as an unusual inclusion: three swappable cloth inserts for the speaker’s front grill.

The speaker is fairly large, measuring roughly 10 inches by 5 inches by 2 inches. It’s also reasonably heavy, weighing in at 2.6 pounds. Given the rounded shape, you might think the speaker would be in danger of falling over, but Denon has a fix for that: a built-in stand on the back of the speaker that allows it to lean back. In addition to keeping the speaker sturdy, this also has the side effect of allowing the Envaya to project its sound around the room more effectively.

Pairing is simple with the Denon Envaya, and there are a few ways to do it. The easiest is to pair via NFC – simply tap your NFC-enabled device on the NFC logo in the middle of the top of the speaker. If you don’t have an NFC-ready device, pairing the old-fashioned way is simple as well. Turning the speaker on for the first time automatically puts the Envaya into pairing mode, so it’s just a matter of pairing from the device of your choosing.

The speaker’s range is the standard 33 feet, and during testing, I found that moving around within this range didn’t cause any break ups or stuttering in the audio. Even putting a few walls between my phone and the speaker didn’t cause any problems. Of course, you can always plug into the aux in jack on the side and tap the aux button on top if you’d rather not connect wirelessly.
Rather than the sparse button layouts that seem to be a trend among many Bluetooth speakers these days, the Denon Envaya provides plenty of control. On the left hand side of the speaker, you’ll find the power, aux, and Bluetooth buttons, while the right hand side is where you’ll find the volume buttons, including something we don’t see too often: a mute button.
If you’re wondering why there is no button to answer and end calls, there is a simple answer: unfortunately, the Envaya doesn’t feature any speakerphone functionality.

Denon claims a battery life of around 10 hours for the Envaya. During testing I found I got fairly close to that number, making it about 9.5 hours before I had to plug in and charge. Bear in mind that testing includes a lot of pairing and unpairing with different devices, frequent volume changes, and other battery-killing maneuvers that don’t tend to occur in actual daily use, so it’s likely that most users will get the 10 hours of battery life stated by Denon.

Charge time is stated as 2 to 2.5 hours with the included charger. Speaking of which, the included charger is the only way to charge the speaker – USB charging isn’t supported. While this is somewhat disappointing, Denon made up for it by adding a full-size USB port on the right side, allowing you to charge your mobile devices with the Envaya. This is something we never get tired of seeing.

The Denon Envaya pumps its sound out of two 57 mm (roughly 2 inches) drivers and also packs a 100 mm (about 4 inches) passive radiator to beef up its bass. Since most people will use this speaker via Bluetooth, this is how the majority of listening was done during testing, though we did hook the Envaya up to a computer through a high quality audio interface into the aux jack as well.

Lows
That passive radiator definitely seems to be doing something right, as the Denon Envaya sounds fairly big for its size and produces a respectable amount of bass. Unlike some speakers from Bose and other companies, there is no feeling that the bass is being “faked” or over-exaggerated.
Mids
There is a depth to the low mids that isn’t often present in Bluetooth speakers. In general, mids are well represented, though to the point that some may consider the Envaya to be a little too mid heavy.
Highs
The highs seem to get the least attention of the frequencies, but by no means are they lacking. Highs aren’t amped to the point of being harsh, but you won’t find yourself straining to hear high end detail.

Like similarly sized speakers from Bose and Sony, the Denon Envaya doesn’t have accurate stereo representation, which is too be expected in a speaker this size. That said, this speaker does have a fairly “wide” sound to it, and fills even medium-large rooms easily. The volume can be cranked fairly high without noticeable distortion, and there should be no need to worry about the speaker getting loud enough. The Denon Envaya’s combination of sound quality, features, and reasonable pricing do indeed cement it as a worthy competitor not only to the SoundLink Mini, but even the Bose SoundLink 3. It’s easy to use, easy on the ears, and the swappable grill inserts are a great touch, especially if you’re a fan of bright colors. What seals the deal, though, is the price. The Envaya is a great bargain, and definitely worth checking out.