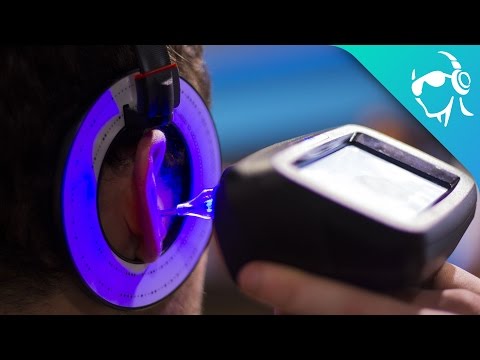 On the last day of CES we thought we’d do something a little different. Rather than going to find all of the best high end gear, we thought we’d find the weirdest off-the-wall audio devices that are actually really cool. And of course, CES didn’t disappoint. You can find all of the major product announcements relatively easily, but you really have to go looking to find some genuinely innovative stuff.

The first thing we tried out was the custom molding done by Echobox. Usually custom molds require filling your ear with gunk, but Echobox doesn’t do that. Instead they have a small machine that looks like kind of like a thermometer that shoots lasers into your ears. It scans your ear shape and turns it into an AutoCAD file, which then gets sent to a team that 3D prints them. This gives you a pair of ear tips that fit perfectly in your ear so if you’re one of those people who has a hard time getting earbuds to stay put, this might be the perfect solution for you. Unfortunately, it does cost about $150 to do and it takes a few weeks to get them shipped to you. Still if you want a mess-free way to get the perfect fit this might be the way to go.

One of the cooler things I saw all of CES was also one that I feel was the most like a toy. Which is a compliment because I love toys and gadgets. The Lofelt Basslet looks exactly like a watch, but it doesn’t tell you the time. Instead, it vibrates along with the music you’re listening to, replicating the bass. It’s basically a subwoofer for your wrist. Obviously it won’t have the same effect as a real sub, but I have to admit it’s still pretty cool and it’s a discrete way to really feel your music. It’s one of those things that I can definitely see myself using on the subway just to get a little more enjoyment out of my commute. It’s set to release on February 7th and will cost $199 when it does.

Ossic X started as a Kickstarter, and had the most successful campaign in the VR category ever. After trying out their 3D audio headphones, it’s not hard to see why. When you put them on, the headphones calibrate themselves to your ears. This allows you to perfectly listen to audio in 3D, be it for music or VR. Listening to music was a nice experience and they’ll definitely make for a good listening session, but the coolest application of these is definitely VR. Which could be why the most prominent demo at their booth involved an HTC Vive. It reproduces the spatial cues that your brain uses in the real world, which should hopefully fix the nausea that some people experience. The headphones were large for sure, but if you’re using them for VR they’re kind of a must-have in my opinion. You can save $200 by pre-ordering them now at their website.