Though it isn't the prettiest or the best sounding speaker in its price range, it's certainly one of the most durable. If you want to bring some sound on your adventures this is a solid option.

If you absolutely love audio you probably have a home speaker if not an entire setup. But what about when you’re on-the-go? You can’t exactly bring your Sonos to the beach or on a hike (unless you have money to blow on another one). For those occasions a secondary speaker that can withstand a beating might be a good investment, and that’s where Braven shines. They’re no strangers to durable speakers, and the new Braven Stryde 360 takes that a step further by combining that durability the company is known for with a design meant to go where you go. So how does it hold up in real world usage?

The speaker comes in a plastic case that was kind of a *censored* to open and I just ended up breaking the case basically. But once you get to the hidden treasure that is the speaker you’ll also get a quick start guide and a small micro USB cable for charging. The Braven Stryde 360 has small “feet” on the bottom to prevent it from rolling around.

At first look the Braven Stryde 360 isn’t exactly gorgeous. It sticks with the durable, rugged design that you’ll find in some of Braven’s other products. I tend to like a more modern, minimal design but this isn’t meant to be kept on a desk when you’re trying to show it off for the gram. It was designed to take with you wherever you go, so its cylindrical shape allows you to fit it perfectly in the cup holder of your car, back, or backpack.

..and its IP67 certification means dirt, sand, or a little rain isn’t a problem

Anywhere a water bottle can fit, this is supposed to fit as well. To be honest I didn’t even realize that’s how the company had designed it until after I had already taken it on a hike. It just felt natural to put it in the cup holder of the car on the way there, and then the spare water bottle pocket in my pack while hiking. I remember thinking I had found some clever life hack when actually that was a design choice. Guess I’m not as clever as I thought I was. The speaker isn’t heavy at all so tossing it in my pack was no problem and its IP67 certification means dirt, sand, or a little rain isn’t a problem.

Now I didn’t toss it off a bridge into the river or anything, but I did do some average drop and scratch tests while out on my hike and the speaker came away virtually unscathed. The plastic casing does get scratched pretty easily but I actually find that it looks a little better when it’s had a rough day. On either end of the speaker are passive radiators similar to the ones you’ll find on the JBL Flip series which you can watch push air while you’re playing music. It definitely looks cool and the fact that it’s still water-resistant is pretty impressive. On either end are passive bass radiators to help move more air.

Now for the things I don’t like about the build, which have a lot to do with the materials used. You’ll get five buttons along the top of the speaker which are all pretty terrible in my opinion. They feel like cheap plastic, are all flush with the speaker so it’s kind of hard to tell which one is which without looking at it, and are pretty stiff too with very little click to them. Just everything you wouldn’t want in buttons. That said, they do all work fine so function over form I guess. Along the bottom of the speaker is a rubber flap that keeps the micro USB input, 3.5mm input, and USB output safe from water, but it’s damn near impossible to get to unless you have witch nails. I literally had to pull out my pocket knife in order to pry the flap back just to see what was under there so if you find yourself needing to take advantage of it’s USB output in a pinch, you might be out of luck unless you find a particularly sharp twig somewhere. 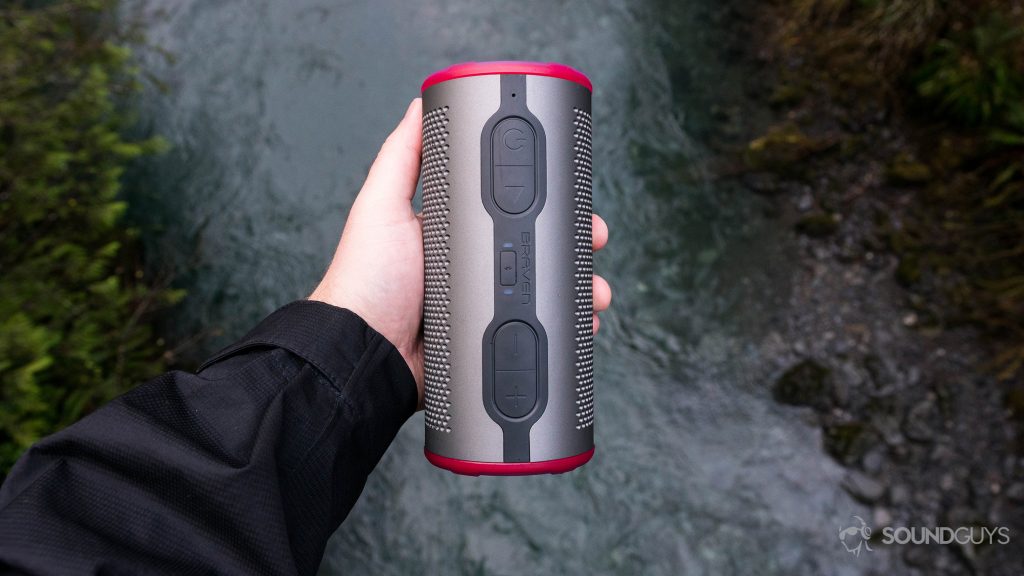 Playback controls can be found along the spine of the Braven Stryde 360.

The Braven Stryde 360 is a Bluetooth speaker so you shouldn’t expect a strong connection past around 30 feet which was fairly accurate in our testing. I was able to walk around my apartment with a few walls in the way without an issue, and I didn’t experience any skips when I was out hiking and the speaker was in my backpack. As far as playback controls go these do work perfectly even if I don’t like the way they feel. You can pause or play music, adjust volume, and skip between tracks by holding down the volume buttons and if you want to answer/end a phone call all you have to do is press the Bluetooth pairing button. The microphone is surprisingly good too with people saying I sounded fine, if a little echo-y. 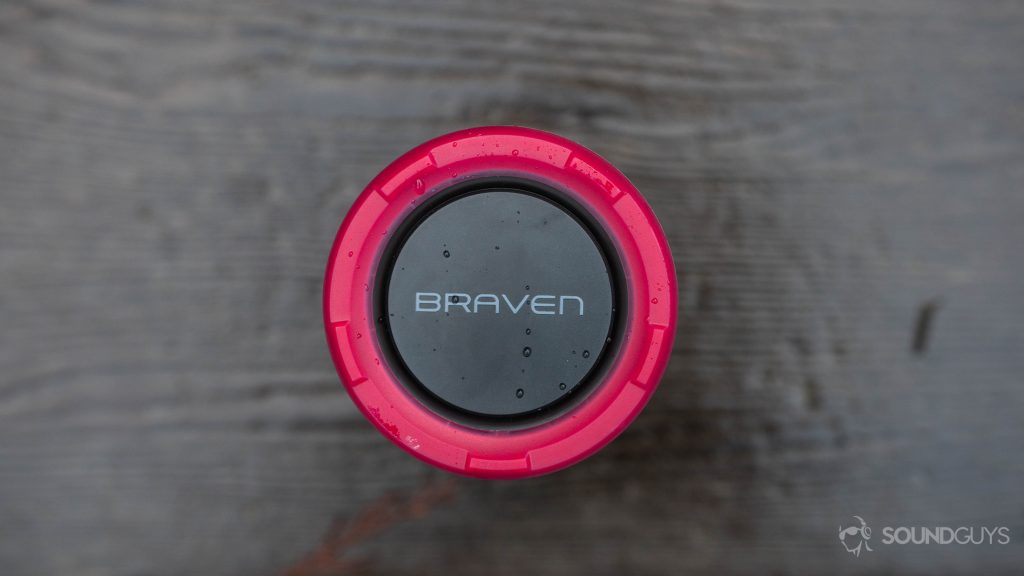 The Stryde 360 has a 2500 mAh battery tucked inside and Braven claims it’ll last you about 12 hours of constant playback. In our testing we got about 10 on max volume which still isn’t bad. If you can find a way to peel back the rubber cover you can also use the USB output to charge your source device which can be pretty useful if you’re out and feel like your source device won’t make it.

When it comes to rugged Bluetooth speakers I usually go into the review expecting them to sound as good a wet sock and hope to be pleasantly surprised. The Braven Stryde 360 does succeed in that endeavour, but not by much. It does play sound in 360-ish degrees but I did find that if you turn the speaker so that the two small stands along the bottom are facing you the sound does get a little more muffled. So I guess I would call this more the “Stryde 320”, but still it’s good enough. 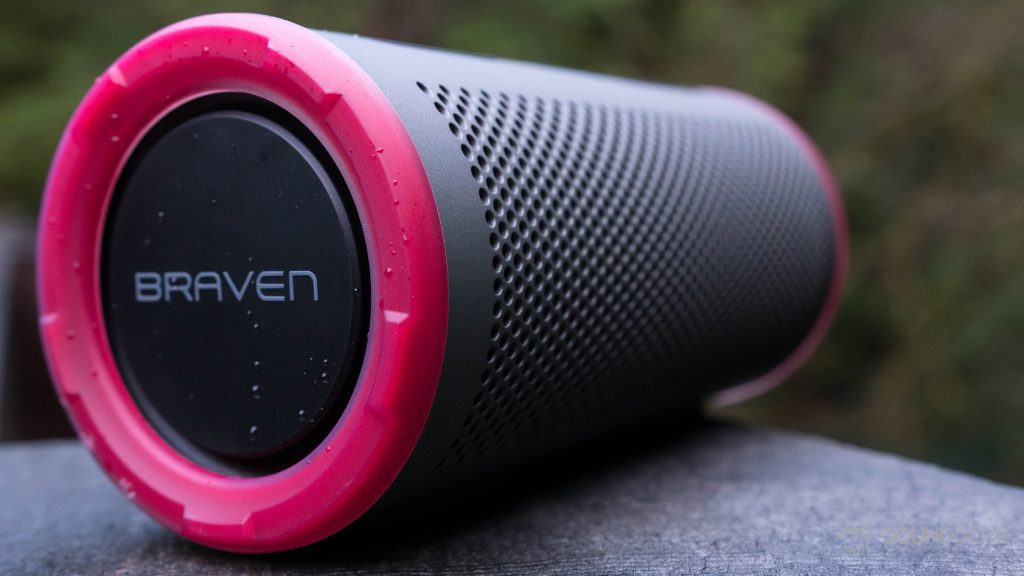 The metal build is fairly durable and it can withstand a good amount of scratches no problem.

I’ll be short and sweet here: if you’re looking for bass, this isn’t the speaker for you. I thought the exposed passive radiators would help give it some extra umpf (and I guess it does), but I feel not enough to please most people.

I found the low end bass kicks of “Far Nearer” by Jamie XX to be nothing more than hollow shells of what I know them to be. And if you’re outside the low end is gets loss to the space around you. The mids were definitely better with vocals in “Night Air” by Jamie Woon cutting through the song easily even though most of the instruments behind him sounded cramped and squished together.

I wasn’t expected any kind of crazy sound stage for a speaker of this price, so it’s just good to see that vocals were done the right way. Unfortunately that doesn’t apply with the highs, and they kind of take after the low end. Highs were a little on the softer side and the hi-hats and cymbal crashes throughout the song “Come On Over” by Mark Lanegan didn’t really have the level of shimmer I know them to have. Though to be fair I wasn’t expected a speaker of this size, purpose, and price to have clarity in the highs but it’s always good to hope. 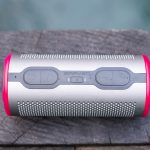 The Braven Stryde 360 has small “feet” on the bottom to prevent it from rolling around. The metal build is fairly durable and it can withstand a good amount of scratches no problem. The highly visible reddish-pink accents allow for easy viewing in the dark. Playback controls can be found along the spine of the Braven Stryde 360. 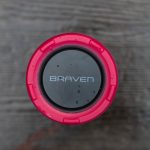 On either end are passive bass radiators to help move more air.

When it comes down to it, the Braven Stryde 360 isn’t going to blow you away in any one aspect. It has a cheap feeling build materials that not only make it nothing special to hold in the hand, but also actively fights you at times when you want to access certain ports. The sound is also nothing special with the low end not having enough push behind it considering it’s an outdoor speaker and the highs being pulled back so much it almost creates a bottleneck.

It’s not all bad though. The speaker is actually fairly durable and after a few drops and scratches is still going strong like nothing happened. It can also be completely submerged so bringing it to the pool or beach isn’t a problem. The built-in flat stand on the bottom of the speaker also made it pretty easy to orient the speaker however I wanted when I was out. I was never forced to cover up one of the passive bass radiators in order to stand it up. And the best part of this speaker is the price. At only $99 I wasn’t expecting a speaker that’s as durable as this. Sure that durability leads to some other issues, but if you’re tough on your speakers and want something that can live up to your next adventure this might not be such a bad option.