They're a little pricey for what they offer, but the Bose SoundTrue sound great and are comfortable enough to wear all day.

A little pricy
Bass may be lacking for some

They can't be all things to all people, but this is a solid pair of great sounding, barebones headphones. 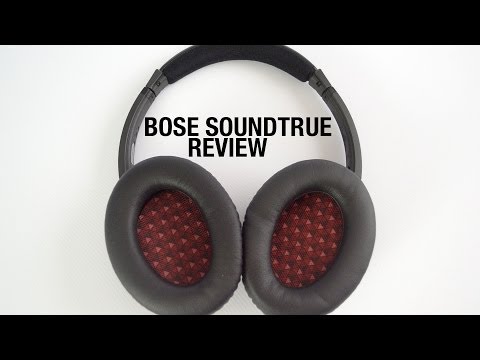 While Bose originally made a name for itself with compact full stereo systems, it was only natural that as the company grew, so would its line of products. Now, if you can listen to music through it, there’s a fairly good chance that Bose makes it – Bluetooth speakers, in-ear headphones, over-ear headphones, you name it. While Bose is still most popular for its larger speaker systems, the company seems to be committing to its push into other areas by launching its newly branded SoundTrue headphones.

The Bose SoundTrue headphones are available in both around-ear and on-ear styles, depending on your preference. For noise isolation, the around-ear models are definitely the way to go, so that’s what we’re looking at today. Do these headphones hold up to Bose’s standard of high-quality sound? Read on to find out. In my experience, Bose doesn’t seem especially keen on packing a bunch of extras into their packaging, and that remains the case here. Opening up the box you’ll see two things: the manual and the carrying case. Zip open the carrying case and you’ll be greeted by the headphones and the cable with mic and remote.

Depending on the pair you’re looking at, the Bose SoundTrue headphones look anywhere from flashy to subdued. The headphones are available in four different color options: black, white, mint, and a two-tone black/mint combo. Though we’re looking at the most “standard” color option, black, this is still an eye-catching pair of headphones.

Different colors on the outside of headphones are nothing new, but it’s far more rare that you’ll see attention to detail inside the headphones. The interior of the Bose SoundTrue is a red-tinted pattern made up of tiny triangles, and it’s pretty nice to look at. Granted, the inside won’t be seen while you’re wearing these, but the ear cups turn outward rather than inward, so if you’re wearing them around your neck, the inside of the ear cups will be on display.

The SoundTrues are both very light and very comfortable. If it wasn’t for their noise isolating nature (more on that later), I’m almost positive I would have forgotten that I had them on at some point during testing. Part of this is indeed due to the weight (4.9 oz with the cable), but these are also just a very comfortable pair of headphones. Achieving a decent fit shouldn’t be too much of a problem here either, as the cups rotate a lot and the headphones are very adjustable.

Given the lightweight nature and general slim feel, I initially had doubts about the build quality. While I wouldn’t want to be too tough on these, they’re certainly no slouch in the build department either. They’re very flexible, so they should be very resistant to most stresses. They aren’t fully collapsable, on the other hand, so if you’re throwing these in a backpack, you might want to use the included case. Speaking of which, the case, despite also being fairly lightweight, seems solidly built and should do a good job of protecting the Bose SoundTrue when you’re on the go.

I was surprised when I first plugged in the cable that is included with the Bose SoundTrue. While it seems to be a recent trend to include a cable that is barely long enough to reach from the headphones to your pocket, this cable is longer, at 66 inches. That makes it long enough that no matter where you have your phone or music player you’ll have plenty of room. On the other hand, the cable isn’t so long that you’ll constantly be getting it tangled.

The included remote and microphone offer the basic functionality you would expect, though its worth mentioning that this remote is intended to be used with iOS devices. When I tested the Bose SoundTrue headphones with an Android phone — the Motorola Moto X – the center button was functional and allowed for pausing and resuming music as well as answering and ending calls, but the two other buttons had no effect.

In testing the Bose SoundTrue I played music from a wide variety of genres and used a few different playback methods. I played MP3s, CDs and even vinyl via a high-quality headphone amp in addition to playing back music through a smartphone, as that is how the vast majority of people will likely be using these. No matter the method of playback, sound quality was excellent.

The low end is deep and well defined, but there is no overemphasis of bass frequencies here. These headphones pump out what there is in the song; no more, no less. Whether or not this is a positive or negative depends on personal taste, but unless you have an insatiable appetite for bass, you should be pretty happy.

Though there can be a slight lack of definition where the bass and lower mids meet, there is a clarity and depth in the midrange that makes the Bose SoundTrue very pleasing to the ear. Vocal details stand out especially well.

The high end is also crisp and very clear. The air and breath of vocals, fingers moving on strings, and other details you might not often notice are brought to life on these headphones, but in all the music I listened to, I never encountered anything that sounded harsh or grating to my ears.

While these generally lean toward the more accurate end of the spectrum, they don’t go quite as far as headphones meant for monitoring. The Bose SoundTrue still do a fair amount of enhancing and flattering the music that is played through them, which should be a plus for most people.

It’s worth noting that these provide a great deal of noise isolation. Even while listening to music at low volumes, I noticed that the background noise of my surroundings faded away to almost nothing, and at the same time, sound leakage from what I was listening to was nonexistent at low volumes, and fairly quiet at high volumes. This should be a great pair of headphones to wear around the office or at the library.

To paraphrase an old whiskey ad, the Bose SoundTrue Around-ear headphones sound expensive, and they are. These retail for $179.95, and for a pair of headphones that lacks Bluetooth connectivity and most other bells and whistles, this may be enough to put some people off. That said, if you lay down the cash for these, chances are slim that you’ll be disappointed.

There are two major factors that make the Bose SoundTrue headphones an easy recommendation: the sound quality and how comfortable they are. If you’re a basshead who needs massively hyped low end or a professional who needs super-accurate sound, there are other pairs of headphones that are better suited to your needs, but if you’re just looking for great sounding headphones that you can wear literally all day, you’ll be hard-pressed to find a better pair of headphones at this price point.