Too good to be true

The B&O Beoplay A1 could be the perfect speaker if the battery actually lasted a full 24 hours. 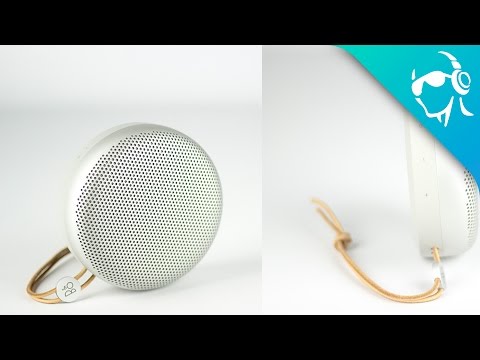 Bang & Olufsen is a company that specializes in high end AV setups, but they’ve also been making consumer priced audio products for a while now. All of which have been impressing people all over the web. So we had to see what all the hype was about. We went out and picked up their Beoplay A1 Bluetooth speaker to put it through the wringer. So how did it hold up?

When you open up the box you’ll get the speaker and a nicely built USB to USB Type-C cable. You’ll also get the quick start guide and warranty information but that’s it.

Though I wouldn’t say that the A1 is built like a tank, it’s definitely solidly built. The A1 is a round speaker with a flat back that, when you put it down, will give you 360-degrees of sound. The top half of the speaker is made entirely of aluminum and has a rows of holes poked into it in a nice minimal design.

The bottom half of the speaker is grippy, rubberized plastic that when combined with the aluminum top portion is supposed to withstand the average splash. Around the edges of the A1 are six buttons identifiable by tiny symbols, and I mean really tiny. It looks nice design-wise but isn’t the most practical since I had to pick up the speaker and really look at it every time I needed to do something. They’re also fairly difficult to press, being underneath the plastic if the bottom half. It would’ve been nice to have a little more of a click instead of squishiness.

On the left side you’ll find a multifunction button, Bluetooth pairing button, and microphone button. The right side has the volume controls and the power button. Also on the edge is a 3.5mm input for hardwiring your devices and a Type-C input for charging. The top of the speaker had my favorite part of the build: the leather strap and metal adjustment piece. It’s such a simple way to hang the speaker but it’s super practical when you want to hang the speaker up somewhere.

Though the A1 does have a 3.5mm input, you’re probably going to connect to it wirelessly. Range isn’t specified by B&O, but with nothing in the way I was able to get to about 80 feet without any drops easy. Once a few walls got in the way connection dropped drastically. It still held a consistent connection but stuttering became more prevalent in the 15 – 40 foot range. As far as playback controls the A1 is fairly basic. You can pause/play music and also adjust the volume straight from the speaker, but if you want to skip tracks you’ll have to reach for your phone.

B&O makes it a point to say that the A1 has enough battery to last you a full day of listening. A full day as in 24-hours straight, not just 12. In my testing we got a little less at about 18 hours when playing at average volume, which isn’t bad.

But on max volume battery life was dramatically reduced to only 3 hours of playback time. I thought maybe I did something wrong so I charged it back up and tested again. Second time around I got a slightly better 4 hours of constant playback. Nowhere near the 24 hours that B&O claims. After you hit 20% battery life the volume automatically adjusts itself to about half of max output in order to save battery and squeeze as much juice out of it as it can which is both useful and annoying. It also got really warm during usage. Not hot enough to burn, but enough that I thought it a good idea to do a quick Google search to see if it’s a common issue. It is.

Now on to my favorite part of the speaker. The part that I heard so much about. When it comes to sound quality, the Beoplay A1 is top notch.

For such a small speaker, the A1 destroys the low end in a very good way. The rhythmic drums and baseline throughout “Pieces of the people we love” by The Rapture sound amazing and full of life. It’s not a sound you won’t find on some larger speakers, but the A1 truly sounds much bigger than it is.

Mids aren’t as impressive as the low end, but they’re very good in their right. Vocals are definitely pushed a little bit and detail in background elements are maintained regardless of genre.

This speaker can get pretty loud, and though I had no issues with cymbals and hi-hats for the most part (especially while outdoors), some elements such as synths definitely had a certain harshness to them.

I really wanted to love this speaker, but after everything I only kind of like it. The modern design is gorgeous and the leather and metal combo really makes this feel as premium as it’s price is. It also sounds worthy of the $249 price tag, but there was still some issues that I can’t ignore. Obviously the biggest of which was battery life. To be fair it could just be my unit, but I can’t be sure. Until I’m proven otherwise 4 hours at max volume is unacceptable. The other issue I had with it were the tiny, squishy buttons. If they were maybe a little bigger I think it wouldn’t be too big an issue, but the small size combined with the weird feel just doesn’t work for me. Squishy buttons and crappy battery life aside, the A1 is probably the best looking and best sounding portable speaker I’ve tested. But it’s hard to recommend purely because of my experience with the battery.

B&O Beoplay A1 Portable Wireless Bluetooth Speaker
8.8
With A1 portable Bluetooth speaker, music lovers can now hold decades of Bang & Olufsen sound technology and experience in the palm of their hand. This ultra-portable wireless speaker delivers crisp ambient sound in a compact 1.3 lb Package. Grab it and go wherever life takes you; it charges in approximately 2.5 hours and provides up to 24 hours of battery life per charge. Created by award-winning designer Cecilie Man, this Mini audio powerhouse looks as good as it sounds: a smooth dust- and splash-resistant aluminum dome, double-molded polymer base and rugged leather strap balance cool sophistication with warm accents for a unique tactile experience. The convenient connect button allows you to pick up where you left off, activating your last played music at launch. Users can also take advantage of intuitive tone touch technology via the B&O play app to personalize their listening experience, set up wireless stereo pairing and update products with the latest software. Not just a music speaker, the A1 also lets you make calls on the go with a multi-directional microphone that increases voice recognition for everyone on the call. Lightweight but powerful.