Reviews, news, and a giveaway. 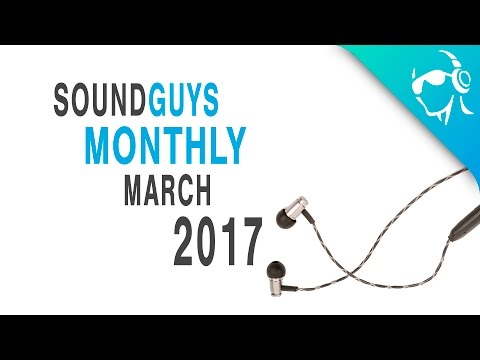 Cortana is coming to a speaker near you, B&O has a new pair of headphones, and we have another giveaway. Or do we? No yeah, we do. This is Sound Guys Monthly. The show where we go over everything that happened in the world of audio last month. A lot happened, so let’s get started.

Harman and Microsoft team up for a smart speaker Harman is a legacy audio company and Microsoft is, well Microsoft. Now the two are teaming up for a Cortana speaker to take on Google Home and Alexa. Cortana is Microsoft’s personal voice assistant like Siri or Alexa. Now it looks like Windows is ready to take her into the home to compete directly with the Google Home and Amazon Echo by putting her in a speaker made by Harman. Pricing and release date hasn’t been announced yet, but if Harman’s past speakers are anything to go by this will probably sound better than the competitors. It’s safe to assume that a B&O product is going to cost you money, but the new Beoplay H4 headphones aren’t that expensive. At $299, they’re even cheaper than some Bose headphones. These aren’t the cheapest Beoplay headphones you can get, but they’re also not the most expensive. Like anything from B&O you get a gorgeous product made by an esteemed designer. This one comes to us from Jakob Wagner. They have Bluetooth 4.2 to connect to wirelessly connect to your source device and come with a 19 hour battery life which is really pretty good if true. This wasn’t an issue until recently, but plenty of people find themselves not being able to charge their phone and listen to music at the same time. Pioneer now has a solution for you. The Rayz Plus are a lightning powered pair of ‘buds that have a Lightning input under the connector. Now if you’re sitting at your desk charging your phone, you can also listen to music. They also draw power from your phone to power the built-in ANC. It seems Pioneer is taking full advantage of the lack of a headphone jack. February is the shortest month, but it was jam packed with reviews. Of all of them, the best we saw had to be the V-MODA Forza Metallo headphones. We’ve spent plenty of time with these headphones, but never got around to giving it a full review until now. They have a durable build, good sound, and an in-line mic and playback controls. Overall, a solid pair of headphones that are still impressive at their price. This month our bang for your buck option has to go to the House of Marley Smile Jamaica in-ears. At only about $25, these are an excellent set of earphones for the money that offer sound quality as good as sets costing four times as much. They don’t offer much in terms of playback controls, but you’ll at least able to pause and play music. We spent the past month updating a bunch of our best lists, and we’re continuing to do so. But one we’d recommend you’d check out are the best Bluetooth speakers for under $50. Now that we’re on the tail end of winter it’s a good time to start going outside, and there are plenty of good speakers to help you enjoy your time outside. Best of all, at under $50 they won’t break the bank.

Last month we were giving away three pairs of CB3 Hush noise cancelling headphones to three different winners, and they are Larison U. (Philippines), Samir A. (Italy), Suzanne D. (Canada).

If you didn’t win we’re doing another giveaway this month. Remember those V-MODA headphones we mentioned earlier? Follow the links in the description to win yourself a pair.

As always, the giveaway is international so anyone from anywhere can win. Good luck everyone!